The iOcean X8 was originally shown off in renders earlier this year and only recently went on sale. This has given customers enough time to get excited about the latest flagship offering from iOcean, so has the wait been worth it? Find out in this indepth iOcean X8 review.

Being a Mediatek based, octacore flagship for 2014 the iOcean manages to keep up with the rest of the pack. There is 2GB RAM, 32GB memory, dual SIM support, 1080 FHD display, Gorilla Glass and 14.2 mega-pixel rear camera, 5 mega-pixel front and large 2650mAh battery. It all looks great, but some fans have been a little upset with the lack of SD memory expansion, none removable battery, small F2.4 aperture and lack of 4G LTE (which is currently impossible with a Mediatek phone).

As usually we filmed an unboxing of the iOCean X8 ahead of the review. The video below shows the iOcean X8 unboxing video, breif hands on and a very early first impression of the phablet. 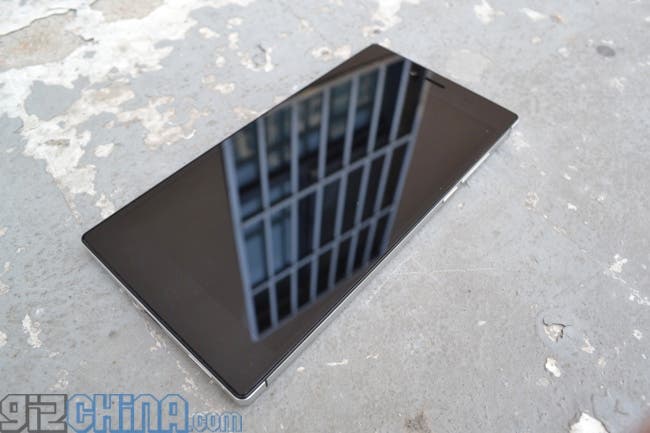 The iOcean X8 is a huge departure from the previous iOcean X7 flagship but like the X7 borrows much of its design influence from Oppo (who iOcean happen to share an office building with). While the iOcean X7 looked like the Oppo Find 5, the X8 looks more like the Oppo R1 only much larger.

This is one very elegant looking phone, and certainly looks a whole lot better than the majority of Mediatek phones currently on the market today. Not only is it good-looking but it is well made from carefull selected, high quality materials. 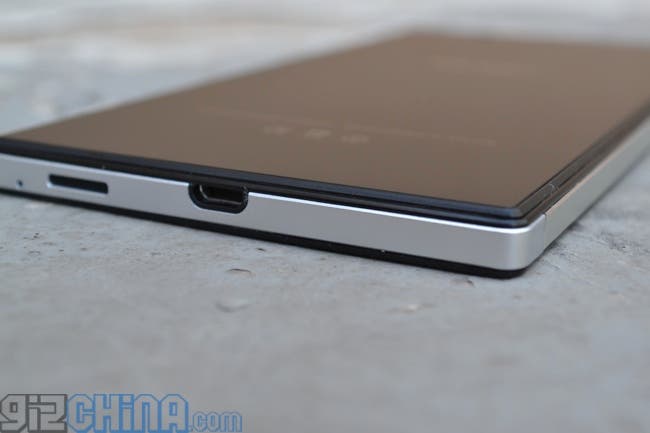 Both the front and rear panels are made of Corning Gorilla glass for piece of mind, and the designers have incorporated a very slight recess bezel design (similar but smaller than the one found on the OnePlus One). Due to the size of the recess I’m not sure it adds much protection to the 5.7-inch panels, but it does add a touch of details we are not use to seeing on a phone of this price. 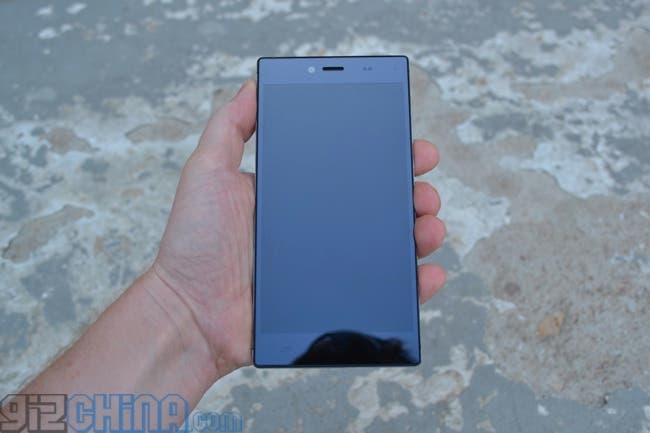 From the front we get a 5.7-inch FHD display with narrow bezels helping to keep the overall width of the phone to just 79mm. I also like the fact that iOcean havent overdone things with the upper and lower bezles, while they are still not small they certainly are less than other phones which again helps to keep the overall size of the phone to a minimum. Capacitive back-lit buttons live on the chine, while a 5 megapixel ‘selfie’ camera, receiver, and light/proximity sensors are clustered across the very top. 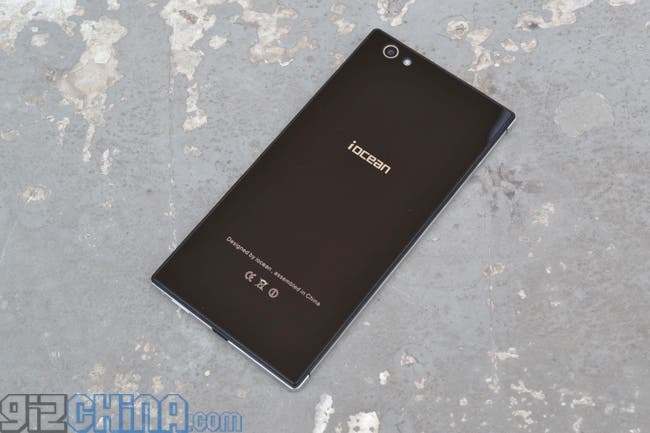 Spin the iOcean X8 over and we have another expanse of black glass and a similar look to last years Sony Xperia Z1. The top left hand corner houses the 14.2 mega-pixel main camera with single LED flash, an iOcean logo is in the center and more details are printed nearer the bottom. Again we have a recessed bezel design on the rear, but this time it is more profound and might actually help protect the phone if dropped on a corner.

Alloy adorns the sides of the phone, which is actually the alloy chassis of the phone itself. This allows the overall feel of the X8 to be of a high quality, yet light and well balanced. The alloy chassis also serves as a sturdy location for the SIM tray on the left (yes it is a dual sim tray), USB and speaker in the base, power and volume controls on the right and headphone jack in the top.

The level of design, quality and finish are all what we expect from a high-class/priced phone, and really is a pleasant surprise to see iOcean manages this level of detail while maintaining an affordable price. 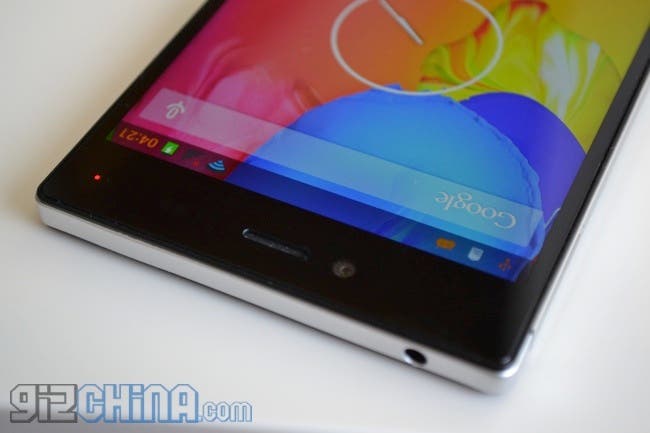 It’s great now that almost every smartphone we test has a really great display. This can be said about the 5.7-inch panel on the iOcean X7. The screen might not come from JDI (I am not entirely sure who make it), but the quality and brightness are more than good enough for the X8, or even a phone costing substantially more! 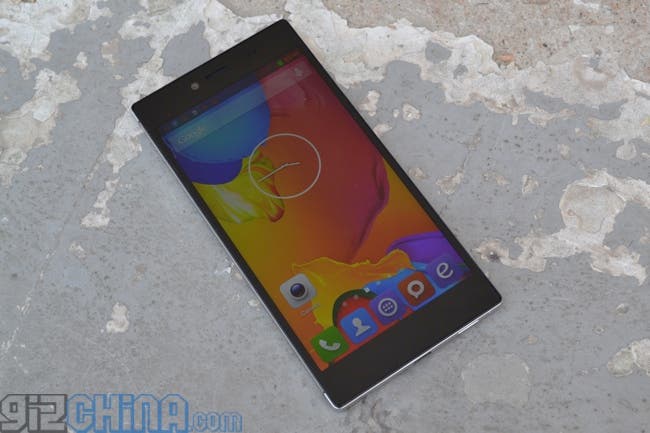 Corning Gorilla Glass 3 mean that your screen will be more durable than a regular panel, this is especially reassuring when you have such a large area to look after.

The display also has all the right acronyms worth of any flagship phone, OGS (One Glass Solution) to keep the thickness to a minimum, and offer better viewing angles and LTPS means you can use the phone in winter with gloves or even if you have wet fingers (but don’t get the phone to soaked as it is not a waterproof device). 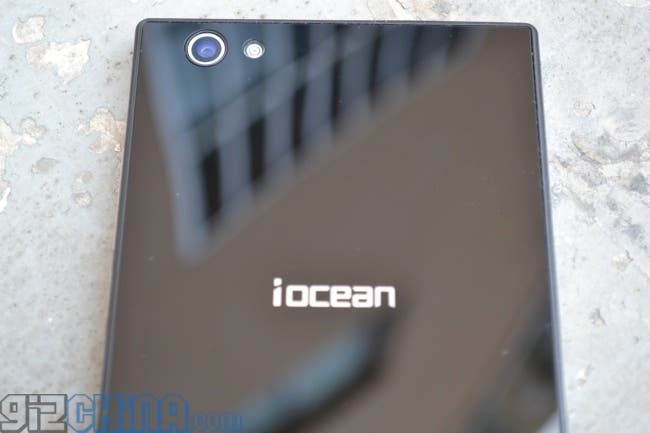 On the surface things look great when it comes to the cameras, the rear is a 14.2 mega-pixel sensor and the front is 5 mega-pixels. On paper that is better than most flagship phones which usually get a 13 mega-pixel camera, however as we all know it isn’t all about mega-pixels and features like aperture size and lens quality all play an important role too. 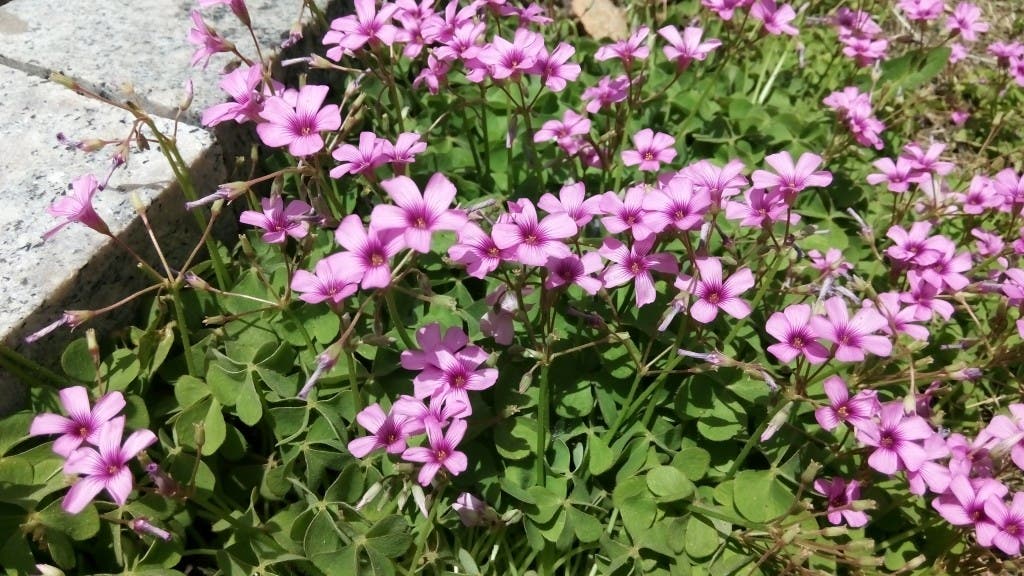 Unfortunately iOcean have skimmed on the apertures for both cameras. The front has a terrible f2.8 aperature while the rear is slight better at F2.4. This is a real shame and a very strange decision for iOcean to make. Such a stylish device feels great in the hand, and I was more than willing to get it out to show it off under the pretence of taking a photo, unfortunately in anything less than a well-lit environment the iOcean X8 disapoints. 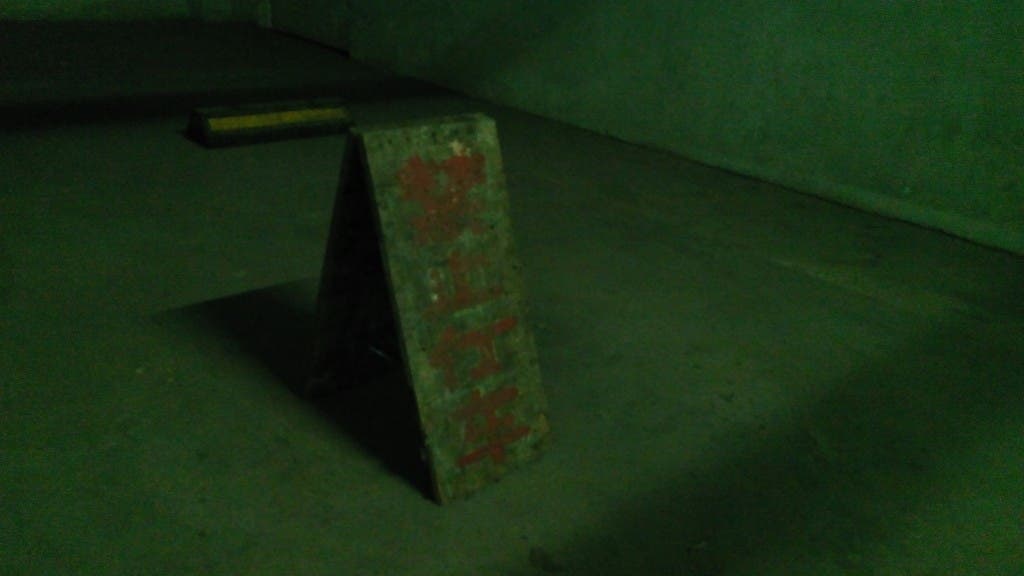 Usually on flagship phones we are seeing apertures of between f2.0 and f1.8 on rear cameras, while you can get away with f2.2 on the front. The iOcean doesn’t cut it in this department though. What makes matters worse is the camera is capable of taking nice photos during the day, and the camera app is well kitted with features, if only we had a better apertures to enjoy the camera in more instances though.

From looking at the initial specifications to actually getting the phone in my hands, performance wasn’t an issue. The iOcean X8 has a 1.7Ghz Mediatek Octacore processor, with Mali 450 GPU and 2GB RAM. This along is more than enough for everyday general apps, social media, web browsing and of course gaming.

Under test the X8 performed flawlessly while gaming, keeping up with frame rate and game spreed well, but as usual the Mediatek SoC does find advanced 3D animations a challenge but as these are generally only found in title screens and intros it didn’t affect game play.

In benchmarks the iOcean X8 performed well with scores over over 26,000 in Antutu, Nenamark 2 if 58.3 fps and Quadrant brought in a score of 13,447. There are phones with higher scores, but in real life usage the iOcean X8 performs just as well as any high-end octacore phone on the market today. 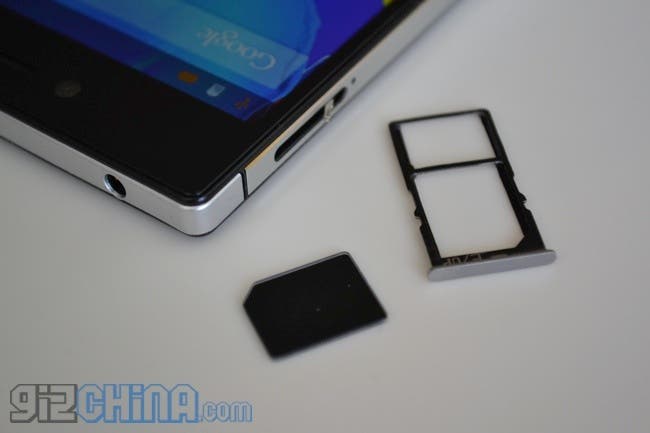 Other connectivity options included Bluetooth 4.0 and GPS. As GPS is often the week link in Meidatek phones we made sure to test this and found it to be slow to connect depending on the weather conditions taking 4 minutes the first time, but once locked the GPS remained fixed and accurate enough to use as an in car navigaion device with Google Maps.

3G, GSM and WIFI and NFC all worked faultlessy thoughout our time with the phone.

A none removable battery might be enough to turn off potential buyers, and the fact that the battery is just 2650mAh is also pause for thought. Personally I am fine with built-in batteries, but I would prefer to see something larger, 2800/3000mAh on a phone with such a large 1080 display and powerful hardware.

Under testing purposes ie taking a lot of photos, gaming, running benchmarks and generally using the phone more often than I would normally the X8 still managed to get through most of the day, with 3G and WIFI turned on. Under ‘normal’ usage ie checking email, sending messages, a few calls, a few photos and less gaming I could easily handle a day of use with juice to spare, but if I was heading out a night with the phone I did top it up to be sure I would make it to the early morning.

The iOcean X8 has been a much talked about and highly anticipated flagship Android smartphone. iOcean have got a lot of things right with the X8, but there are some really strange choices with the phone which prevent it from being a must have buy. 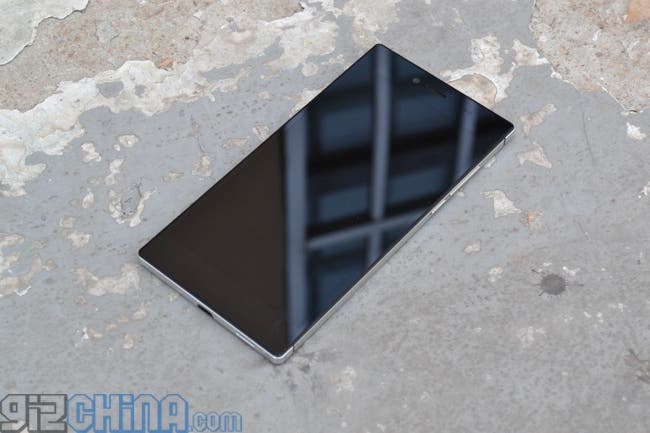 From a design, build and quality point of view the iOcean X8 is simply stunning, I cannot fault it and it really does look like a premium piece of kit. For general smartphone usage (not including photos) the iOcean X8 performs as well as any other octacore on the market, but it is in the multimedia department the problems lurk.

As mentioned above the cameras are only of any use in well-lit areas, but for a phone which such styling and design it would appeal to people you go out and want to show off their device in the day or night. The apertures on the X8 just aren’t up for low light work. Another issues is media consumption, while the X8 handles games, video and web browsing with ease, it is its lack of memory expansion which concerns us, 32GB can only last so long and with such a lovely display you are going to want to fill that memory with video and images. 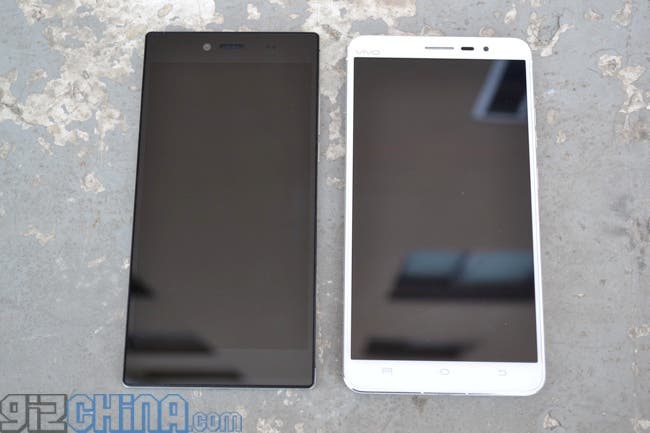 If you are more of a day walker than night owl and you want a stylish, powerful and well made Android smartphone the iOCean is for you. If you want to capture the action day or night, and intend extending your passion of photography to your smartphone usage then you will want to look elsewhere.

Next 150 OnePlus One Invites up for grabs in latest giveaway