Sheet steel invitations have been sent to members of the press in China for the upcoming Mi4 launch.

Chinese phone makers like to go that extra mile when creating invitations for the launch of their next products. Vivo and Oppo like to go down the AR route, which Meizu and now Xiaomi like to hint at body design and features.

Xiaomi Mi4 launch invites arriving at Chinese tech sites today hint at not only the shape of the coming Xiaomi flagship but also the material it will be made from. According to those who have received the invites, they are printed on steel with a brushed finish (similar to that on the Xiaomi ‘4’ launch teaser last week), and we can see from the outline the shape is close to recent Mi4 leaks.

Seeing the invite in a hand gives is the impression of a 5.5-inch phone, and a long one at that! The length of the invite suggests that the phone will have narrower borders to the side of the screen, but the upper and lower sections will have quilt a large amount of overhang.

Update: The new image above shows that the Mi4 will be as long as the current Mi3 and roughly the same width. If Xiaomi have managed to squeeze a 5.5-inch display in to this size then we could be looking at something special. 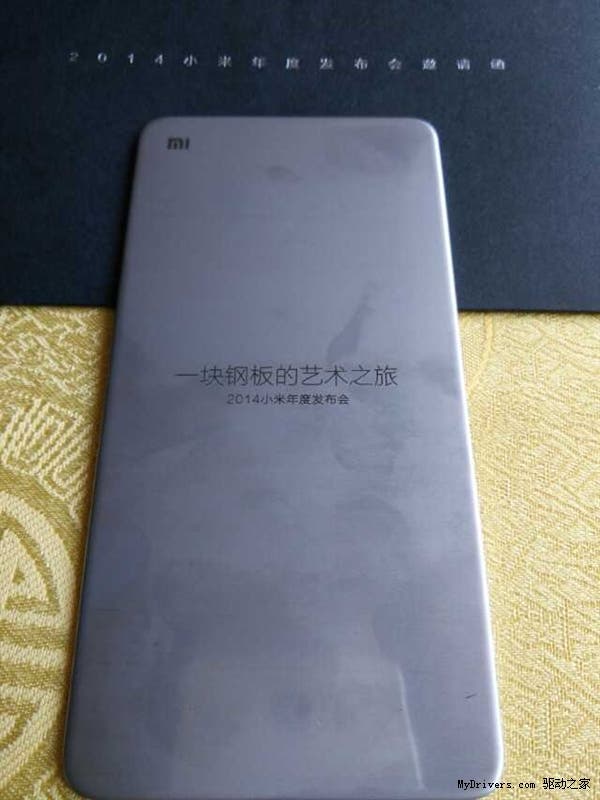 In other rumours today, the Xiaomi Mi4 is believed to have a fingerprint scanner for security. As reported yesterday the hardware inside the steel body could include 3GB RAM, 1080p display, Snapdragon 801 and 13 mega-pixel main camera all controlled by MIUI V6.