We review the THL 4400, an ultraphone that hopes to annihilate daily charging and bring more juice to you when you need it.

Do you remember back in the day? When cell phones managed to survive several days, sometimes even weeks without recharging the battery? Well, these days golden days of mobile phones could be coming back as smartphone makers strive to extend battery life. One of THL’s answers is the THL 4400, a smartphone with huge battery and some power saving spec choices.

The THL 4400 has been available in China a little over a month. This 5-incher tries to reduce power consumption by using the quad-core MT6582 mid-range processor and packs a 720p display  hooked up to a 4400mAh li–po cell to boost battery life. 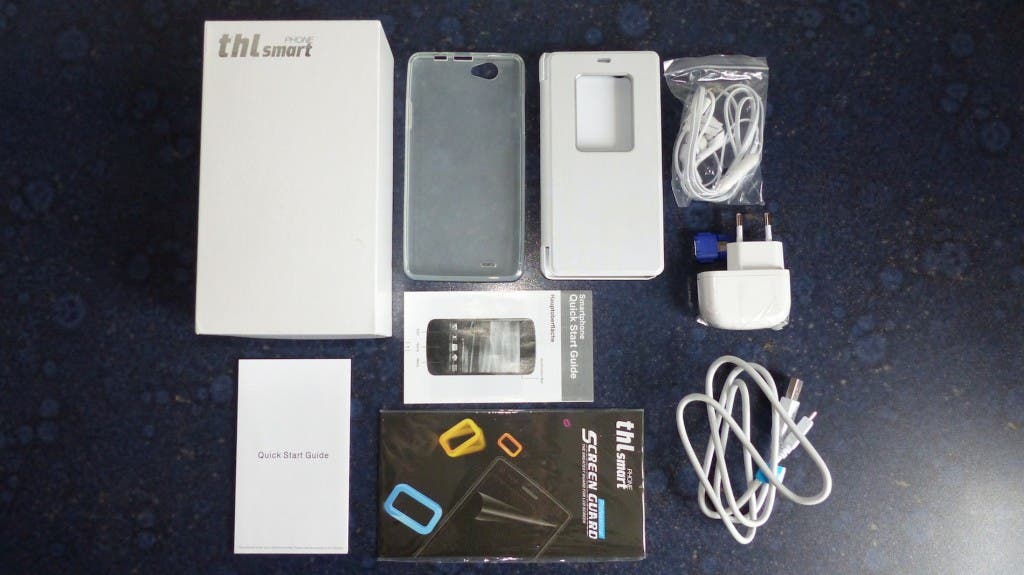 A plain white box is all that separates the THL 4400 from the outside world. On the simple packaging is the familiar THL logo and also a sticker listing the specification.

THL are very generous with what’s in the box. Upon opening the package the THL 4400 is the first item to greet you and as you move down through the layers of the packaging you come to an instruction booklet, screen protector, protective case, flip cover, USB cable, earphones, a charger and even a small Android figure/OTG adaptor. It’s good to see a nice range of accessories are included. 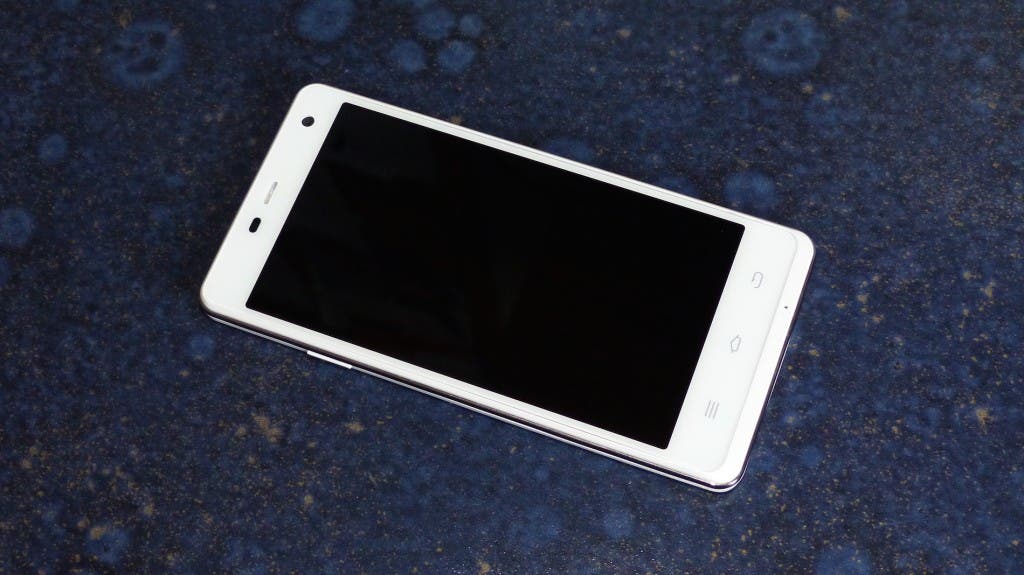 We’ve got the white version of the phone and to be honest the design is nothing really special. It is not ugly, but no one is going to award the designers an prize, and your friends aren’t likely to be jealous of the simple bulky design. Function is the key here and with this in mind it has what it needs and nothing more.

No surprises on the front, which is actually quite nice. There is a notification LED, front camera, illuminated buttons and receiver. An interesting design feature is the recessed lower section of the phone that houses the main microphone.

Around the device a silver frame can be seen, which on closer inspection appears not to be made from metal. The sides also hold the usual on/off switch, volume rocker, headphone jack and USB. The USB does the usual data and charging duties, and also has OTG support. Build is not quite to scratch and the loose-fitting hardware buttons means the phone actually rattles if shaken.

Like the rest of the phone the rear is made from plastic which has a textured finish for added grip. The rear is obviously home to the main camera, there is also an LED flash, THL logo and an external speaker in the base. 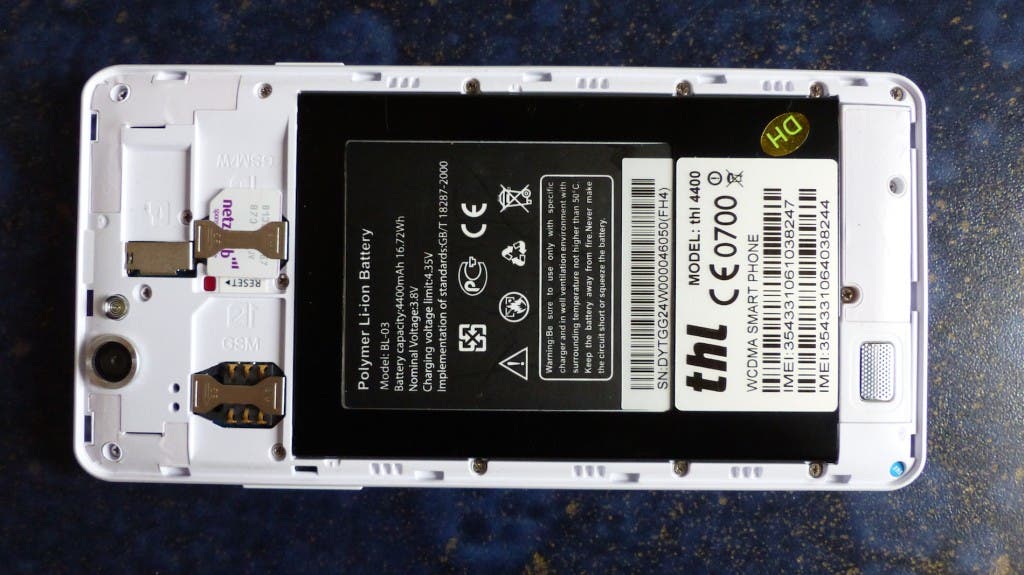 Pulling the rear off is as simple as can be. Just pop your nail under the gap and pull it off. Inside you have access to the dual SIM card slots (both normal size SIM cards) and an SD card slot. You can also get a look at the huge 4400mAh battery, however it is a built-in unit and securely clamped down with screws. 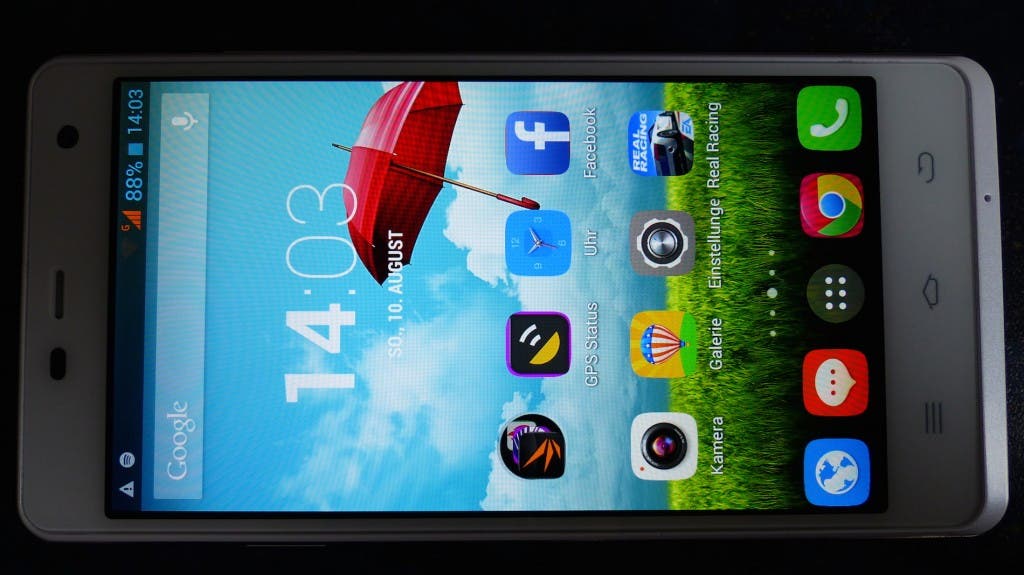 The THL 4400 features a 5-inch IPS / OGS screen operating at a resolution of 1280 x 720 pixels. If you ask why they didn’t use a 1080p panel the answer is the processor simply does not support higher resolutions. There is also the fact that a 720p display is easier on the battery life too which helps. In use a 5-inch 720p panels also looks pretty good, even in today’s world of 2K phones.

Pixels are small enough so you won’t see them during normal usage. Unless you are using your phone 4cm away from your nose that is. The quality of the panel is fine considering the price tag. Colors are reproduced nicely, but sometimes a little too intense. The brightness is extremely high at maximum settings and enough for outdoor use without needing to squint and maneuver out of the sunlight. Viewing angles are very good, confirming the screen really is using an IPS panel. The digitizer which is made from Gorilla Glass 2 is also working perfectly fine and precise, without needing excessive pressure to get it to register touches.

To get a real and fair feel for the tHL 4400, the phone became a daily driver for me. In that time I had a few of positive and negative experiences.

Firstly, let’s take a look at the ROM. Based on Android 4.2, THL haven’t really had to “rush” this one out so it surprises us a little when key features simply don’t work. In my experience the official YouTube app, for example, is simply unusable. It either fails to work or is too laggy for video to be watchable. This is annoying but hardly means the phone is unusable, but that is only the tip of it! As it is, the THL 4400 has just 1GB of memory, nothing in this day and age! What makes matters worse is that it does not seem possible to install applications on an SD card with the stock ROM! Depending on what you hope to use the THL 4400 for this could be a real deal breaker, well until the issue if fixed by THL or a third-party that is.

As far as my testing went, the rest of the ROM worked as it should. The system runs fine on the quad-core MT6582 with 1GB RAM, and most daily duties can be handled without the phone slowing down or freezing up. Gaming is ok until you get the more power-hungry ones with advanced graphic and processor needs, but this is the same for any phone running this chip and RAM combination.

For those of you who like to see performance measured in numbers, here are a few benchmarks which I ran while reviewing the phone.

2G and 3G reception is really good on the THL 4400. During the revew I didn’t encounter any issue with dropped phone calls and found the phone to have strong 2G and 3G signals throughout my time using it. Audio quality of calls isn’t as good as we hoped, and the lack of noise cancellation is a huge loss here.

THL appear to have designed and placed the antennas for the THL 4400 just as they should. Bluetooth works fine with a range f around 12-14 meters. Enough for a bluetooth speaker while having a BBQ outside. GPS is also surprisingly good for a Mediatek powered phone. The first lock took just 40 seconds and cycling trips made with the device were logged and recorded accurately.

WIFI on the other hand isn’t as good as I would have hoped. The signal strength drops rapidly as soon as you move away from your router. It never really became unusually bad, but your are probably going to experience a few WIFI signal problems once you start moving around your home.

Now we finally come to the feature that makes the THL 4400 so interesting, and this is of course the battery. As mentioned before the handset comes with a 4,400mAh non-replaceable lithium polymer cell. Combine that with the low energy screen, and processor and we should be looking at some serious battery life.

In my tests, and depending on what you use the THL 4400 for, it is possible to get an amazing 4 days of battery life out of the phone on a single charge! Even with heavy usage including gaming, video playback, GPS navigation and all that energy-sucking stuff, the phone lasts two full days easily. The average screen-on time we reached was 13 hours. Considering the fact that the THL 4400 does offer plenty of processing power as a mid-range phone, these figures are quite insane.

But of course, such a huge battery also has some downsides to it. For some it might be the high weight of 160g, which really is a lot for a 5-inch phone. But for pretty much everyone it will be the time it takes to charge the battery from 20% to 100%. Depending on the power supply, this takes between 4 to 6 hours. But considering the long battery life you get in exchange, this is still acceptable, at least for me.

The THL 4400 gets an 8 mega pixel rear camera and a 5 mega pixel front camera. The rear camera can take pictures interpolated up to 13 mega pixels. While it would create amazing pictures in terms of colors, it is not as good as phones with similar sensors. Pictures lack depth of field and show a lot of noise in low light conditions. The LED flash is not of any help, as it is way too dark. The front camera surprisingly is a little better and creates quite sharp images, enabling you to take selfies with an acceptable quality. If you aim to use this phone as a suitable camera replacement, you are not going to be impressed!

The THL 4400 is not without its problems, but for $170 is is the most feature packed phone available, and for battery life it simply cannot be beat. In the review we have pointed out a few issues, such as WIFI, lower than expected camera quality, and issues with apps and storage, these are the main points of concern, but they are also points which could be improved with future ROM updates. The problems is can we trust THL to bring the fixes to the phone in a timely manner?

As it stands though, I would recommend to stay clear of the THL 4400. If there are updates which do fix the problems I will revisit this review and update the points, but for now the phone is a little to buggy for me to recommend. Perhaps the slightly more expensive THL 5000 is a better alternative with more memory, larger battery and higher performance?

THL, you could be on to a real winner here! But until you get these issues fixed the THL 4400 isn’t going to win you any fans

Thanks to Pandawill.com for providing us with the THL 4400.