After a good few years of innovative tech, a few Chinese companies are heading back to square one — that is, making clones. We don’t do a lot of clones here at GizChina, but there’s always the one that manages to catch our eye anyway. The iNew V8 happens to be one of those. Not only is the V8 a clone of another popular phone, but it also comes with a not-so-popular hexa-core chipset that we were curious about.

Those who’ve been following Chinese tech through the past couple of years will know which phone the iNew V8 tries to imitate — the OPPO N1/N1 Mini. In fact, the V8 is very much a phone that finds place exactly in between the full-sized N1 and the knocked down N1 Mini, with its 5.5-inch screen.

In all fairness, the iNew V8 is a very interesting device. The rotating camera, NFC and the rear touch panel almost make it a competitor to the real thing. Let’s see how close it gets in the iNew V8 review!

Like we said earlier, we don’t really get a chance to review cloned phones very often. Reason why we don’t, is because cloned phones hardly have anything in them that makes us want to use them. The build quality is often much below par. But as it turns out with the iNew V8, things have changed, and for good.

That said, there’s still a lot to be desired with the iNew V8, as you shall read through the course of this review.

I’ve been quite a nomad lately, shifting from one phone to the other, so I can’t really give you a context as to what I’m coming from. But I do use the OnePlus One on a daily basis, as my home phone (WiFi only at the moment).

iNew V8 review: In the box 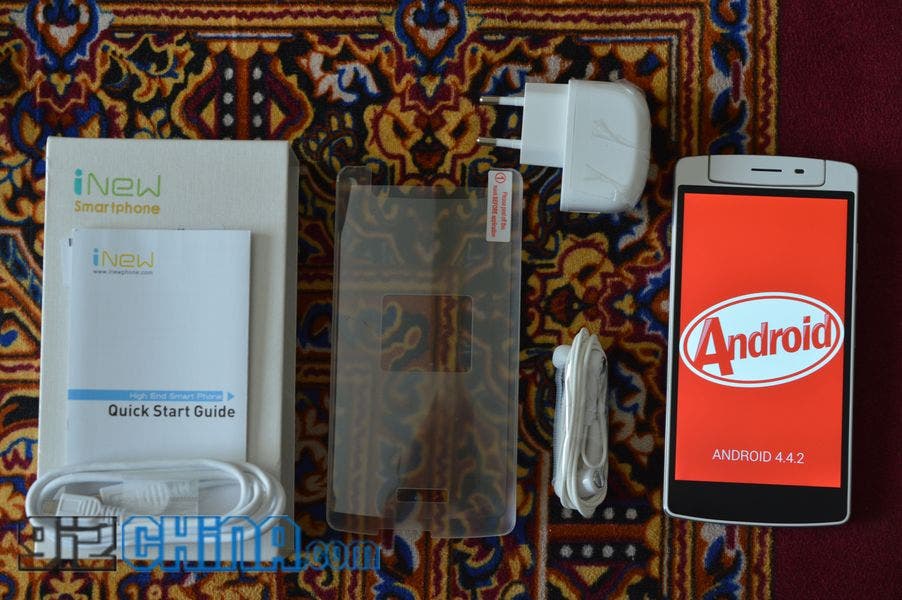 The iNew V8 was came via registered post, with a whole month of transit time. CooliCool did a great job packaging the phone, but the retail package would’ve survived even without it. The box is small and very sturdy, reminiscent of Xiaomi’s packaging in some ways; durable, to sum it up in one word.

Here is what comes in the box: 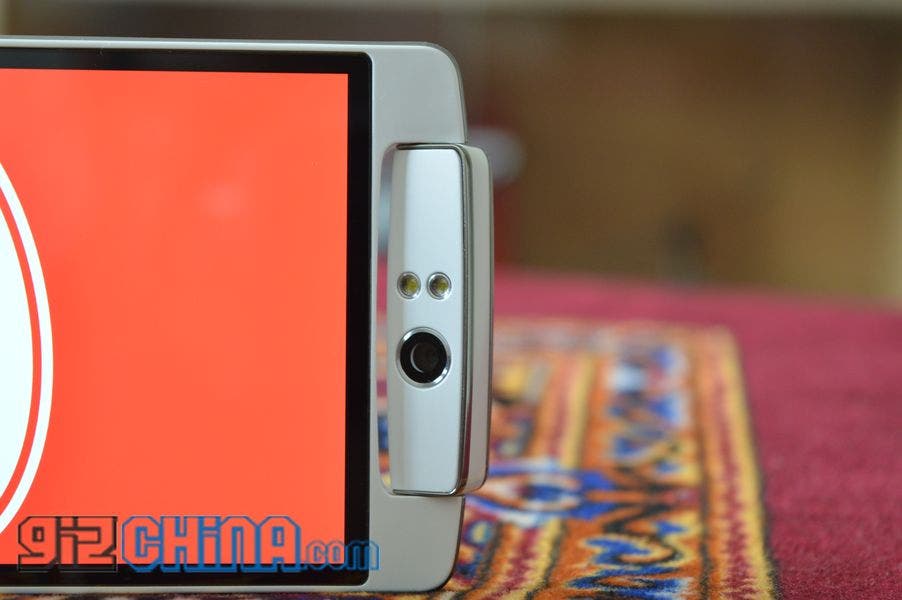 You’re already aware of the V8’s form factor; it’s a knocked down replica of the OPPO N1. Unlike the N1 however, the V8 does sport a removable rear and thus a user-replaceable battery.

Upon taking the phone out of the box, we were pleasantly surprised with the build on this baby. It isn’t ceramic-good as the OPPO N1 of course, but this is probably the best built clone phone we’ve played with. It hardly feels like one, as we mentioned, and can pass off as the original thing easily if you aren’t up to date with the happenings in China.

The body is reinforced with what looks like a strip of metal along the sides of the phone. Thanks to the bendy removable rear, there’s virtually no creaking of any sort; you OCD folks should be able to breathe a sigh of relief. 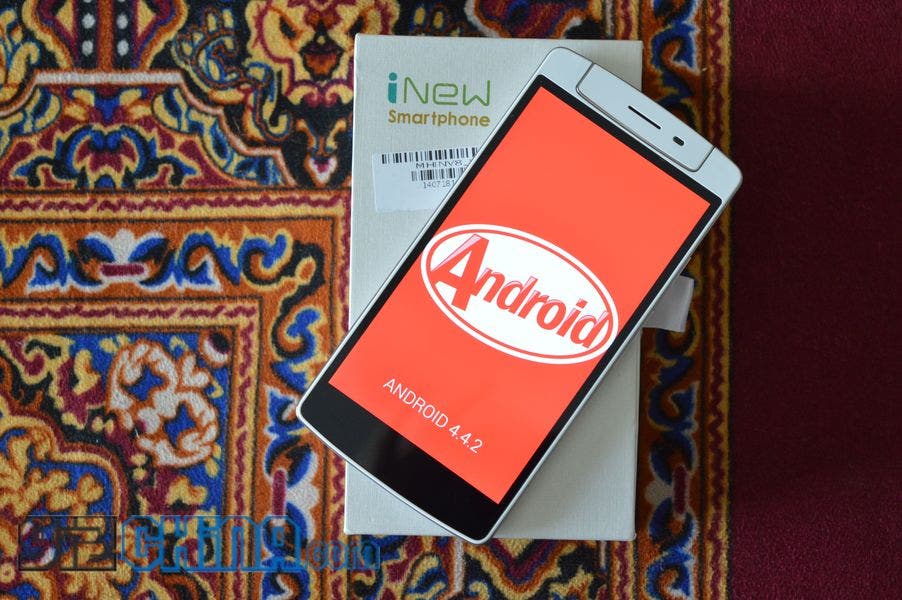 The front of the phone is dominated by the beautiful 5.5-inch display. There’s capacitive buttons below the display that are very noticeable and unlike other cheapass clones, don’t bleed with additional light. Clean and sharp, as it should be.

The top houses the swivel camera module. According to promotional flyers from iNew, this swivel mechanism can rotate through  207 degrees. We can’t really measure how much it actually rotates, but we did get a kick out of it (N1 does 206 degrees, iNew suggest they’re a step ahead). 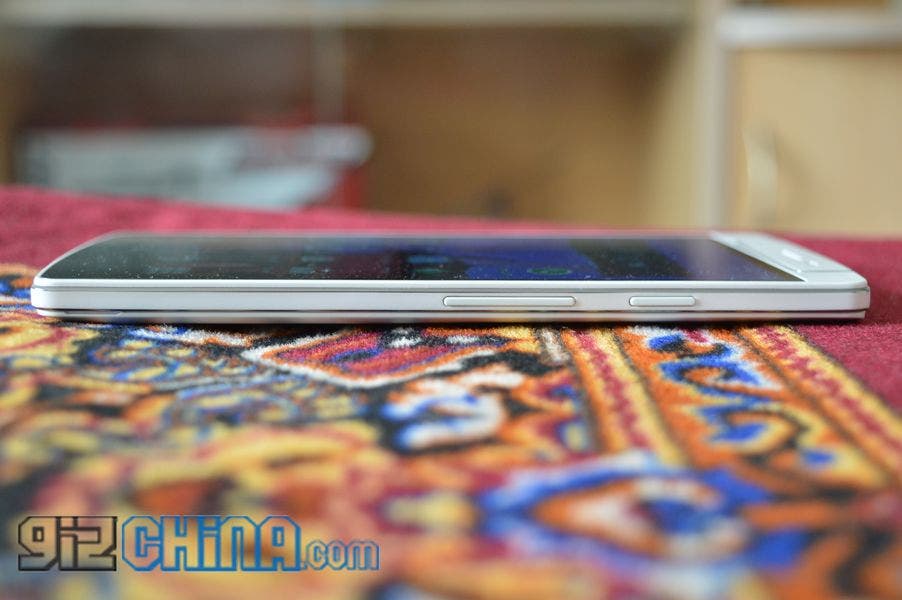 The right edge of the phone is where the volume and the power/wake buttons lie. Instead of having the more often used power key on the bottom, the V8 actually has it higher up than the volume keys which isn’t the most ergonomic solution. However, we’re happy to report that the buttons work well and are tactile enough. 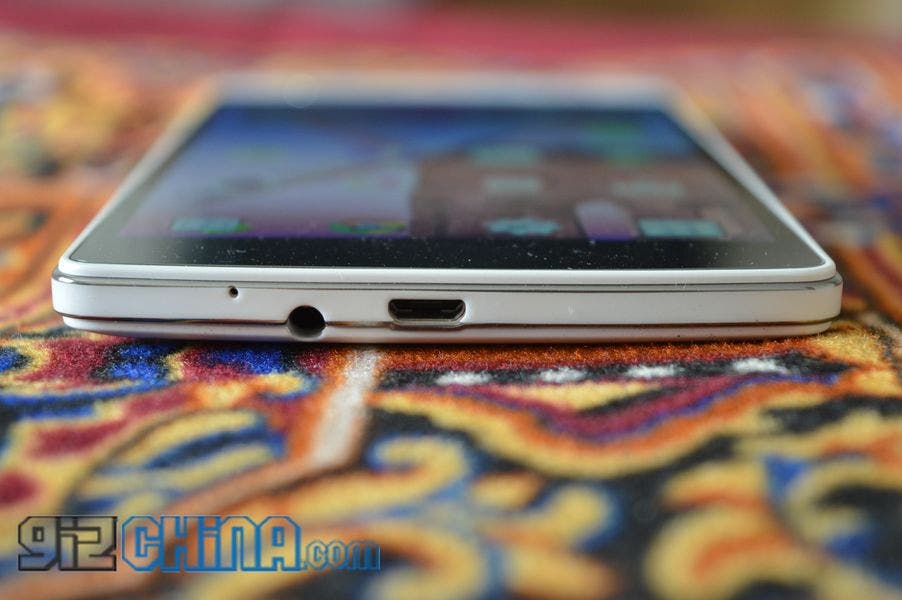 On the chin of the phone, you find mic, a microUSB port and a 3.5mm headphone jack. 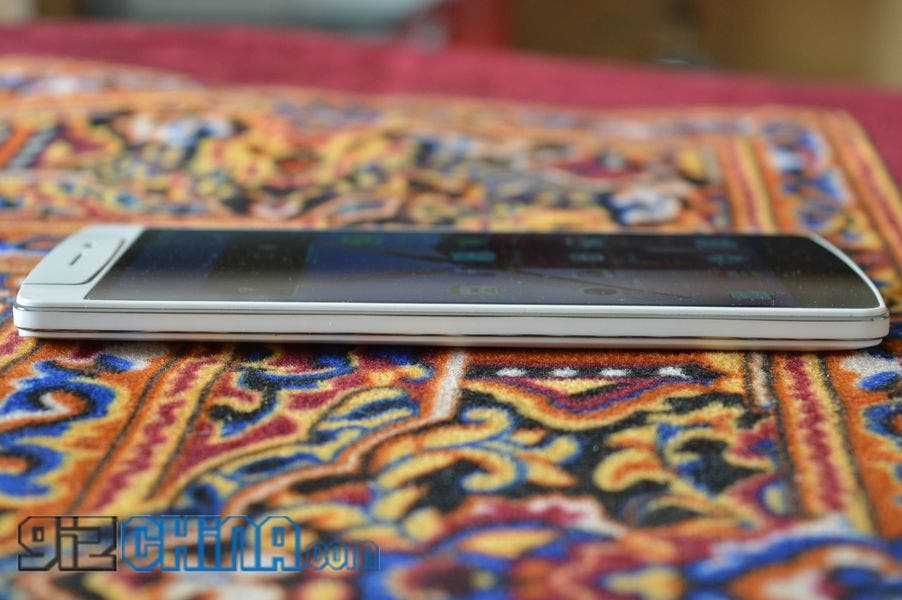 Nothing other than clean lines on the left edge of the iNew V8. 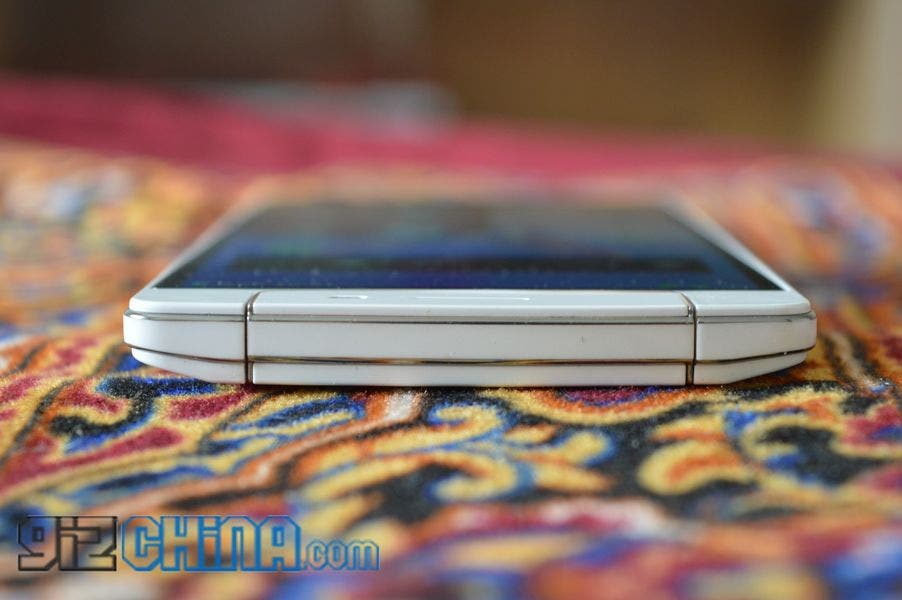 The top side of the phone says a similar story.

Also, iNew ships a hard transparent case which is a good addition for a phone like the V8. That because phones like this don’t often have a very long life in the market, so it is a good idea to prepare a decent case and ship it in the box. Speaking of the case, although it isn’t really needed because of the good build, it gives a feeling of additional security if you’re the one with butter fingers. There are appropriate cut-outs for ports and the rear touch panel as you would expect. 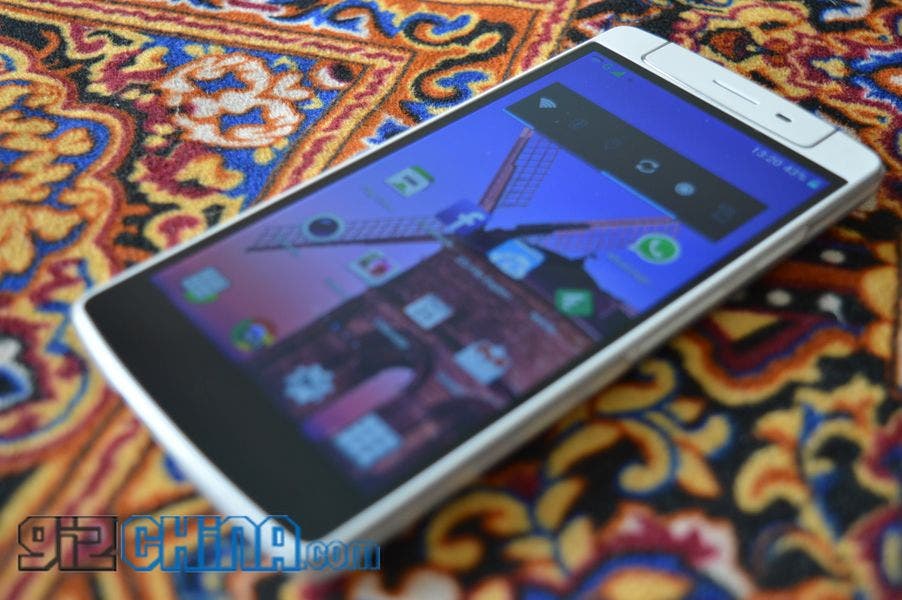 It’s a treat. It doesn’t come with a panel that boasts 2K or even full HD resolution, but at 1280 x 720 pixels, the iNew V8 has an amazing display for any smartphone, let alone a clone. It is bright enough to be usable in direct sunlight as well, but just barely like most other phones. It isn’t OnePlus One good, but it is good.

Thanks to it being an IPS panel, viewing angles are decently good. While the colours stick to themselves most of the time, they do wash away or ‘burn’ at a certain couple of angles. This by no means is a big deal though, and the display gets a good 8/10 despite not having the highest possible resolution. Also, the OGS technology gets a mention on the specs sheet of the V8, and from what we can say, iNew haven’t been lying.

Most smartphones these days do ship with decent displays, with the exception of a few. Fortunately, the iNew V8 isn’t nearly one of them.

The iNew V8 is the first hexa-core device that we’ve tested and yet again, we’ve been pleasantly surprised. The MediaTek MT6591 handles the system very well, and even though there’s just 1GB of RAM, you won’t feel the need for more unless you’re a massive multitasker. The phone is clearly a solid performer, but… there are massive improvements to be had on the stability front, as you’ll come to know later.

Here is how the V8 fares on benchmarks. What concerns us the fact that the phone refused to run full AnTuTu benchmarks, and crashed in between each time we tried.

Coming back to the firmware, although the rotating camera works well on the outside, the Android OS doesn’t seem to handle it too well. For example, it is only the native camera app that recognizes the rotation; if you try to rotate the camera to take a selfie or something to send say on WhatsApp (through the WhatsApp GUI), you’ll end up taking an inverted picture of yourself, which is totally not acceptable, especially on a phone that advertises itself with its camera the USP.

Another very serious bug with the iNew V8 happens to be the handling of phone calls/contacts. Even when your contacts list is perfectly up to date, you will often find that the caller’s name does not show. That is pretty bad, but the most critical bug that we came across on the V8 was no notification/log entry on reception of a call. Smartphones do a tonne of other things these days, but it is OS supreme importance that they make and receive calls. Although it happened only once, it is an extremely serious issue which we hope iNew addresses in the coming few days with a proper patch.

Keeping in mind the fluidity of the ROM and the serious issues that we faced, it simply isn’t possible to judge the ROM on one basis. It is like 9/10 for fluidity and 4/10 for stability/bug-freeness, we just can’t give you a single number that accounts both factors. 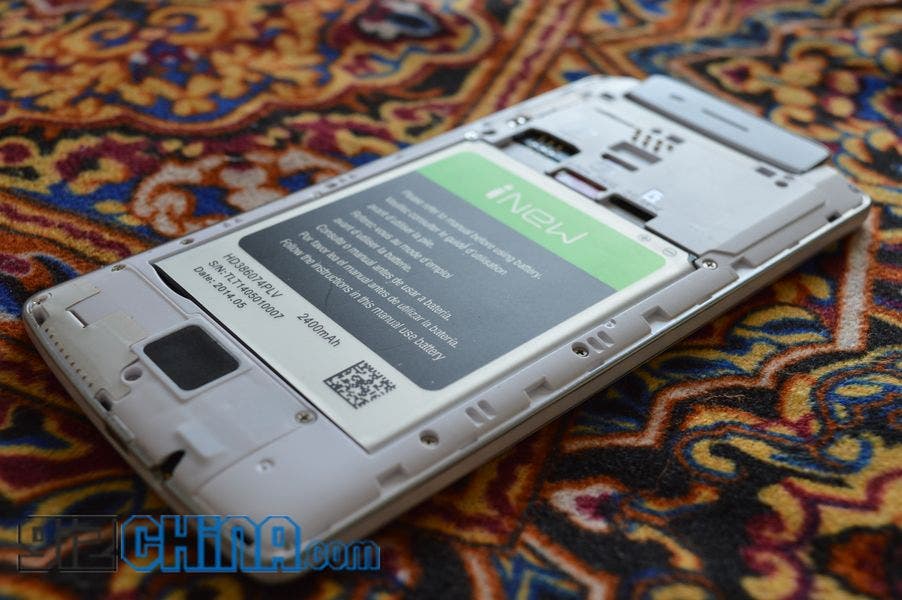 Like many other aspects of the iNew V8, we are satisfied with this one as well. While how long the V8 lasts on a single charge for you will largely depend on your style of usage, but in most cases the device will last one whole day. Without any sort of gaming, you’ll end up with close to 25-30% of charge remaining, but again, a lot depends on variables.

Depending on factors such as network connectivity, etc. we got an average of about 25% battery remaining after one day. Extrapolating on that, you arrive at a figure of 4 hours of screen on time which isn’t bad for a phone with a 5.5-inch display. 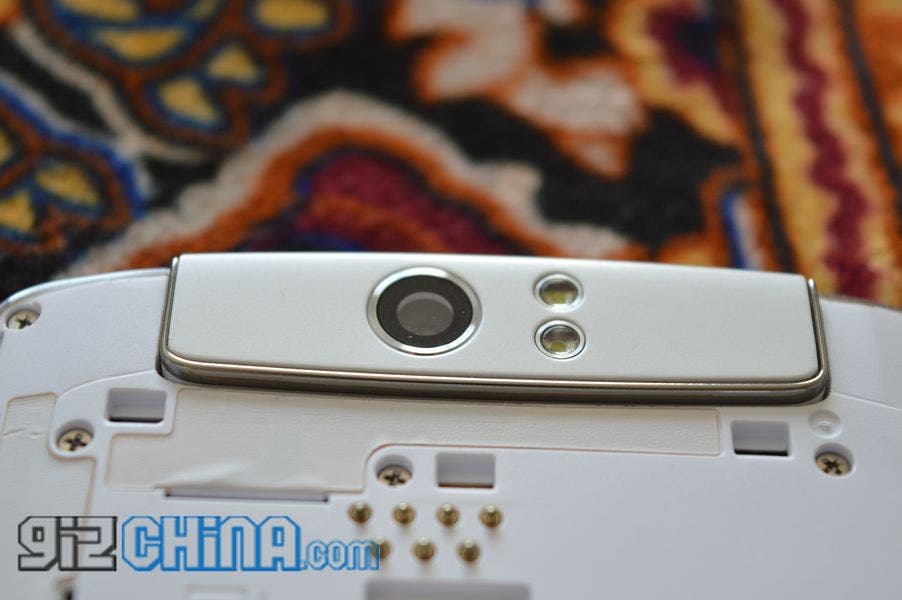 Given that it’s the camera that the iNew V8 banks upon to rake in the sales, we had high expectations from the 13 mega-pixel swivel camera. We don’t know if it was the high expectations or average performance, but the iNew V8 isn’t our favourite camera phone. The UI, for some reason, slows down by a bit when you fire up the camera app. Unlike many other budget phones where HDR is a saviour, the iNew V8 is a much better camera phone without HDR turned on.

Dynamic range isn’t the best, and you’re bound to end up with either an overexposed or an underexposed frame. Focus too, is a hit or a miss, but like many other MediaTek phones, the V8 has a close enough range to take decent-ish macro shots.

When swiveled to be used as a front camera, the V8 is decent. That is, in comparison to other front cameras which usually lie in the range of 2 mega-pixel to 5 mega-pixels in resolution.

As mentioned previously, iNew have done a good job replicating the OPPO N1’s aesthetics. This includes the ROM, which is made to look a lot like the Color OS that the N1 runs. One feature that we particularly liked on the V8 is permission management. As the name says, you can control what app gets to access what information/hardware on your phone. It can be turned on and off, depending on how bothered you are about such things. Other than that, the ROM is a bit of a mashup with visual elements from OPPO’s Color OS and sounds from… Samsung’s TouchWiz. Take a look.

Like the title of the review states, the iNew V8 is a complete mixed bag. It has a great build and a very smooth user interface, but then there are aspects where the phone lacks beyond acceptability.

Things like the AnTuTu benchmark app crashing, no notification upon receiving a call are what take away a lot of credit from an otherwise very impressive phone. Thankfully, these are things that can be fixed via firmware updates. During the testing of the phone, it ran the firmware from 11th July. We did check a couple of times for an OTA (via the ‘wireless update’ app), but there were none.

Also, something that didn’t really fit in any other category was NFC support; we’re happy to report that it works perfectly fine after testing it a handful times.

Other than that, a very average camera bogs the V8 down, and that’s certainly something that cannot be fixed via software beyond a certain extent.

All said and done, the V8 is a good phone if you care about build, decent performance and good battery, but at the same time, don’t care about the design being lifted from another existing phone.

We would like to thank CooliCool for providing the iNew V8 for review!

Next Meizu MX4 costs from $449 to international customers