Nubia have confirmed they will launch the Nubia Z9 flagship on 26th March, and now Antutu has confirmed specifications for the new Chinese smartphone.

The Nubia Z9 hasn’t really managed to remain much of a secret. The phone, scheduled for release the 26th March, was spotted in leaked promotional images ahead of MWC, then had a very in-depth and personal hands on photos shoot during Mobile World Congress in Barcelona.

What those leaked photos showed us was an alloy and glass bodied phone, but what they didn’t tell us were the spec’s, thank goodness for Antutu.

Apparently ZTE have been running the Nubia Z9 on the popular benchmarking application which has recorded the specifications for at least one of the rumoured Z9 models (it is supposed 3 models will be released in total).

From the Antutu results we can see that ZTE have apparently gone for a 5.2-inch 1080 display for their flagship Nubia Z9. A 5.2-inch display isn’t as common on smartphones as 5.5-inch but it’s a great size that offers a much smaller form factor without sacrificing too much in the way of display size. 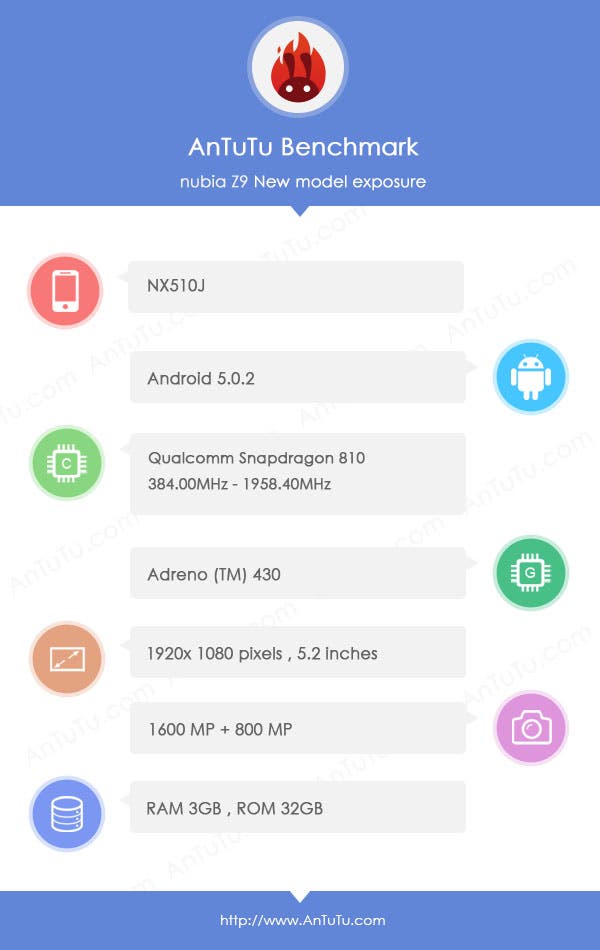 Antutu also says the Nubia Z9 will have a Snapdragon 810 chipset, 3GB RAM, 32GB memory, 16 mega-pixel main camera and 8 mega-pixel front. Android 5.0.2 Lollipop is the system out of the box, which will likely benefit from the Nubia ROM interface and features.

We will find out if these specifications are accurate in a few weeks time.

Next iPhone 6 impostors at war: ZTE Blade S6 vs. Blade S6 Plus, take your pick