Another 64-bit handset has hit us for a review. It’s the Ulefone Be Pro this time. Ulefone make quite some noise recently after being active as an OEM manufacturer for the most part and now starting to develop their own brand. They managed to achieve quite a big success within a comparably short time, gathering lots of fans among them. But how much of all that is just hype and how good are those Ulefone devices really? Let’s find out! 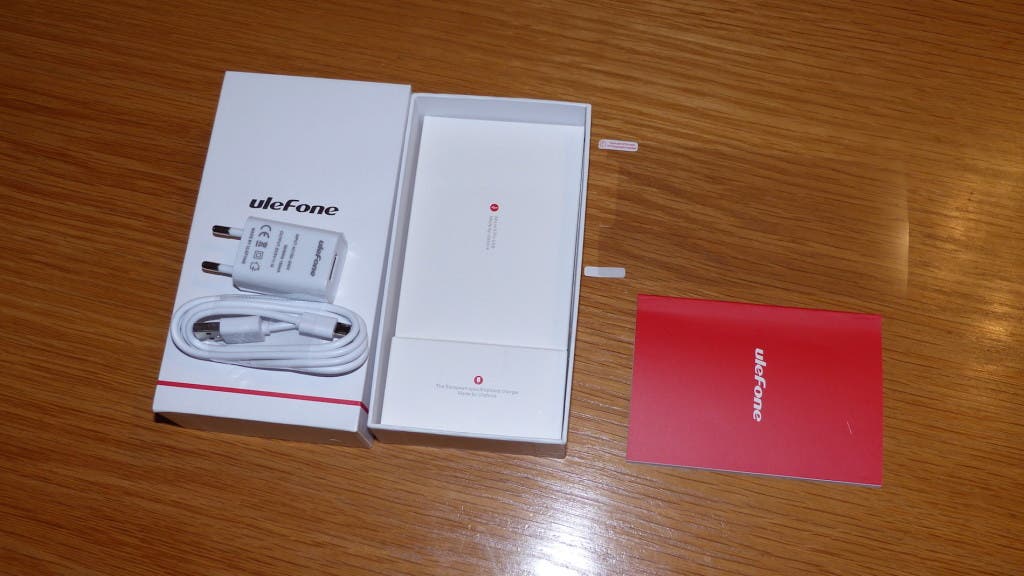 The Ulefone Be Pro comes in a surprisingly small and simple white box with the Ulefone logo right on top and a specs-sticker on the rear. Pulling it open reveals the phone. Beneath the phone Ulefone placed a protective film, a user manual and two separate boxes containing the micro USB cable and a 1A wall charger.

The Ulefone Be Pro is frequently being called a OnePlus One knock-off, which we consider only as partially true. Indeed the design language is very similar, but that’s about it. All in all the Ulefone Be Pro is far away from being a 1:1 clone. The phone does look very nice with its curved contours and the frame that does look like metal. Also the build quality is on a high level. This starts from everything being perfectly in place and ends after pulling off the rear cover just to stumble upon some LDS antennas, which definitely aren’t the norm in this price range.

But if you believe that we don’t have anything to complain about this time, you unfortunately are wrong. First of all: This handset is huge – even for a 5.5-inch device. Ulefone would’ve done good using a smaller screen, smaller bezels or another design concept. The 5.5-inch screen, the thick bezels and the metal-frame that does stand out as well add up to a whopping 156,5 x 78 x 10,3mm at (luckily low) 166g. The next part we didn’t like that much are the status LED and the missing backlight of the touch-keys. The status LED is placed too deep inside the phone, which results in it being invisible if you don’t look straight at it. Also, it somehow is extremely hard to hit the touch buttons of the Be Pro at night with just one try. Another thing we dislike about the Ulefone Be Pro are the loose hardware buttons. They aren’t shaking, but they are extremely easy to press, which resulted in us pressing them accidentally numerous times. The last part left to complain about is the rear cover. It’s curved, making the phone feel great in the hands, but laying it down onto the table will make it inoperable, as it’s moving a lot then when tapping on the screen.

All in all, these flaws make it seem like Ulefone didn’t quite think all this to the end and they should really pay more attention to such details with their next phones.

The Ulefone Be Pro comes with a 5.5-inch IPS OGS panel. Unfortunately the resolution only is 1.280 x 720 pixels. While this doesn’t mean that quality is unbearably bad, it still is noticeable through a reduced sharpness compared to a 5-inch panel with the same resolution. We also noticed that colors are a little weak, but that isn’t necessarily an issue as it simply is a thing of taste. We furthermore would’ve wished to see a better contrast with the screen, but again, it’s not bad. Brightness is pretty high, making outdoor use possible. Combining all that within one sentence: The screen does its job, but nothing more.

There is one big issue though, and it’s caused by the digitizer. Fast typing is nearly impossible on the Ulefone Be Pro, as the sensitivity of the screen is just too low. You have to put a fairly good amount of pressure onto the screen to properly recognize your input, and that can be quite annoying. We are pretty sure that this is a software issue which hopefully will be fixed with the next update.

Being equipped with Mediatek’s entry-level 64-bit chipset (MT6732) with four ARM Cortex A53 cores clocked at 1.5GHz and a powerful Mali T760 GPU, 2GB of RAM and 16GB of memory the Ulefone Be Pro does sound quite attractive. And indeed, even the MT6732 is performing much better than any MTK SoC of the previous generation – the MT6595 put aside of course. We already had a quick meet-up with this SoC inside the Doogee F1, but there the 1.3GHz version had been used. Ulefone however is making use of the 1.5GHz version, and that’s really adding some additional boom. Of course all current games are running without any lags and on highest settings on this phone, which essentially means that the overall performance is about twice the MT6592. It’s just a pleasure using devices with those new MTK SoCs.

That being said, let’s have a closer look at the phones software part. Currently, the Ulefone Be Pro is still running Android 4.4.4 KitKat. Ulefone did a pretty good job with this ROM, as they left it a plain Vanilla Android without any changes to the interface or bloatware installed. Some neat features have been thrown in though, and that includes off-screen gestures, a status LED control and an option to use the LED flash as a status LED. They also fully implemented Mediatek’s MiraVision, which is able to enhance picture quality of the screen massively, and also helps saving energy by optimizing the backlight level depending on the content displayed on the screen. Essentially that means that the more black you got on the screen, the darker your backlight gets. We didn’t stumble upon any significant bugs with the OS and were happy to see it being update on a regular basis. During the time-frame of testing this handset, we got two OTA updates. The next scheduled OTA update is Lollipop, which should arrive any day from now.

The Ulefone Be Pro’s audio quality is worth getting it’s own chapter because of two reasons. A good and a bad one. First of all, the internal media speaker isn’t bad at all for a budget device. It’s fairly loud after enabling the volume boost in settings and features slight basses and distortion free playback. Also the headphone jack does sound great with our Xiaomi Pistons v2.1. There is no background noise and the output is balanced and powerful. So that’s where Ulefone did a good job. However, they certainly didn’t when it comes to the 3.5mm jack itself. It appears to be a little too large, which results in about 50% of headphones not being compatible with this phablet. They either don’t get any contact or they only play audio on one channel, plus slip out of the jack easily. The only headphones we own that work without any issue are the Xiaomi Pistons.

Here is where the Ulefone Be Pro disappointed us once again. Being equipped with LDS antennas we expected reception quality to be up on high-end level, which unfortunately came out to be not the case. Both Wi-Fi and mobile networks suffer from a limited signal strength. We wouldn’t call it unusably bad, but it definitely is far away from being high-end. In case you live in some area with weak wireless signal you might run into issues with this handset. Something that did surprise us was GPS performance. The MT6732 as all new Mediatek SoCs does support GPS, A-GPS, Beidou and GLONASS. Together with a well dimensioned antenna, this results in an excellent performance. The GPS test you see below was done during bad weather and with buildings nearby. With good weather conditions it is possible to get a fix for up to 23 satellites, which definitely is on-par with current chipsets from Qualcomm, Samsung or HiSilicon. Ulefone really screwed it up here. If you remember back a few weeks, you probably know that Ulefone once claims the Be Pro to come with a 13 mega pixel Sony camera. Later on, this came out to be a plain lie. Instead of a quality Sony sensor, the Ulefone Be Pro comes with a 8 mega pixel OmniVision sensor that is interpolated to 13 mega pixels. Now a OmniVision sensor doesn’t necessarily mean that the camera does perform bad, as everyone owning a Doogee DG850 will be able to confirm, but in case of the Ulefone Be Pro it sadly does. Landscape shots look blurry, low-light images show tons of noise and all images show a reddish tint that results in a sepia effect. Only close-ups and macro shots get sharp. What’s more, the focus of our unit died after two weeks. It seems like the camera module Ulefone are using here is a very low-quality one, and they probably should choose another supplier for those. The front camera also takes pictures with 8 mega pixels, but hasn’t been able to impress us either.

The Ulefone Be Pro’s battery definitely is the light at the end of the tunnel. Now we already know that those new Mediatek 64-bit SoCs are very power saving, but together with the power saving properties of Mediatek’s MiraVision and the comparably large battery of the Ulefone Be Pro (2,600mAh), this handset reaches an impressive battery life and screen-on time. As usual, we tested screen-on time using PC mark. It took the battery 8 hours and 13 minutes to drain from 100% to 20%, which is what we call insane. Such a battery life is usually known from high-end phones, but definitely not a budget phone. In real-life this translates to a battery life of about 1.5 – 2 days with intense usage. And it doesn’t stop there: The Be Pro even appears to support fast charging. If you don’t use the charger that comes with the handset, but a more powerful 2.4A one instead, your handset will charge from 20% to 100% in just one hour and 20 minutes. Of course the battery can be replaced, which is another huge plus. 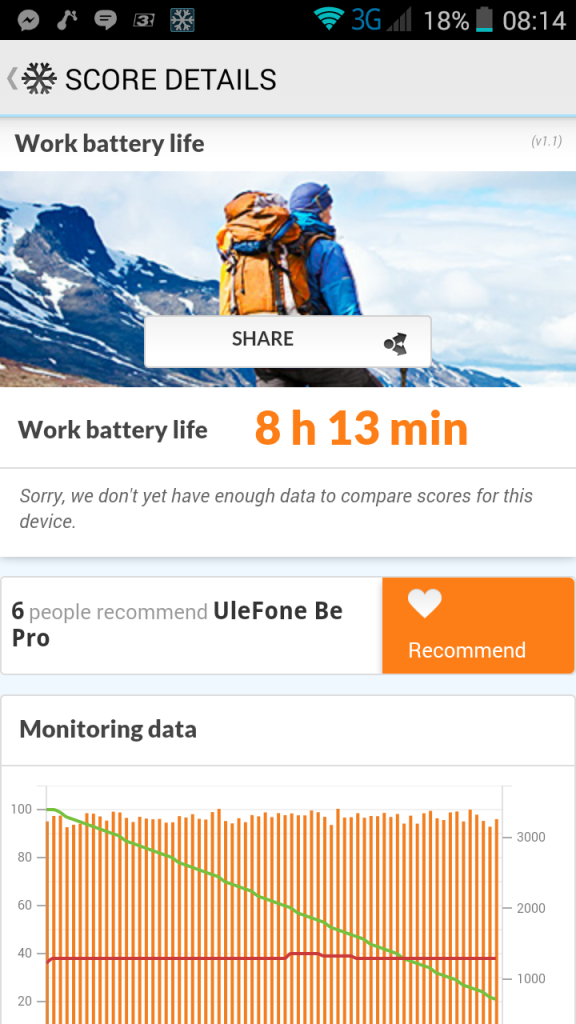 This time, building a conclusion out of all this isn’t quite an easy task. The Ulefone Be Pro is a very attractive phone with lots of potential, but it has some significant flaws at the same time, which significantly disturb the overall picture. So let’s put all stuff we learned together:

So what now? Well, taking the opinion of guys from various communities into account, we only can give you a limited purchase recommendations. You have to consider that some of those flaws might be less significant for some than for others. This is why everyone has to decide on his own if he likes this handset or not. After all it’s your money and all we can do is to show you which pros and cons are there – which is exactly what we did. Our job is done, and now it’s your turn.

Btw, we’ve got the Ulefone Be Pro directly from the manufacturer this time. In case you wonder where to purchase it, the cheapest places to buy at this time (in ascending order) are Aliexpress, Pandawill and Coolicool.