It’s been a while since I’ve been this excited about a Doogee phone. The leaked specifications of this new phone call for the excitement, as you shall read.

The Doogee DG700 Pro just leaked with the impressive Helio X10 processor (as seen on the LeTV S1) and some other powerful internals that’ll make you drool over this (in-the-making) phone. To start off, the DG700 Pro will have either 3GB or 4GB of RAM to make it a complete multitaskers’ haven. Besides, if the leaked shot is to be believed, it’ll also end your battery woes with a massive 6000mAh battery. 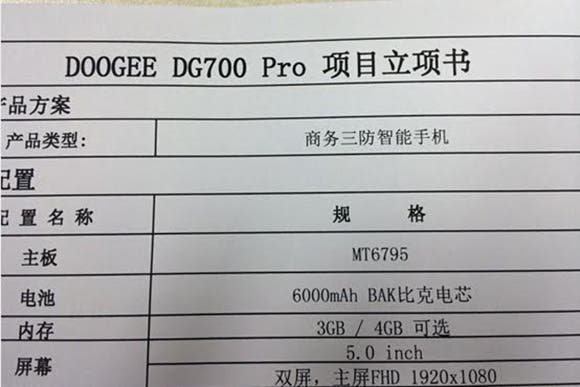 Now, that is quite a lot of tech for a phone, no? I think so too. There’s more, if you’re a fan of one handed phone usage; the leak claims the phone will have a 5-inch 1920 x 1080p display. That would be cool, because to be very honest, it has been a while since a good, powerful 5 incher came from China.

Word is that the phone will also be of the ‘rugged’ kind, so expect it to have a thick rubber shell around it. More details will be posted as they come, stay tuned!

Previous This new iBall Android tablet has a 6.95" screen, 8 core processor and a funny name