Xiaomi says that their Mi 4i is a ‘flagship level phone’. In fact, the Mi 4i launch was one of the grandest as far as Xiaomi are concerned, and it was the first device from the company to have been launched outside its home country of China.

The phone has a brilliant form factor, and is made out of materials that haven’t been used on $200 phones before. Does this mean the phone is the best in its range? Lets find out. 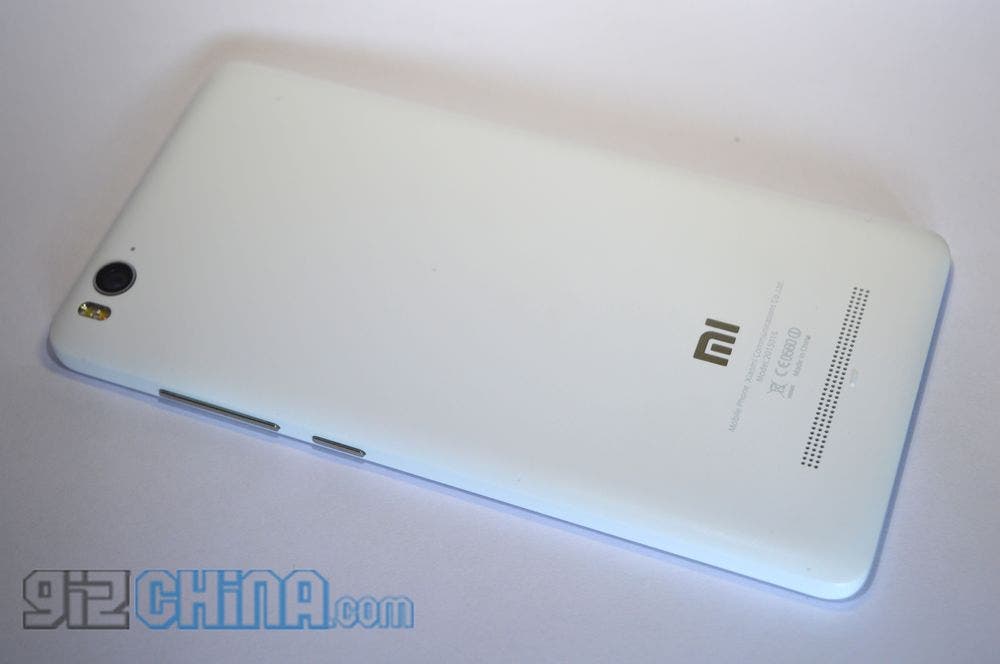 The Mi 4i is, according to me, the best designed Xiaomi phone yet. Of course, if you’re a phablet guy you’d disagree; but if you prefer one handed smartphone usage, the Mi 4i is like a dream come true. It hardly feels like a 5-inch phone, and with the comfortable and grippy back, the phone fits your hand like a charm. 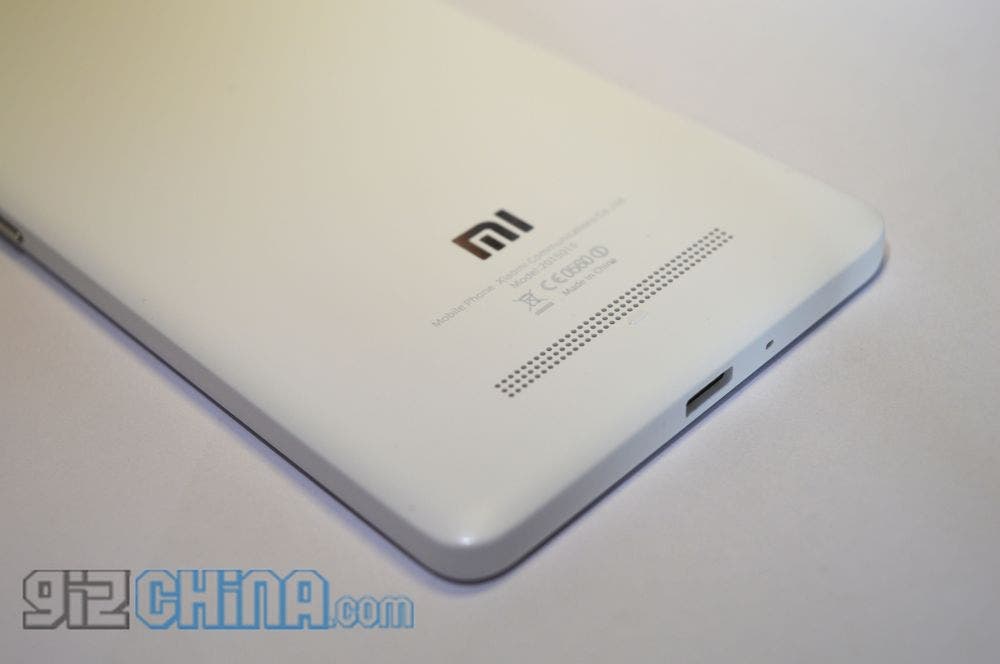 The Mi 4i is lighter and thinner than the metal clad Mi 4, and you’ll realize that within a few seconds with the phone.
As usual for most phones, the entire front is covered in glass. Xiaomi don’t specify this to be Gorilla Glass, but maintain that it is made in close co-operation with Corning (makers of Gorilla Glass). I’m assuming this is the same Corning Concore glass that the Mi 4 uses. Nonetheless, the glass doesn’t seem as scratch proof as the Mi 4; I’ve already managed to find a little scratch on the screen. 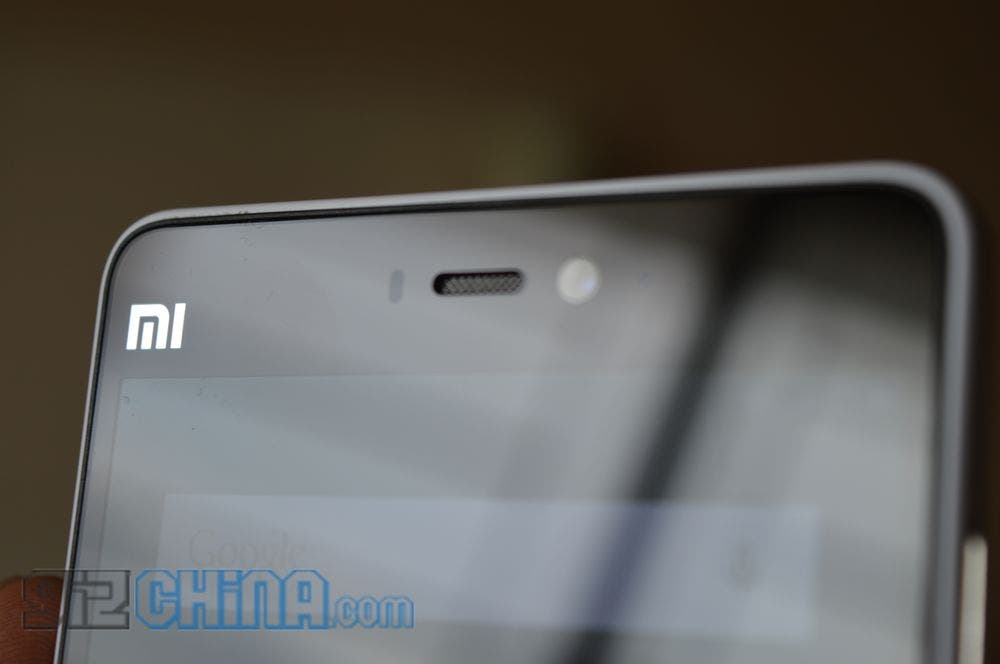 Besides that, the front of the phone is really elegant, yet simplistic. I’ve been using the white version of the phone, so the ‘panda effect’ of a black front and white rear looks really attractive. There’s not a lot of black though, it’s only on the top and bottom of the screen — and the size bezels of course.

The earpiece grill is rather tiny, which goes well with the design in my books. Compared to the Mi 4, the Mi 4i certainly looks and feels much better, there’s no two ways about it. Xiaomi did sort of get it wrong with the Mi 4 on the design, some would feel. 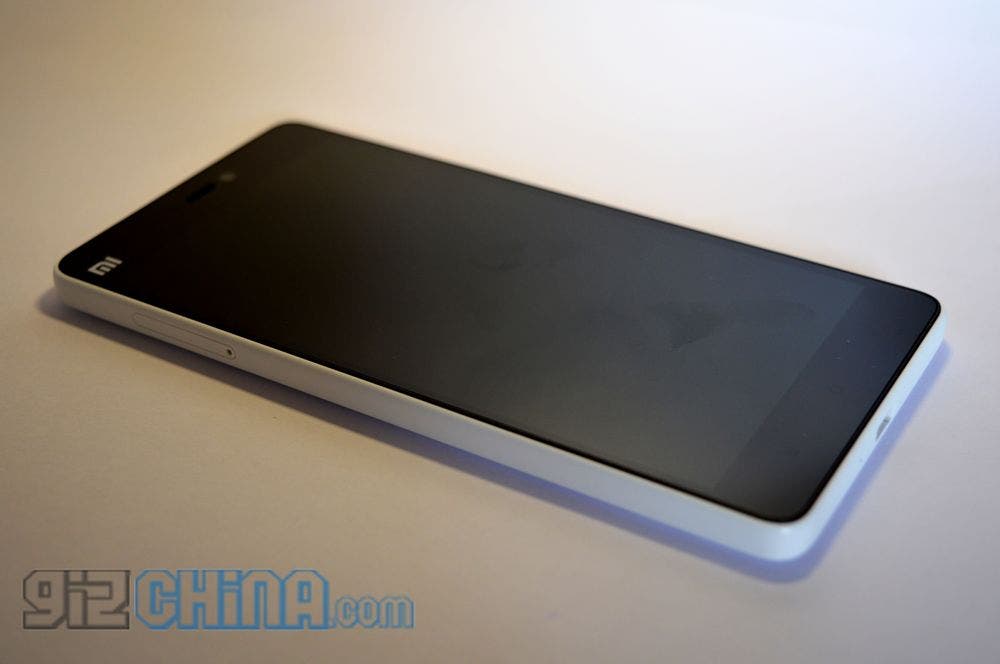 Coming back to the Mi 4i, the rear of the phone is a scaled-down rear of the Mi Note. The camera positioning has changed from the Mi 4’s center, and is now on the top left — which again, looks better in my opinion. Also noticeable are the dual LEDs, both of which throw different tones of white light.

The rear also makes home for the speaker grill, right below the Mi logo. 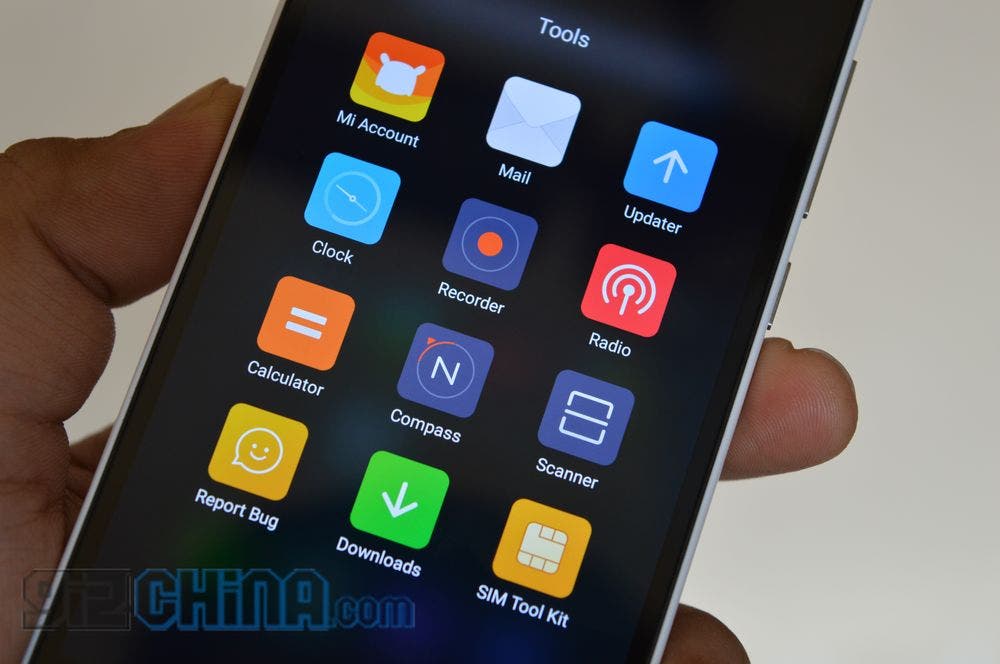 It’s pure coincidence that you’re reading about the screen of the Mi 4i right after its design and build, for these are the two best things about the phone. The screen is perhaps the best I’ve seen on a 5-inch phone; the OPPO Find 5 comes to mind among other phones with screen almost as good as the Mi 4i’s. 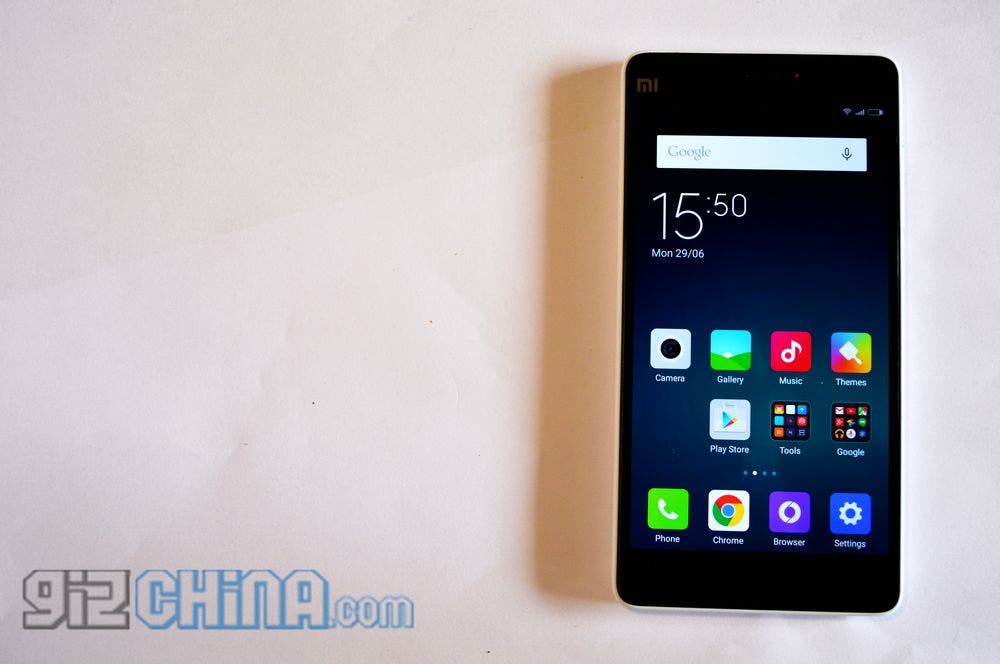 It’s a 5-inch 1920 x 1080p panel if you aren’t aware, same as the Mi 4, yet better. The color reproduction on the Mi 4i is a little more saturated than the Mi 4, but not enough to make it oversaturated. Xiaomi have found the recipe to making a brilliant display with the Mi 4i. Also, quality control seems to be right up there; there’s no bright spots, light bleeding or dead pixels on the screen.

In general, the screen is a complete treat on the Mi 4i, and is something which will invariably leave you surprised, at least at the first look. 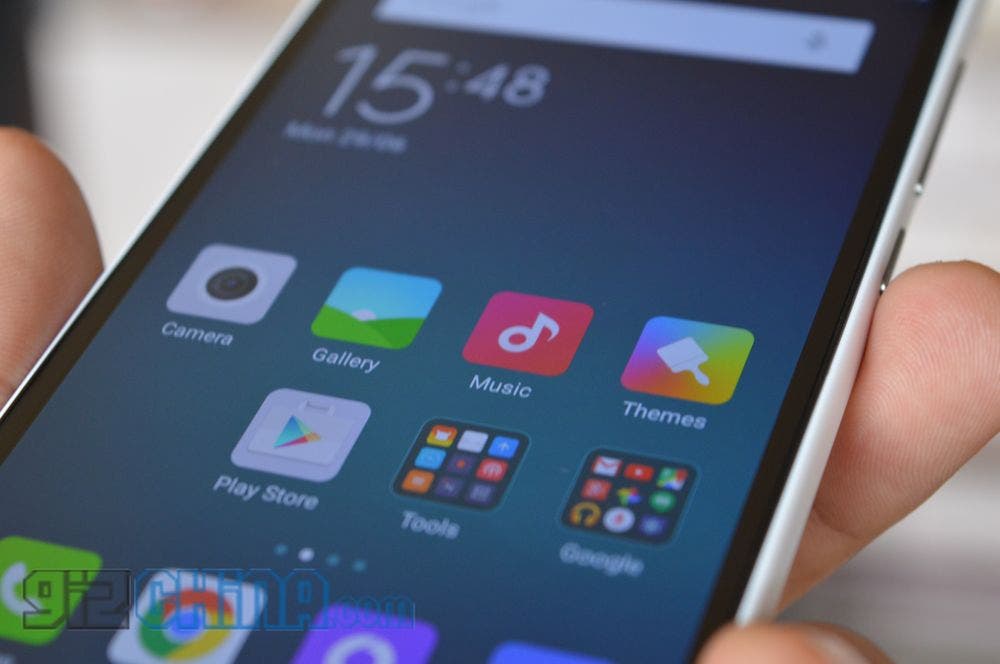 The last one year or so has been about this new category of phones that you know as the mid-range flagships. The Mi 4i is perhaps the best specimen from that category, with a flagship-level design and form, and mid-range processing.

As you may have guessed from my previous statement, the performance of the Mi 4i isn’t really flagship-level. In fact, I found the Snapdragon 615 (second-gen) to have a performance that tends more towards poor than average. On paper, the Snapdragon 615 might look like a competitor to the MT6752 or the MT6732, but it’s a completely different story in the real world. 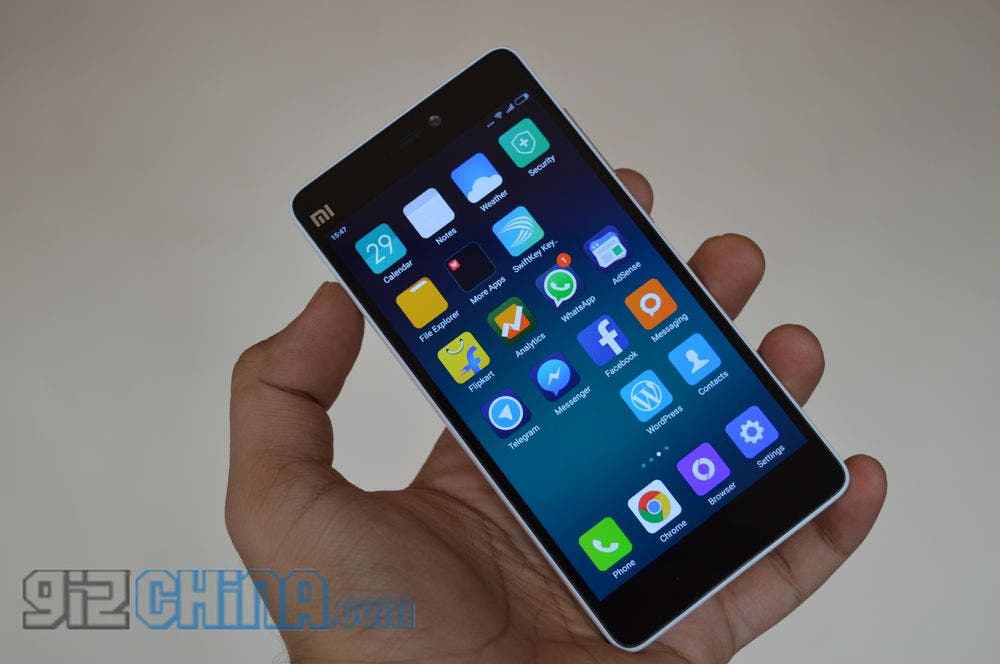 But then again, the Yu Yureka uses the same chipset (in fact, the older generation thereof) and yet manages to impress with the performance. Does this mean that the resource-heavy MIUI ROM is taking a toll on performance? Yes. MIUI is full of animations and other intuitive features that make it very usable, but at the cost of performance.

So if you only use your phone for things like taking pictures, surfing the web and say some IM, the Mi 4i would probably suffice for you. However, if you remotely use multiple apps at once, I’d strongly recommend you to look elsewhere, unless you’re open to flashing custom ROMs on the device. 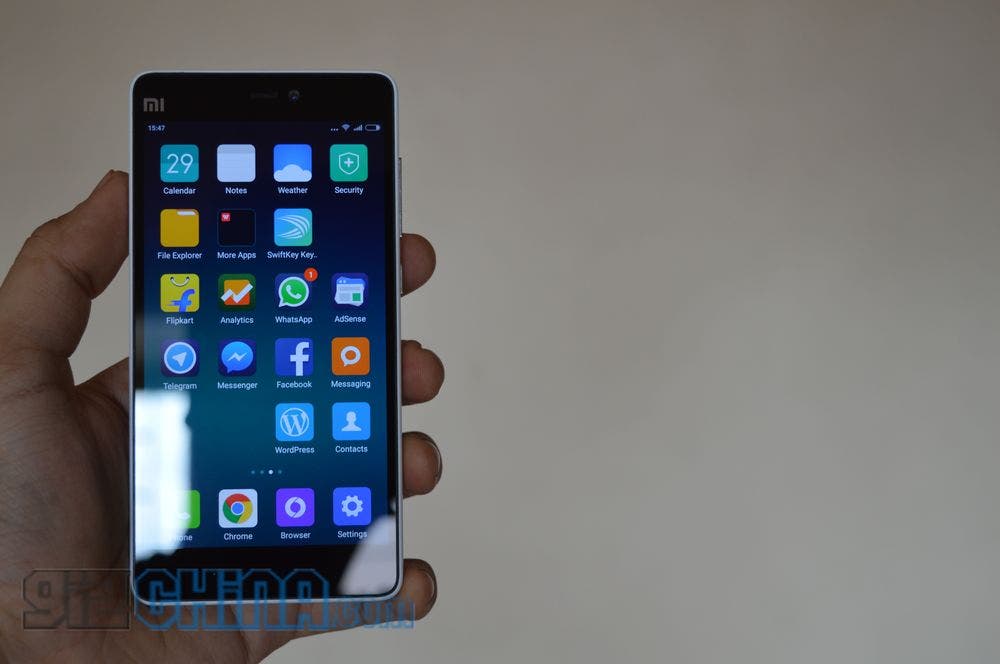 As you might already have read, the phone does heat up quite a bit too. Xiaomi keeps pushing updates every now and then, which claim to ‘fix overheating issues’, but not a lot of progress has been made on that front. Clearly, the Mi 4i isn’t one for the power user.

Here’s some benchmark scores that the Mi 4i manages. 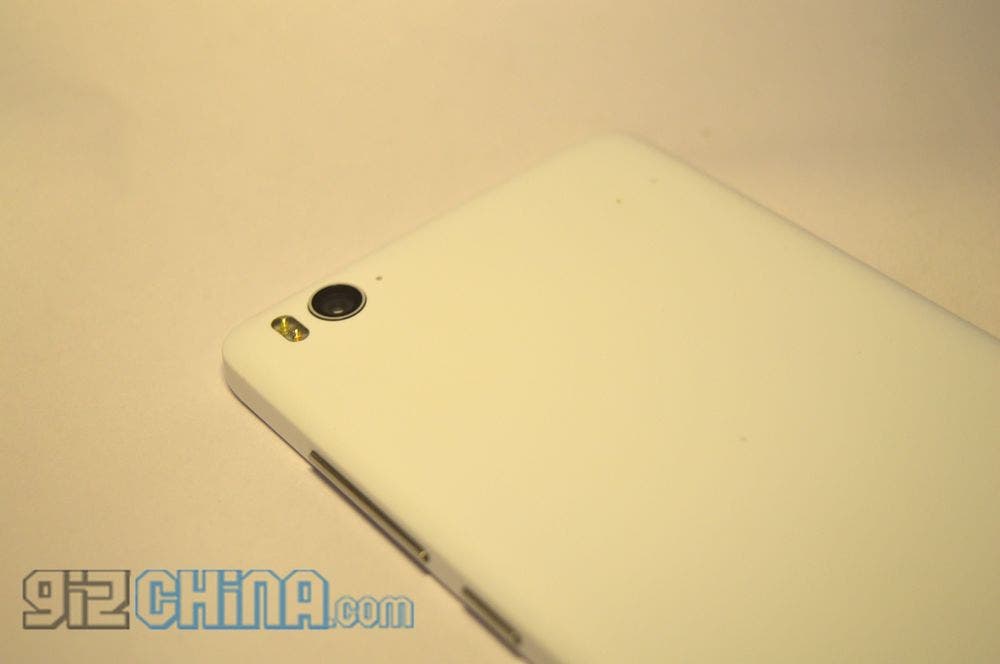 The Mi 4i inherits the camera tech from the Mi Note, so it is supposed to be pretty good. You will be happy to know that it is quite a good camera; I haven’t used the Mi Note enough to tell if the Mi 4i has a camera as good, but it’s a mighty fine camera phone in itself.

Just to run through the specifications of the camera – the rear is a 13 mega-pixel Sony/Samsung camera with a 5 element lens, an f/2.0 aperture and dual tone flash. Sure, we’ve had phones with f/1.8 and even larger apertures, but somehow the Mi 4i still manages to perform pretty well even in low lights. On the front, the phone has a 5 mega-pixel f/1.8 shooter with an 80-degree wide angle.

Almost any decent phone will give you good results in daylight, but what sets a good camera apart from an average one is the low light performance. As you see from the samples below, the Mi 4i does a great job in the night and other low-light scenarios too.

If you aren’t aware yet, you might be surprised to know that the Mi 4i comes with the largest smartphone battery Xiaomi have ever shipped. This means that the Mi 4i has a bigger battery than the Mi Note AND the Mi Note Pro, which is pretty weird. And impressive, for the Mi 4i.

It’s a 3120mAh non-removable cell which performs really well. Somehow you don’t get OnePlus One-levels of battery performance, but what the Mi 4i does with the 3120mAh cell is something you wouldn’t really mind, and perhaps like if you’re one who knows what to expect from a $200 phone.

With non-hardware intensive usage, you’ll get close to 6 hours of screen on time with every charge, which is pretty impressive for a phone that doesn’t cost a bomb. I’m also pretty sure that if Xiaomi manage to fix the heating problems (up to an extent), the battery life would get even better, as Le Chatelier’s principle states.

In general, the Mi 4i will last you a day pretty much regardless of how you use your phone. In my case (virtually no gaming), I got close to a day and a half on a single charge on most days.

Cell radio, WiFi and GPS reception isn’t usually a problem with companies like Xiaomi. In fact, from the Xiaomi phones I’ve used, I’ve come to realize that the company uses some of the best antennas on its phones, and the Mi 4i is no exception. WiFi performance is pretty strong despite having a lot of WiFi interference. GPS and cell radio reception too, are satisfactory. GPS did take a while to get its first fix, but since then performance has been much better. 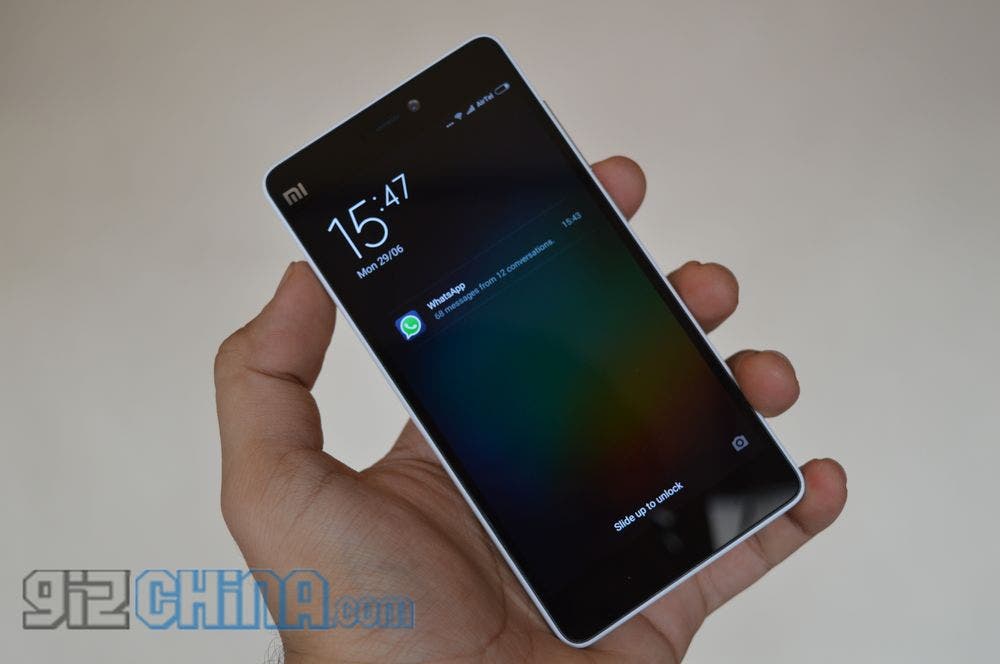 This is where I believe the problems of the Mi 4i lie. A brilliant phone otherwise, the device is let down by stutters every now and then along with apps being force closed. 2GB of RAM should usually be enough for usual daily activities, but that doesn’t really seem to be the case with the Mi 4i.

Besides the stutters and FC’s, the MIUI 6 ROM (based on Android 5.0.2 Lollipop) is a visual treat as usual. Of course there is the iOS inspiration, but MIUI is a ROM born out of the need to incorporate more features, while on the other hand, makers (especially Chinese) have been dishing out new ROMs just for the sake of it.

Xiaomi do provide regular OTAs, but it looks like some of them are pushed in a hurry. For example, the OTA update to MIUI 6.5.5.0 literally rendered the front camera unusable for those who did install the update.

For example, take a look at the picture below, taken on the front camera of the Mi 4i (it wasn’t particularly a low-light situation). The issue is quite a massive one, and its surprising the testers didn’t report this to Xiaomi before the update went live. More info on the issue can be found on the MIUI forums. 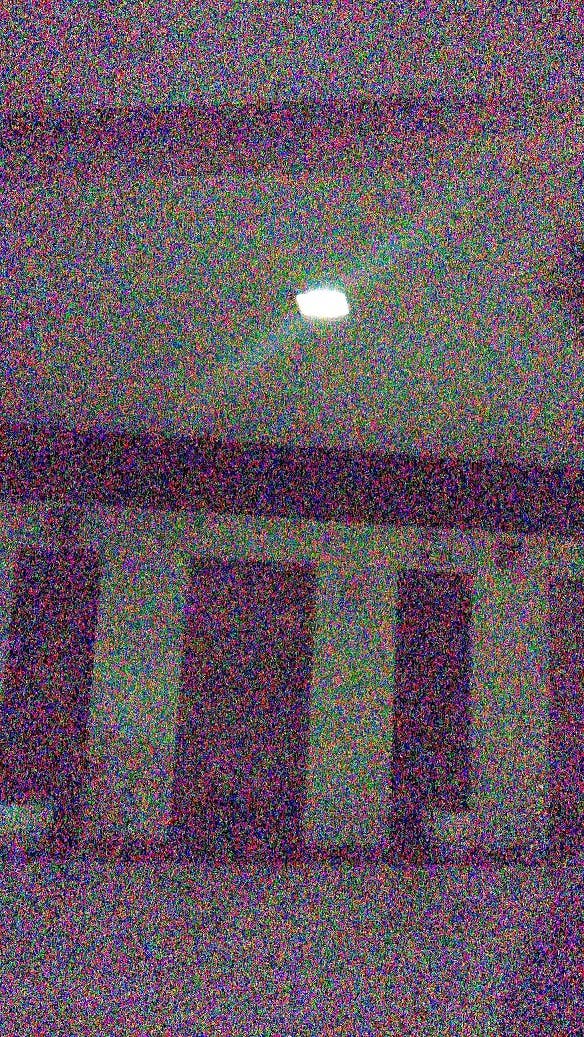 This isn’t something you expect from a company like Xiaomi. 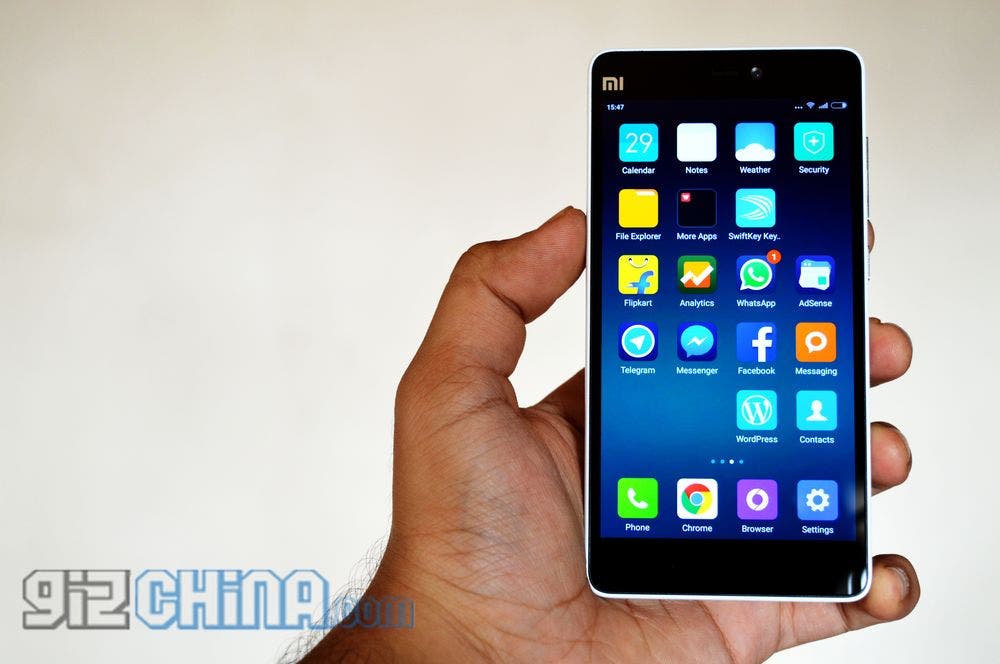 The Mi 4i scores heavily on build, display and camera, but is unfortunately let down on performance. At the first look, the phone is bound to impress you with all its glitz, but as you start using the phone and install your usual suite of apps, the disappointment slowly creeps in. It wouldn’t be unfair to say that the US$110 Elephone P6000 with the MT6732 feels a lot smoother in performance than the Mi 4i.

For the first few hours with the phone, I truly believed I was looking at my next ‘daily driver’; but as it turns out, there’s going to be more waiting to do.

Xiaomi still have the opportunity to make it up with frequent and effective software updates, which they seem to be doing. Nonetheless, if you are looking for a 5-inch phone in the market and want a Xiaomi, the Mi 4 with the reduced prices, in my book, is a much better bet despite a lower quality screen and perhaps a camera that doesn’t quite match the Mi 4i’s.

International buyers in countries where the Mi 4i isn’t available can purchase via HonorBuy.com, who are offering the phone for 265 Euro with free shipping.

Previous Ulefone Be Touch 2 offered for $179.99 for a limited time

Next Xiaomi Mi Note now from only 1999 Yuan in China