Oukitel claims to have been around since 2007, but the U8 is perhaps the first phone that you, like me, will have heard of that comes from the Oukitel facilities. The chipset powering the phone is the new MediaTek MT6735P 64-bit entry-level SoC, which is clocked at a surprisingly low 1.0GHz (988MHz to be precise) on the U8.

That clock rate does sound astonishingly low, but as you’ll learn through the course of this review, it isn’t as bad as it sounds. The Oukitel U8 also features a fingerprint sensor on the rear (right below the camera) which doesn’t require you to wake the device before having your fingerprint scanned. That’s also why the phone is called the ‘Universe Tap’.

How does all that work out to be in the end? Find out in this review of the Oukitel U8. 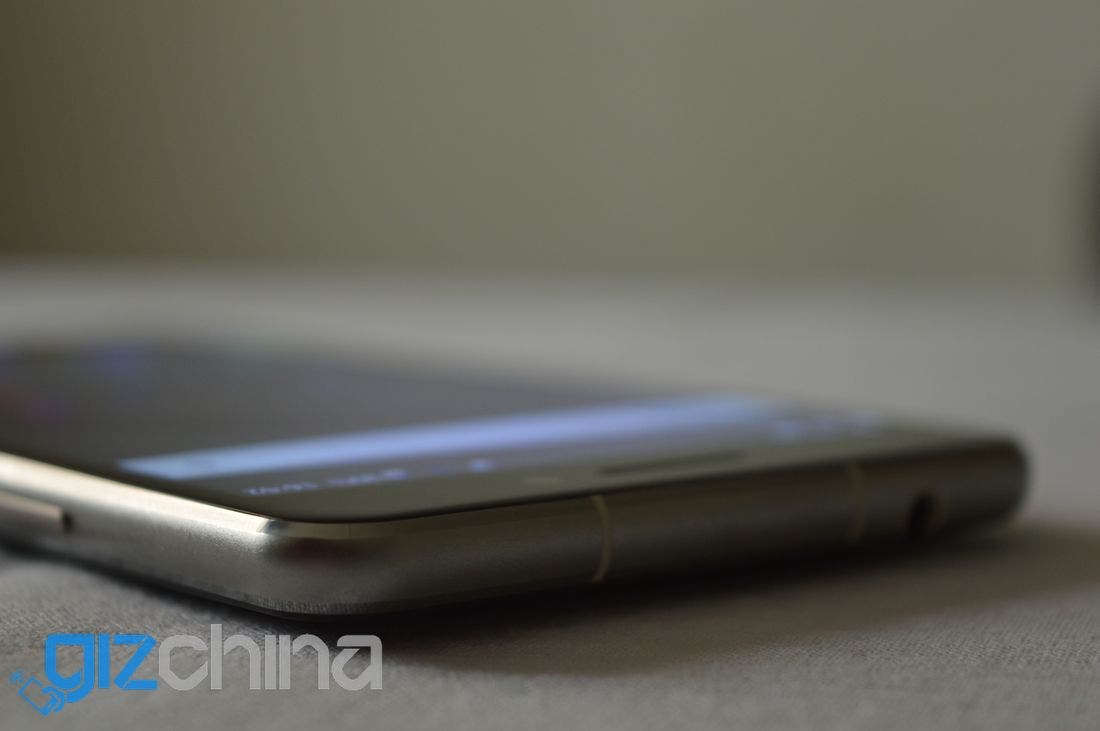 The U8 takes obvious cues from the iPhone 6. The number of Chinese phones that do that are so high that it doesn’t even seem like an anomaly anymore. That said, the phone per se is a very elegant piece of kit, something that certainly doesn’t seem like a $140 device.

Another thing that you will notice right off the bat is the fact that the phone is pretty heavy… a little too heavy for the most part. It is probably a tactic employed by Oukitel to make the U8 feel more premium than in actually is. When you hold the phone in your hands the first time, it certainly does the trick and leads you to believe it’s a device worth more than it costs, but once you start using the phone on the move, the side effects of the extra weight can be felt.

In fact, the phone managed to slip out of my hands more than a couple of times… thankfully the drops weren’t more than 2-3 feet. I’m not sure if any sort of bumper cases are available for the U8, but if they are, you should totally get one for it’ll make the phone a lot more grippy. The combination of a lot of weight plus the slippery metal (on the sides) makes the device easy to slip out of your hands.

That’s perhaps the only flaw you’ll find on the U8 build and design wise. Other than that, the phone is a top device with curved glass in the front, a non-removable rubbery-plastic back on the rear, and of course the metal on the sides (with plastic cut outs for antenna reception). Also unlike some other phones that have launched of late, the Oukitel U8 doesn’t seem like it shares the same OEM with another device.

The 3.5mm audio and the micro USB ports are reinforced with additional plastic on the insides.

You’ll find the power and the volume buttons on the right edge of the device, with the SIM tray on the left. The SIM tray, and the buttons, are exceptionally high quality for a US$140 phone. The buttons have the exact amount of ‘click’ you’d want and don’t have any play whatsoever on them.

The rear is a little dull design wise, but I guess its effective to make and use. One thing to note is that the camera lens does protrude a bit at ~2mm, which isn’t much but then it is still something you will want to know before placing the phone on an abrasive surface.

That’s pretty much it about the build and design of the Oukitel U8. I’d say that the U8 is among the better built phones in its price range despite the unnecessary additional weight. 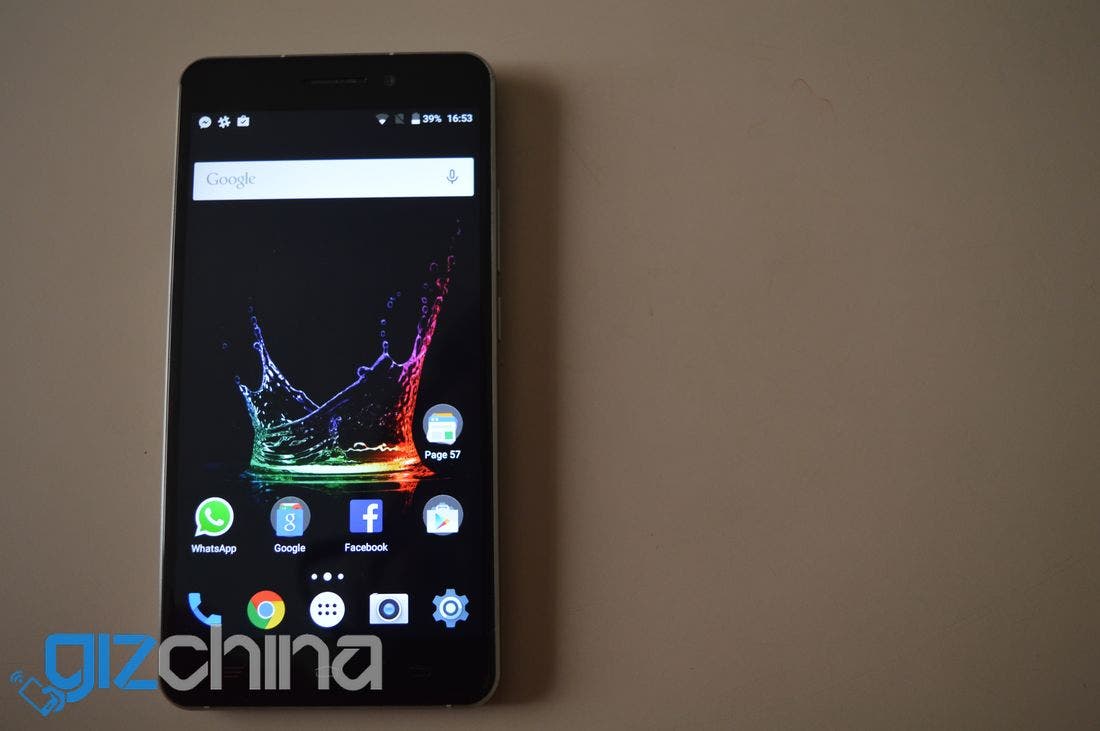 When I first received the Oukitel U8, its 5.5-inch 720p display looked sharp and crisp. It has stayed that way for the most part, but there’s an ugly little problem with the panel — the borders around the display are darker than the rest of the screen with certain colours. It’s a ~5mm band that fails to keep up with the rest of the screen. Funnily enough, the problem is sporadic; not only is it with only a certain number of colours, it also depends on what colors the screen produced prior to that as per my understanding.

Either way, it shows the lack of QC in the Oukitel facilities. Through time, I’ve also noticed a couple bright spots (3x3mm spots, not pixels) develop towards the bottom of the display. Certainly something that could and should’ve been avoided.

The rest of the display panel produces some really nice colours, it’s a shame that poor quality checks is making the phone suffer.

It also appears as though the panel is non-IPS. Almost every Chinese phone has an IPS display these days, and I almost took for granted that the U8 does too. But the poor-ish viewing angles made me re-check, and I was surprised to know that no listing of the phone mentions the display as IPS.

Another thing that you might want to make a note of is the fact that there’s no MiraVision support (yet) on the Android 5.1 ROM of the U8. Phones such as the Doogee Y100 Pro (same SoC, same Android version) do offer MiraVision support, so there is hope of MiraVision coming to the U8 in the coming weeks. 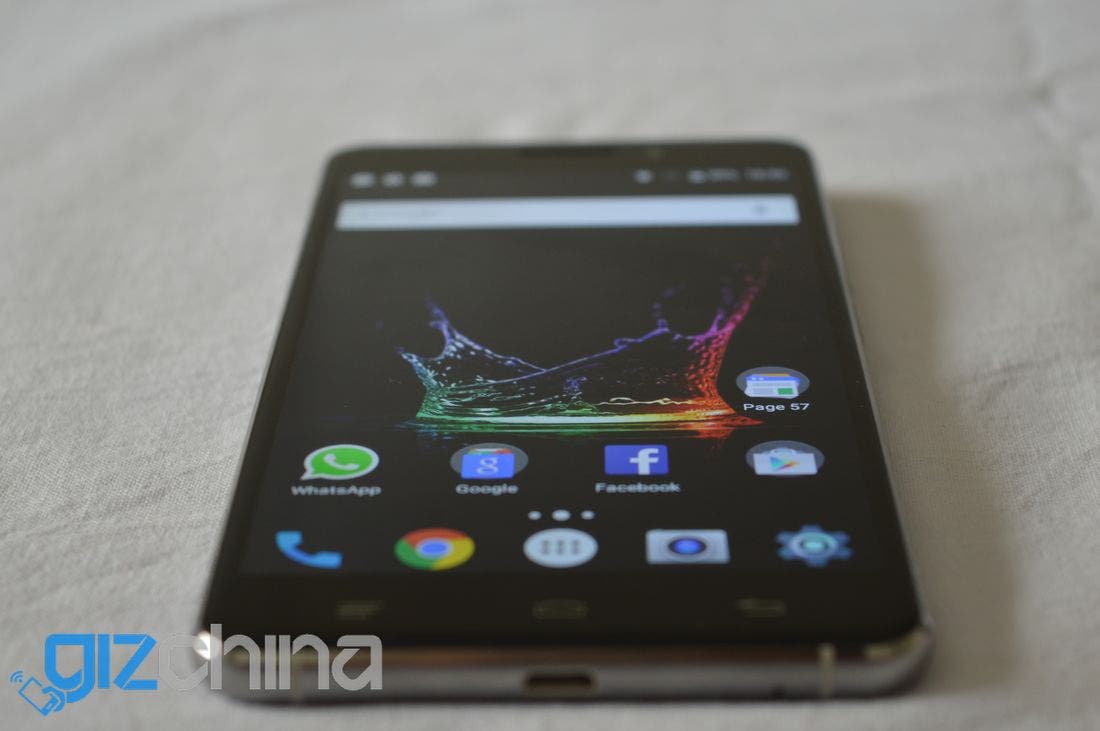 The phone comes with the MediaTek MT6735P as mentioned previously, which isn’t the most powerful SoC around. The chipset has quad-core CPU with a clock rate of up to 1.0GHz, which certainly sounds like a dive back in time. Thankfully though, the cores are efficient and do a better job than you would expect… but that doesn’t mean the performance is up to scratch.

Phones such as the Elephone P6000 (and a tonne others) that offer MT6732 are better off with performance. The Siswoo Cooper i7 which as the MT6752 is in fact about the same price as the U8. Quite clearly, Oukitel have made a trade-off for fingerprint security at the cost of performance.

The MT6735P is pretty poor at handling 3D, but 2D is much better. Anyway, if you will be buying the U8, it won’t be for the gaming performance it has on offer. If that is the case with you, you’re doing it wrong.

Moving on to ‘general’ performance, it is a lot better. There’s hardly any lags in the system, which looks like a very optimized Android 5.1 installation. Its funny to know that phones like the Xiaomi Mi 4 that run on the Snapdragon 801 are still stuck on Android KitKat whereas devices like the U8 feature Lollipop (5.10 out of the box).

2GB of RAM on the phone is something you will probably be happy to make do with. Productivity and utility apps run with no problem whatsoever, and are in fact usually pretty fast and snappy.

One thing you might want to note is that the U8 takes an unusually long time when installing apps sometimes. 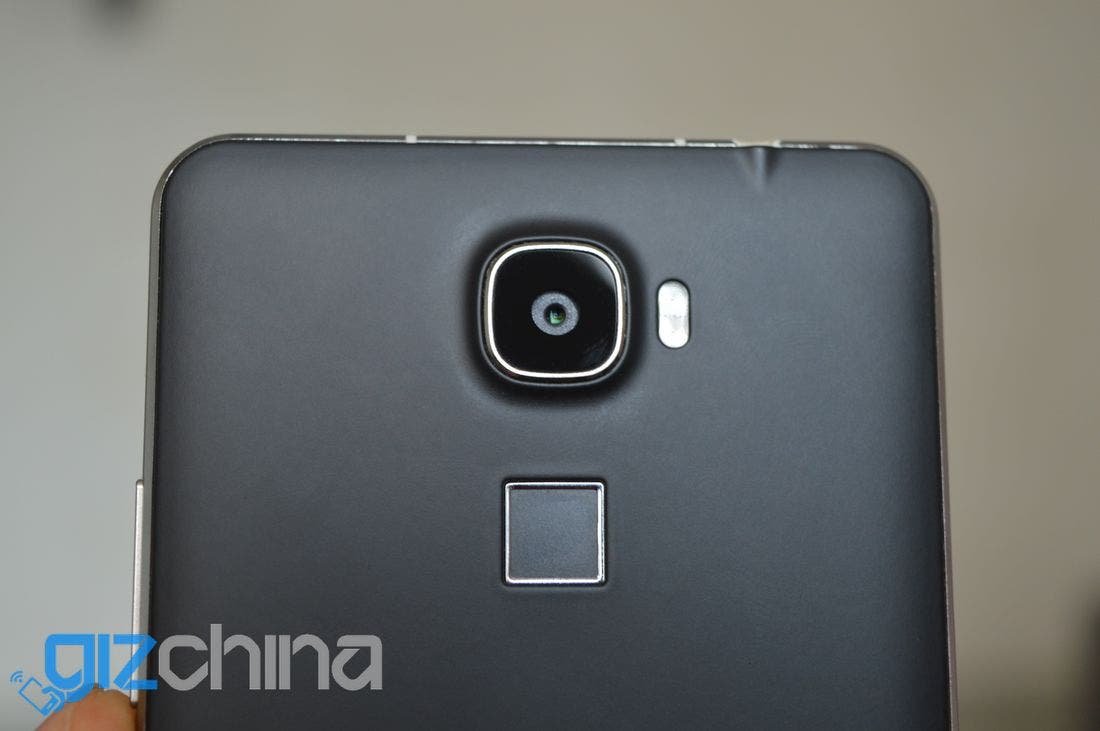 The U8 has a 13 mega-pixel camera on the rear. Unlike other phones, the U8 doesn’t claim to have an IMX214 sensor. There isn’t much to boast about the camera, to be very honest. At 100% zoom, the camera does show signs of interpolation, perhaps up from 8 mega-pixel to 13 via software.

The ROM also likes to have photos taken in beauty mode; which is why the settings almost always default to beauty mode. Most certainly a firmware bug, which the recent update did not fix.

It’s a decent camera that can take some nice photos in the daylight. Sharpness is better than other smartphone cameras in its range for the most part. Take a look at some sample images.

It seems as though the 2850mAh that is listed for the battery isn’t fake. The Oukite U8 has a great battery life, second (or equal to, sometimes) to the OnePlus One, which in my book has the best battery life among phones that don’t look like bricks.

I’ve constantly managed to get over 5 hours of screen on time from the 2850mAh battery, which speaks volumes about the efficiency of the device. Of course, the fact that the 1GHz quad-core CPU doesn’t take up a lot of power helps too.

In general the U8 is a solid phone as far as battery life is concerned, however, when the level reaches 15% it’s a different story. There are phones that discharge quickly, but the U8 falls from 15%-0% at an alarmingly fast rate. You will literally see the counter going from 15-0% in a matter of a couple of minutes. Oukitel NEED to fix this ASAP.

For voice calls and such, the Oukitel U8 proves to be an excellent device with a clear output and good range most of the time. WiFi reception is pretty good too (better than some other phones in the price range) but not the best.

GPS is quite strong, and after a lock outdoors I was able to get the phone find a 3D fix indoors. 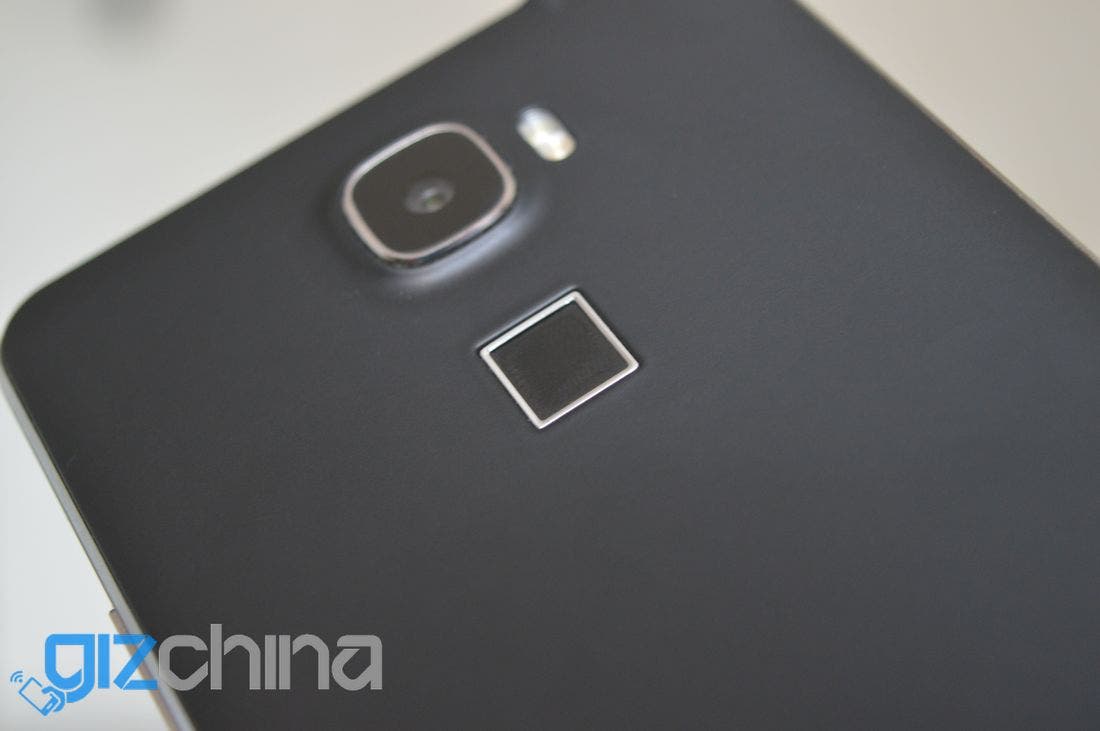 The U8’s USP clearly is the fingerprint sensor, which is good hardware. I can say that with confidence because before the latest OTA (as of 7/23/15), the fingerprint sensor was near flawless with great accuracy, albeit with a slow-ish speed.The update however killed the fingerprint sensor, and I’ve nearly stopped using it. Another thing to note is that the sensor will every now and then wake the phone without you having touched the scanner region. This shows that the hardware isn’t able enough to differentiate between skin and other materials.

The U8 comes with a fairly untouched installation of Android 5.1 Lollipop. The MT6735 chip powers a lot of phones these days, and almost all of them seem to be running Android 5.1. On the U8, it is pretty flawless. The fact that the factory hasn’t done much to the ROM helps the case here.

One thing you will probably not like too much is the fact that the leftmost capacitive button on the U8 is still for accessing in app menus and not recent apps. Of course you can root and install Xposed and modify and such, but the factory ROM should do that in the first place.

Other than that, there’s a little manual tweaks added, none of them cosmetic. This includes gestures, which you’re suggested to keep off if you keep your phone in your pocket because the phone doesn’t differentiate well between human skin and jeans. 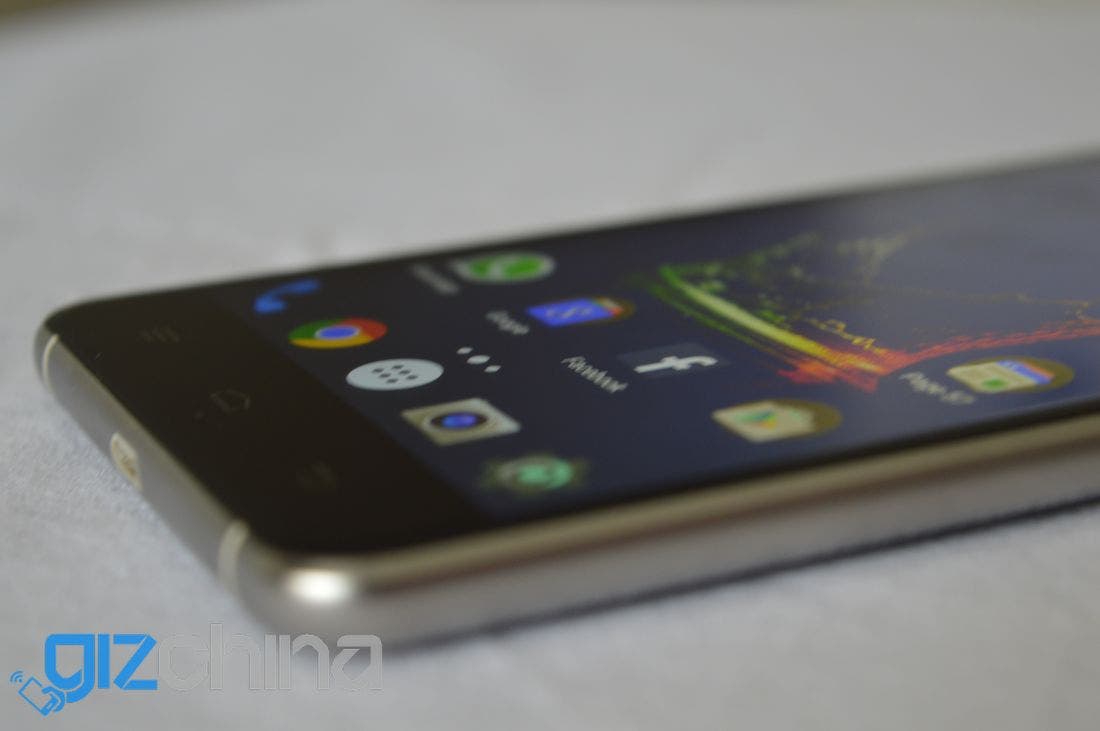 The Oukitel U8 is a decent device with OK performance. What is good about the phone is that it doesn’t try to do a lot of things like some other phones. It does feel really good out of the box, but the heft can later start becoming a problem. Also, at 5.5 inches and not the slimmest bezels, the phone isn’t the smallest device you’ll have in the house… so that’s one place you’ll have to make do with what’s given to you.

Since the fingerprint scanner was near flawless before the software update, it shows there is room for improvement. I’m hoping Oukitel eke out another update that brings the accuracy from the original firmware and speed from the update together.

Thanks to CooliCool.com for providing the Oukitel U8 for review.