Xiaomi seems unfazed by the tonne of phone launches that have taken place at the IFA. The Chinese phonemaker seems to be a little too engrossed in the preparations of the launch of the Mi 5 for that!

Leaked earlier today is what is believed to be a teaser for the next big thing from Xiaomi. The Mi 4 is still a very good phone, but with the amount of competition coming from all around the world, combined with the fact that Xiaomi are looking at the global stage now, means that the Mi 5 needs to be out soon.

The alleged leaker teaser comes via the now-prolific Chinese leakster @KJuma. Take a look at the picture in question below. 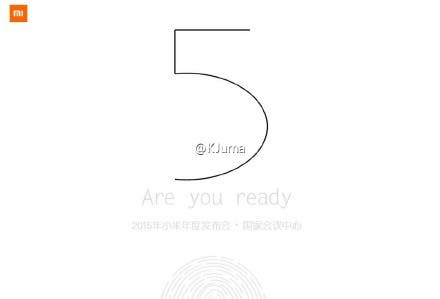 Earlier today, alleged leaks of the Snapdragon 820 showed up where the SoC scores over 83,000 points on popular benchmarking app, AnTuTu. Xiaomi has likely been waiting for the SoC to be made available so they can proceed with making the Mi 5, but word is that the Chinese company has had enough waiting and has made up its mind to use the already available Snapdragon 810 instead.

Since there’s already the Mi Note series taking care of larger phones, the Mi 5 is expected to be well under the 5.5-inch mark (possibly 5.2″) with a Quad HD display, 16 mega-pixel camera and more.

Keep an eye on this space, we’ll be reporting more news around the Mi 5 as it comes.