LeTV are the next big name to have a launch in October, with the release of the LeTV X500 scheduled for 27th October.

Starting on the 15th of this month ZTE will begin the launch party with the release of the ZTE Nubia X8 smartphone, a phone with bezel less display and side fingerprint scanner. Xiaomi are next with a mystery device launch (poss the Mi Pad 2) on the 19th October. Then it is the turn of Meizu on the 21st with a metal version of the Meizu M2 note, and then on the 27th it is the turn of LeTV.

LeTV have confirmed that they will have a launch in Beijing on the 27th. The event will be for a phone possible named the Le 2, which sounds like the replacement for the very popular Le 1.

Antutu benchmarks for the Le TV X500 (the codename for the Le 2) tell us that the device will have a 5.5-inch 1920 x 1080 display, 13 mega-pixel rear camera, 5 mega-pixel front, 3GB RAM, 32GB memory and a Mediatek Helio X10 chipset. If those specs sound similar it is because they are the same as the Le 1, so what differences will there be? 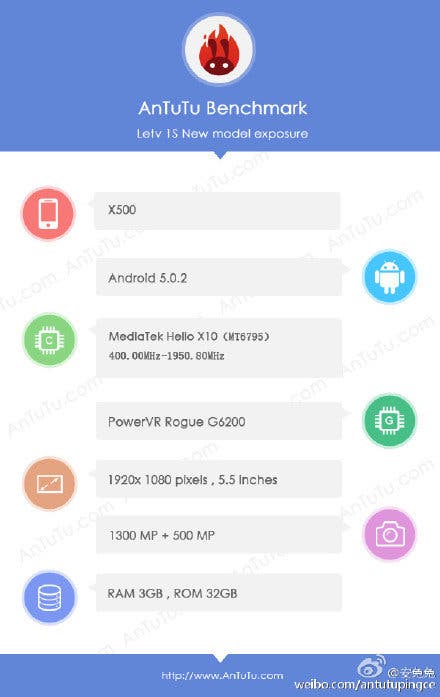 We believe that this is going to be a phone with all new material and build. As this is named the X500 and the current Le 1 is the X600 we might assume that a unibody plastic design could be used to keep the cost of the phone down to around 999 Yuan. Then again as it is the Le 2 , couldn’t it be an all new unibody alloy phone with PDAF and fingerprint scanner?

Was do you think the LeTV Le 2 launch will have in store for us?