Xiaomi revealed the long-rumored Xiaomi Mi Notebook Air yesterday amid fanfare and hype. Naturally, there are things that you tend to miss with all the excitement going around… and thus, here are 10 things, you might or might not know, about the newly announced Xiaomi laptop.

1. This is the first ever Xiaomi laptop PC. 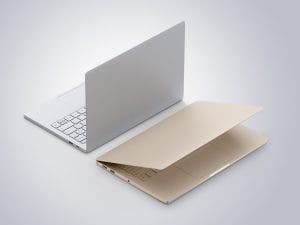 Agreed they already released devices with Windows 10 in the past (mobile), like the Mi Pad 2, the Xiaomi Mi Notebook Air is first real fully-capable Windows machine from Xiaomi. And it comes with the specs of one as well, from the Intel Core i5-6200 and Nvidia Geforce 940MX to the 8Gb of DDR4 RAM and 256GB SSD.

Xiaomi decided to come in with a bang, going against (or at least trying to) the laptop’s market giant Apple Macbook Air, along with a great design and materials choice. All of this at almost half the price! 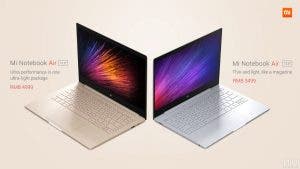 Maybe you got so excited that you didn’t notice, but the Xiaomi Mi Notebook Air comes in two different screen sizes and relative specs.

3. The Xiaomi Mi Notebook Air will have a backlit keyboard. 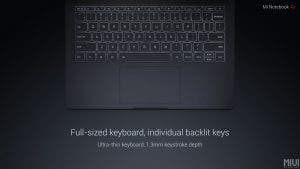 If you use your laptop at night or in the dark, you sure will appreciate this feature. The Xiaomi Mi Notebook Air sports a full-sized keyboard with individually backlit keys. The ultra-thin keyboard also has a merely 1.3mm keystroke depth.

4. …and a laminated Full HD display. 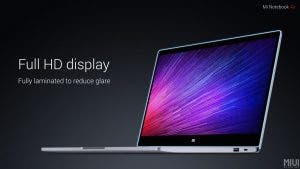 The Xiaomi Mi Notebook Air comes with a fully laminated 1920 x 1080p display to drastically reduce glare against sunlight or any other source of light. An important factor if you’re used to bring your laptop wherever you go.

5. You can swap the SSD and/or add another one on the Mi Notebook Air. 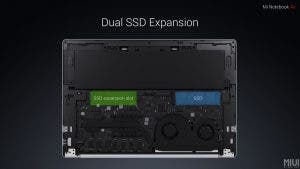 One of the best features which separates the Mi Notebook Air from the competition (looking at you Apple), is the fact that the Xiaomi laptop lets you swap your SSD. But here comes the best part, you can also add an additional M.2 SSD and thus have even more storage! 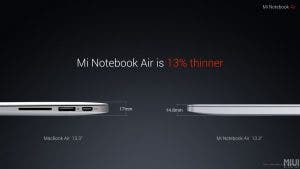 As we’re comparing this to the MacBook Air throughout this article, not our fault though, they called it “Air”. You might like to know that the Xiaomi Mi Notebook Air has an 11% smaller body compared to the MacBook Air at the same 13.3″ screen size.

This makes it ideal for people who really value portability.

7. The Mi Notebook Air unlocks with a Mi Band 2. 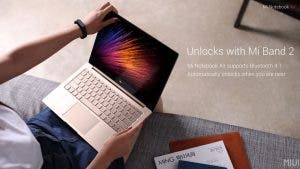 Xiaomi decided to add a little perk with this laptop, it in fact, will unlock automatically if you’re to its proximity while wearing your Mi Band 2.

It works through Bluetooth 4.1, and it will probably give you an option on how close you need to get, before it unlocks your laptop.

8. And has edge-to-Edge glass protection. 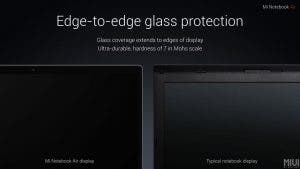 The Mi Notebook Air has a glass coverage which extends to the edges of the display. It’s made of ultra-durable glass, rated with a hardness of 7 in Mohs scale. In few words, it’s supposed to be fairly scratch resistant. 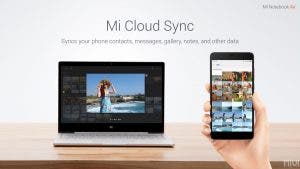 Just like Apple, Microsoft and Google, also Xiaomi added their “sync everything” software portion. You can indeed sync your phone contacts, messages, gallery, notes and other data through WiFi (or mobile data).

This issimilarly to what happens with Apple’s Continuity or Microsoft and Google’s cloud services.

10. And of course, Pricing & Availability: 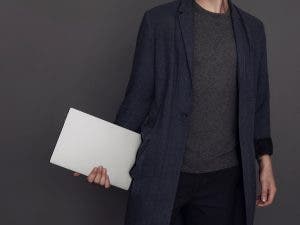 We still haven’t heard about their global release, what we know for certain is that it will launch in China August 2nd, and it’ll probably be available from online Chinese retailers soon after.

So what are your thoughts? Will Xiaomi shake up the laptop marketplace as they did in the smartphone industry?

Next Video comparison of Cubot V1 and Xiaomi Mi Band 2

10 Best Smartphones That You Can Buy In Singapore In 2022