The Xiaomi Mi Notebook Air 12 (shortened to the Xiaomi Air 12) is Xiaomi’s first shot at an ultrabook and they almost hit the bull’s-eye. There is no shortage of Core M Ultrabooks or convertibles out there, with two notable examples being the incredibly popular 12” MacBook or the considerably less popular Surface Pro 4. Both utilize the same Core M 6y30 processor found in the Xiaomi Air 12 but differ in other areas.

However, both of those devices cost well over $1000 which is priced right out of the burgeoning market for affordable ultrabooks.

Enter the ASUS UX305. Wait what? Isn’t this review about the Air 12? Yes it is, but even though the Xiaomi Air 12 is clearly aimed at Apple’s 12” MacBook, its stiffest competition comes not from the $1300 MacBook, but from the $650 ASUS Ultrabook.

Starting at $500, the Xiaomi Air 12 boasts possibly the lowest MSRP price for an Ultrabook utilizing the Core M 6y30 processor. However, reseller prices rise up to around $580-600USD, making this much less of a deal. However, the Xiaomi Air 12 will go on sale during the November 11th event in China, bringing the price down much, much closer to the MSRP price in China.

Xiaomi swung for the fences and almost hit a home run, hampered a little by a couple of things. Is this laptop worth your money? Read on to find out why this laptop is almost perfect.

Big thanks to Gearbest for providing this review unit. I used the Xiaomi Air 12 Ultrabook with an unactivated version of English Windows 10. 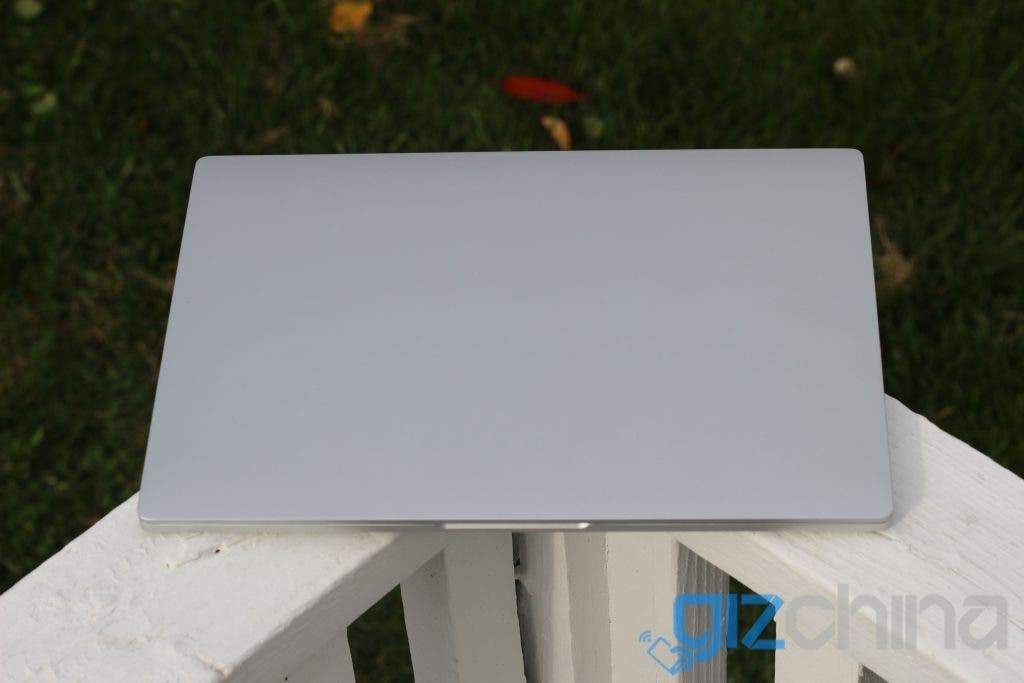 Flashy, LED lit gaming laptops are definitely not my jam. I prefer spartan, industrial, and sleek designs in my laptops, but the Xiaomi Air 12 seems to follow that mantra a little too much. The lack of the logo really draws the wrong kind of attention to the laptop, making people take notice of this logoless device.

It really does resemble factory OEM laptops that are shown off at trade shows, ready for any brand to purchase a huge number of them and slap their own logo on said device. 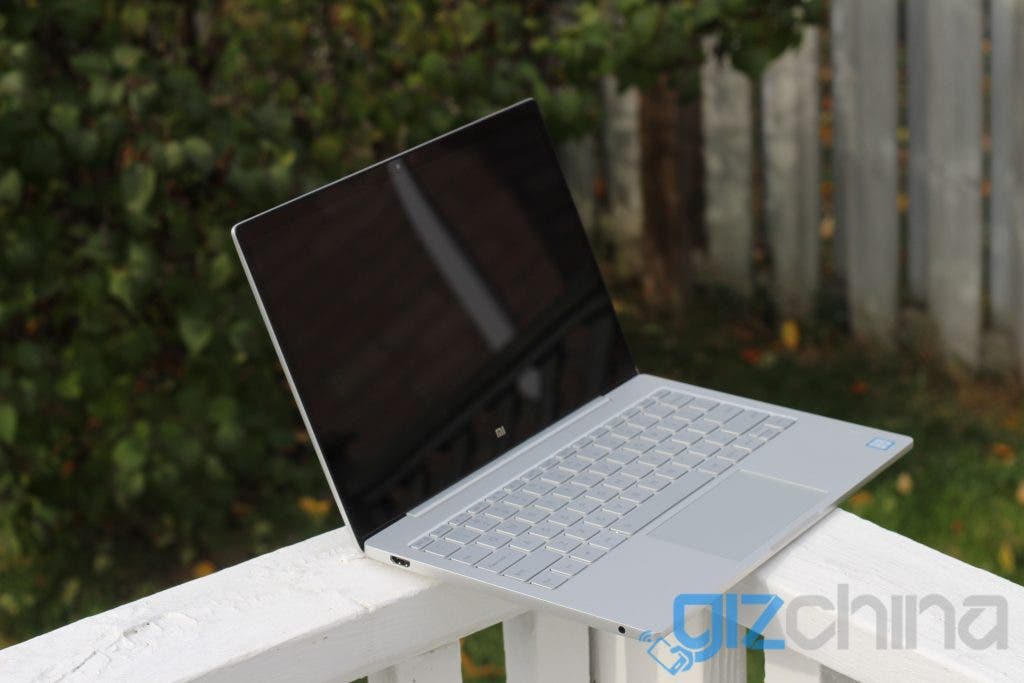 It’s incredibly portable, measuring about 12mm longer than the 12” MacBook and a tad weightier because of the slightly larger screen. Even though the laptop is technically thinner than the MacBook at its thickest point, it feels bigger because it does not taper the same way the MacBook does, keeping the same thickness throughout.

It’s made out of brushed aluminum and in terms of build quality, it challenges the best of the best with ease. You can open the lid with one hand and it opens to around 120 degrees, which is pretty limiting if confined in a small area like a plane.

Once open, the 12.5” screen and bezels can be seen. The bezels around the screen are small, not XPS13 infinity edge small, but MacBook small with the bottom bezel significantly larger than the side ones. The keyboard is backlit individually and the keys themselves have really good travel since the body doesn’t taper but the keys are a tad on the mushy side.

It doesn’t have the crisp feedback I’m used to on a desktop keyboard but is more akin to the XPS13. However, it’s a much better typing experience compared to the 12” MacBook though because there’s actual key travel. There is a certain attention to detail here, as the power button requires significantly more force to depress than the other keys. 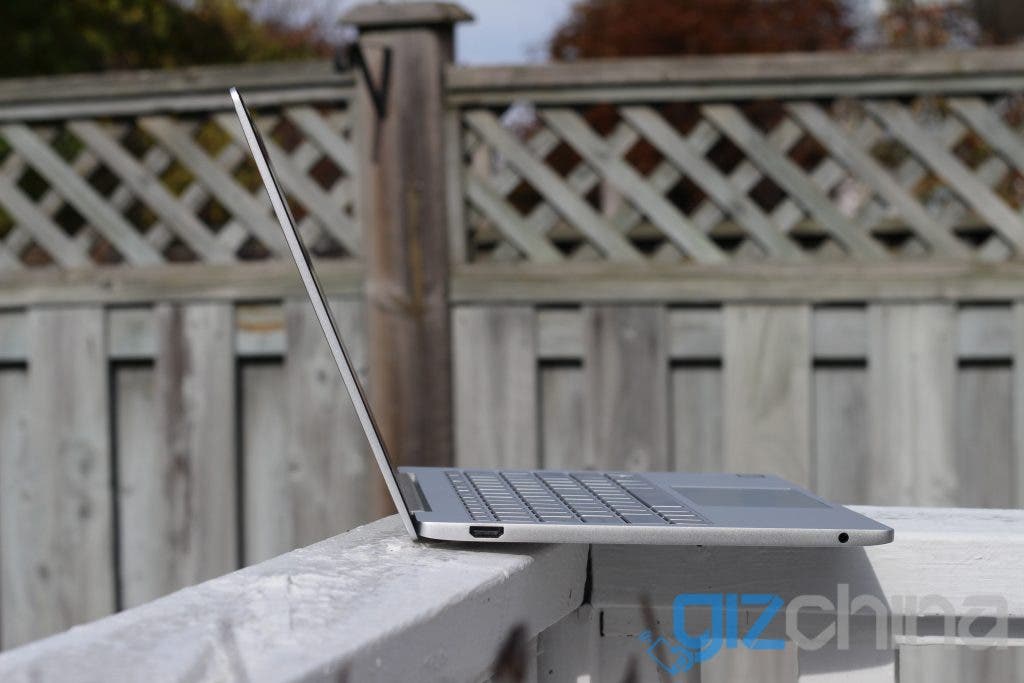 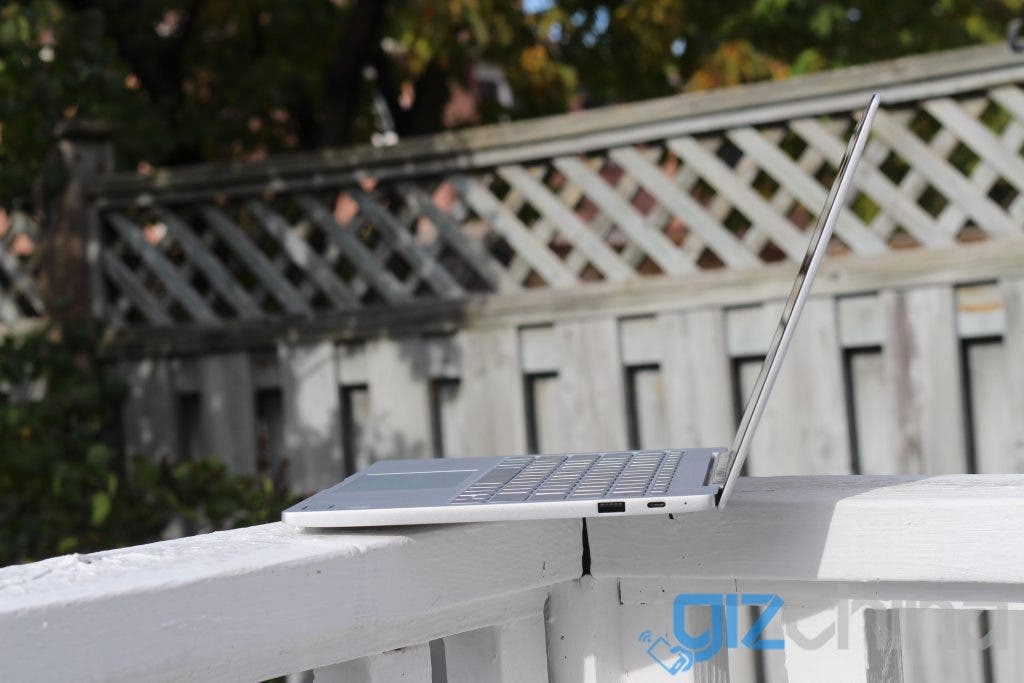 You find a full size HDMI port and headphone jack on one side and a full size USB 3.0 port as well as a USB-C port that is capable of charging, data transfer, and display output. The Notebook Air exhibits excellent build quality in a compact and portable body, but the lack of aesthetic does make this laptop look plain. 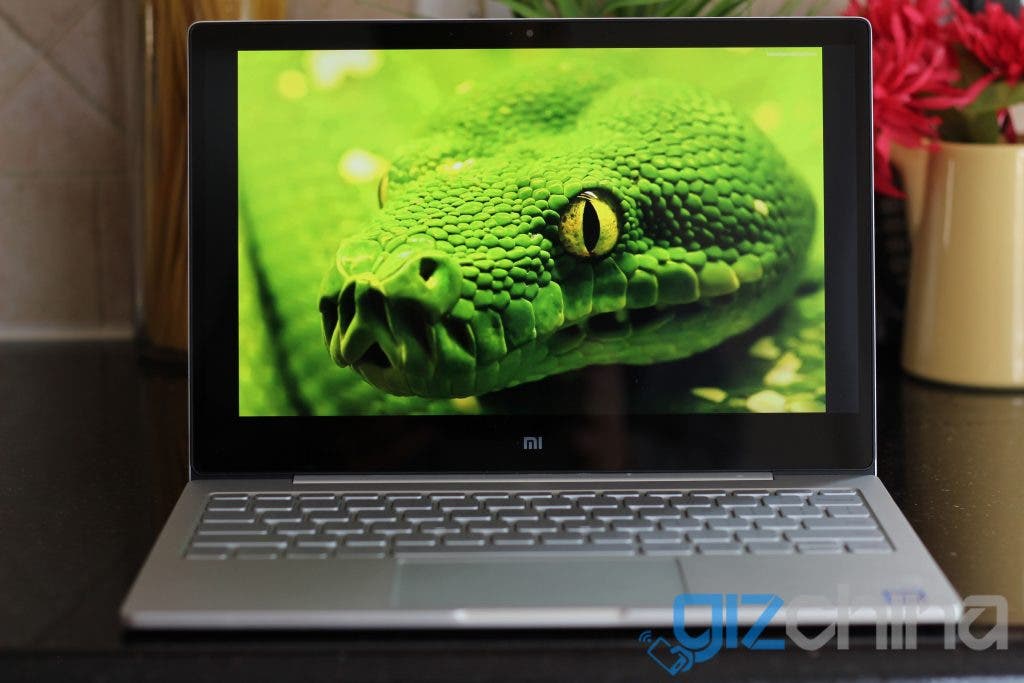 Laptop screens are broaching the 2K resolution barrier more and more, with many laptops coming with 2K display options like the ASUS UX305 and the XPS 13. Others like the 12” MacBook and the Yoga 2 Pro come with a high resolution screen as a default.

However, we have a rather standard 1080p IPS display that recreates colours quite nicely. 1080p is still fairly sharp for a 12.5” display that is used farther than 30cm (12”) away, and should help with the battery life. It goes to a maximum of 300cd/m2 which isn’t quite bright enough for use in direct sunlight, but it is bright enough to fight through indirect light. 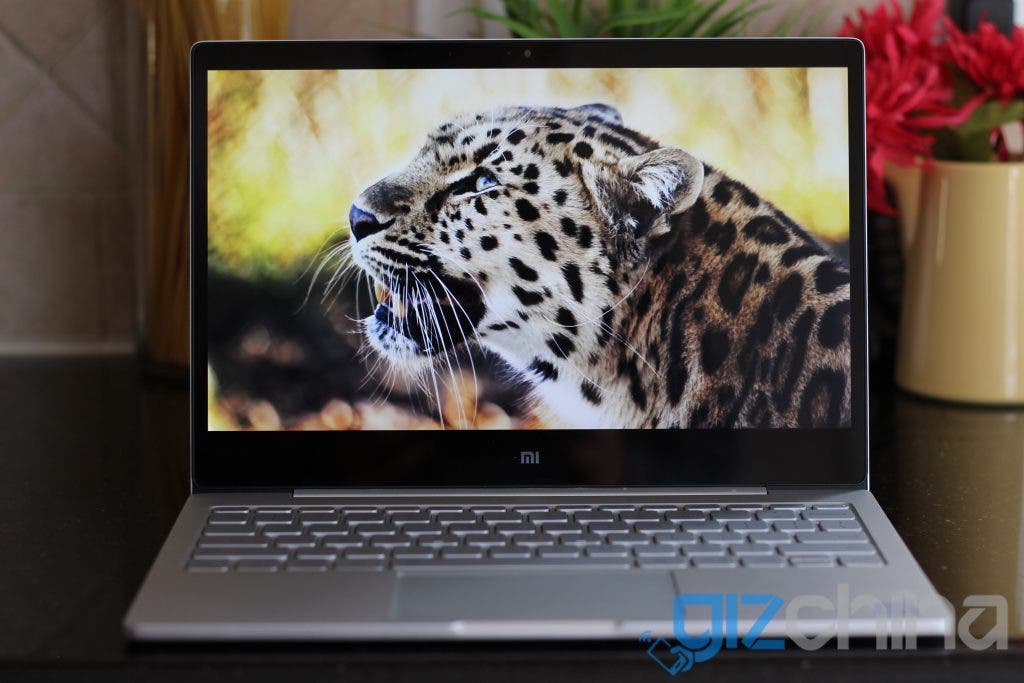 It is annoyingly reflective even though there is a laminated screen, so you do get reflections in certain situations. When you close the lid of the notebook, there is a tiny gap between the screen and the keyboard so it won’t get scratched either. 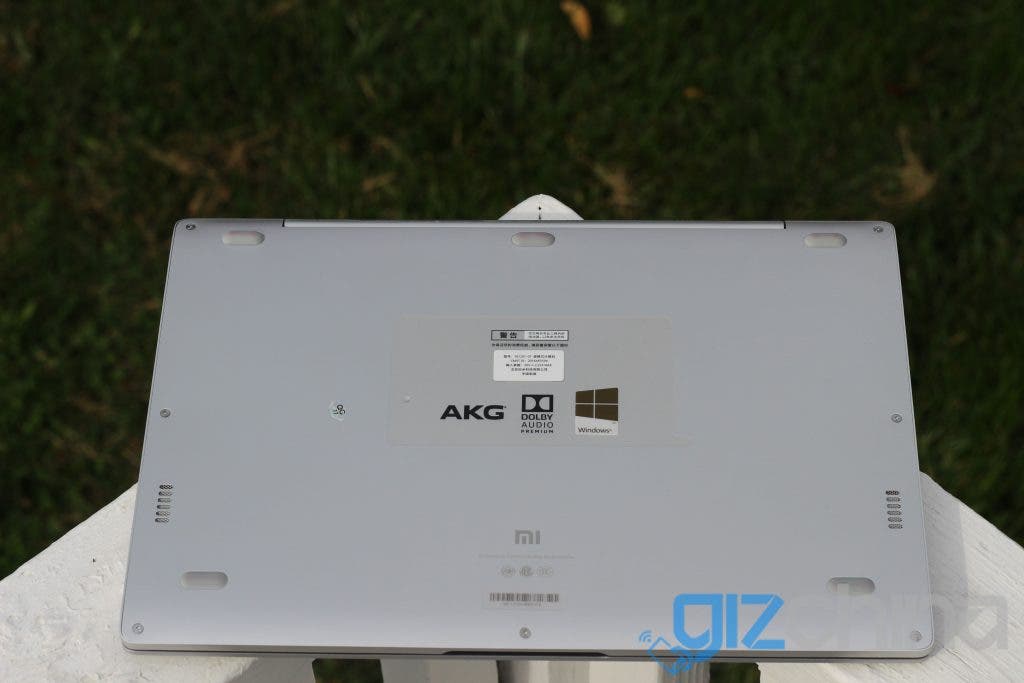 The two downward firing AKG speakers produce some very decent volume that is no doubt aided by the rubber feet elevating the laptop above the surface, but place it on a bed and audio gets significantly muffled. The quality of the audio is very impressive as well, lots of bass, clear mids and highs as well.

Battery life for me is make or break in smartphones which does make sense since its with me all the time. Battery life is still extremely important in notebooks, but because I’m usually not using it 24/7, I’m a little bit easier on it.

That being said, the battery life here is not great at all. It gets around 6-7 hours of screen on time throughout the day consisting mostly of web browsing, some YouTube and typing out some blog posts and Word documents. Compare that to the XPS13 and the MacBook, both of those last almost twice as long as the Xiaomi Air 12 does.

I did the web browsing test and it died after 6.5 hours while I could play back video for almost 8 hours. Charging is surprisingly fast, I could charge it about 50% in 40 minutes and 100% in about one and a half hours.

One minor thing is that the charging cable colour is a very dirty white. I tried cleaning it off but it looks like that’s the colour of the cable, I guess to better hide any dirt that would get on the cable when on the lfoor. Battery life could definitely be better on this device, and only light and medium users can get through a day without charging.

Software is the biggest issue here. Because this device is intended for users in China, it comes with one of two Windows 10 options; first, is a single-language Chinese Windows 10 installation and the second, an unactivated version of English Windows.

Unfortunately, you cannot reuse the Chinese Windows 10 key in a fresh install of English Windows 10 as they are not compatible.

There are two solutions here. Either you purchase a license key for Windows or you learn Chinese. This is a huge disadvantage as it adds an extra $100 to the price of the laptop, effectively rendering it a cold deal. Unless you’re willing to follow the ways of seafaring rogues, you’re out of luck. That being said, unactivated Windows 10 doesn’t actually disable much functionality, just integration with your Microsoft account.

Apart from the OS issues, the Core M 6y30 performs well. Its aim is to offer splendid day to day performance similar to that of say, a Core i5 and it succeeds in that regard. I didn’t see lag at all until I started some intense multitasking which included 12 tabs open in Chrome (including the Verge’s incredibly heavy front page), a document open and a video playing in the background. 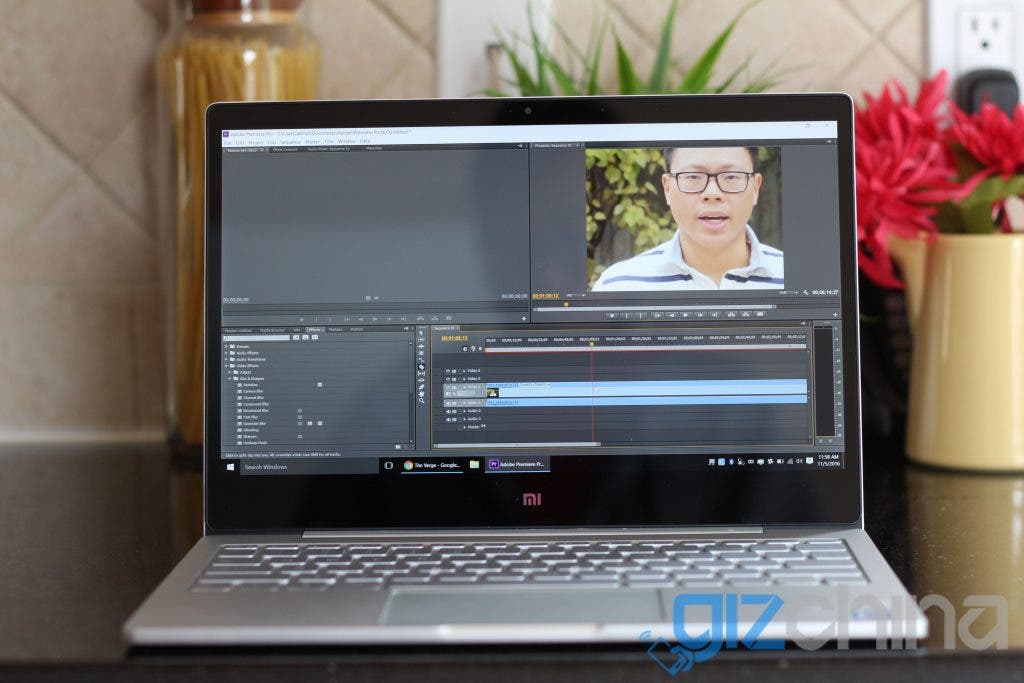 The 6y30 is also more than adequate for some light Photoshop and Premiere, I actually produced the entire GizChina review video on this laptop and I didn’t see much lag during editing. However, encoding the video took almost 5 times as long as my desktop, which took about 2.5 hours. 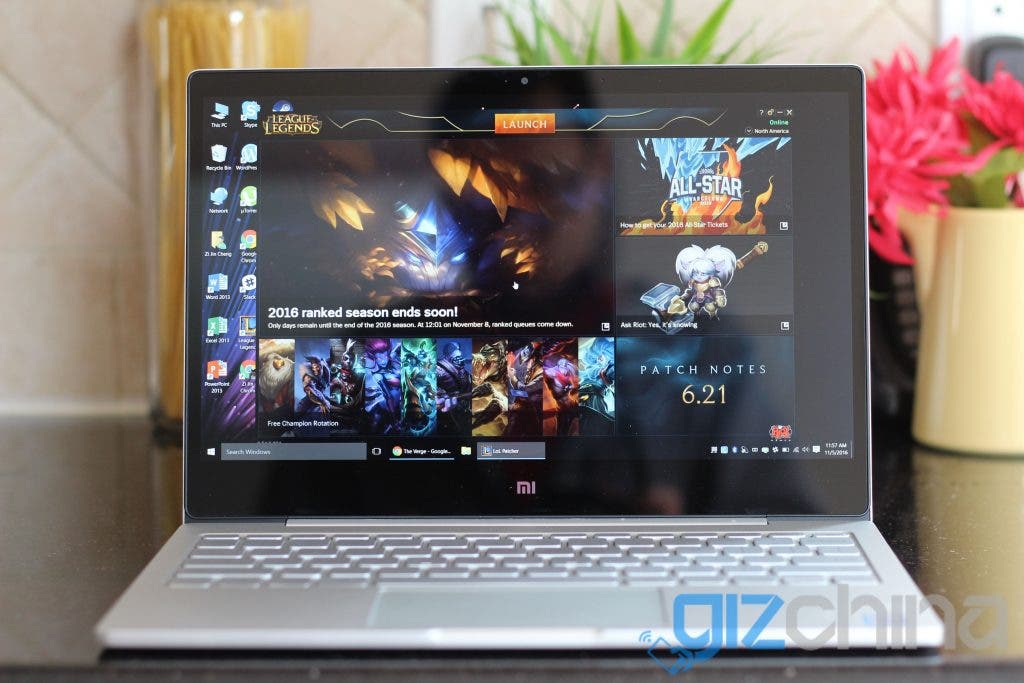 Yes you can game, but you’ll be stuck with mostly light gaming such as Call of Duty: Modern Warfare 3 or League of Legends. As long as you’re willing to bump things down to low settings, you can get some decent framerates.

The 128GB SSD is spacious or anemic depending on how you look at it, and after installing three games and Premiere, its definitely on the anemic side. It is quite fast (it is an M.2 SSD after all) and there is a second M2 slot for another SSD if you so desire.

This laptop doesn’t score very high in the connectivity area. There is a lone USB 3.0 port for regular connectivity and a USB-C port for data and charging as well. I had hoped for at least 2 full size USB ports since there is no taper in the body preventing another one from being slotted in, but no luck here. There is a full size HDMI port which does work when I plug it into the TV. It also works when plugging it into an HDMI to VGA adapter. Question for Gizchina readers, why are VGA/HDMI adapters so expensive? It should cost $5 at most.

The biggest issue I have with the laptop is the lack of an SD card slot, as that is something that I would have thought was standard in every laptop.

The two biggest issues (or one and a half) I see are:

Apart from these, the Xiaomi Air 12 is a solid Ultrabook. It has a good build quality, very decent performance, and a pleasing screen and speaker.

However, there’s nothing extraordinary about it as Core M devices are a dime a dozen. The Xiaomi Air 12 enters a crowded market with no real standout specifications except for the price. The after tax and shipping price of $580 is not that great a deal in the North American market.

Why? The fault lies with the frequent sale prices on many notebooks. The ASUS UX305CA can be had for $599USD before tax, and a myriad of non Ultrabooks (think large, heavy, battery hogs) with Core i5 processors are regularly priced at $400 and below on sale.

However, if you place both laptops side by side the UX305 looks quite ugly and dated beside the Xiaomi Air 12 due to its large bezels. Those of you with tight budgets probably don’t care too much about aesthetic anyway.

All that said, this is going to become my daily driver going forward, and I enjoyed my time with the Xiaomi Air 12 immensely. Portability is key, and this ultrabook excels in that regard.

“a great first laptop for xiaomi”

Next MGCOOL all set to launch their first smart band!