A new leaked photo claims to show the Meizu Pro 7, or could it just be another device?

Following on from renders yesterday that claimed to give details of a Meizu Pro 7 device, we have a photo that tipsters are suggesting could actually be a real image of the phone. We’re not convinced.

Yesterday’s rumours told of a Meizu Pro 7 phone with similar design to the Pro 6, but with updated Mediatek chipset and impressive (but rather pointless) 4K display.

This new photo claims that the Meizu Pro 7 will actually come with a 5.62-inch 2K display which sounds a lot more realistic, but we’re still not sure that the photo is genuine.

The spy shot shows a smartphone with curved display and oval home button, but in all honesty, this could be a photo of the current top of the range Vivo smartphone, or even an upcoming Samsung device.

In fact, we believe this is actually a Vivo (judging by the UI) which a very badly photoshopped ‘Edge’ UI feature layered over the left side of the display. 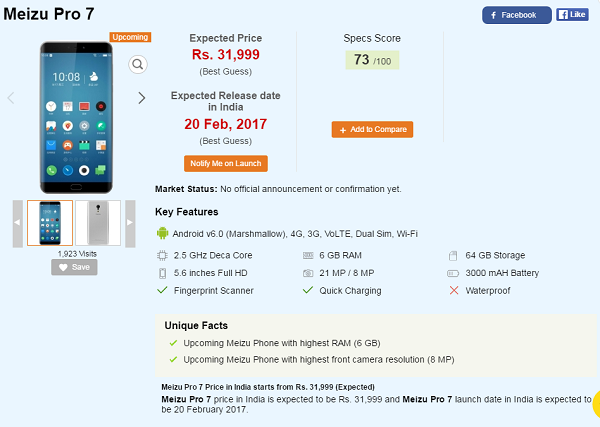 Moving on for the photo we have a listing for an Indian phone retailer who claim to know the specs for the Meizu Pro 7 (see below) along with the launch date.

What do you think of these details? Could any of them be true?

Next Doogee Y6 Piano Black or the similar iPhone 7 Plus Jet Black?