Things are going great for Xiaomi in the smart band market, especially after the latest IDC report that clearly states that the Chinese company has climbed to the second place in the world, behind Fitbit. 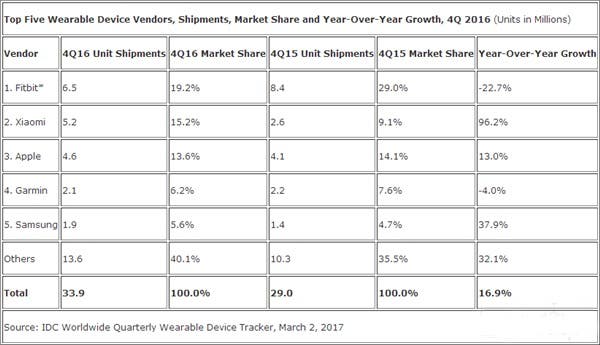 More specifically, the IDC report states that the total shipments of smart bands have reached 33.9 million in 2016, Q4, a 16.9% increase when compared to last year (same period). Fitbit is still in the lead with 6.5 million units sold during that time – albeit they face a significant decrease in shipments when compared to Q4, 2015 by 22,7%!

Xiaomi managed to double its year to year sales with 5.2 million units shipped and they have Xiaomi Mi Band 2 to thank for it, a device that has become a best seller in just a few week’s time! Apple sits comfortably in 3rd place with 4.6 units sold and a steady growth of 13%, Garmin is 4th with 2.1 million units and Samsung fifth with just 1.9 million smart bands sold during the same period of time.