Meizu is still coping with last year’s dire financial results, but this doesn’t mean they have stopped their plans to… confront Xiaomi in the Chinese market. According to a recent Weibo post by the company’s Vice President (Li Nan), they are working in full steam to launch not one- but two smartphones in the coming months, with impressive specs. 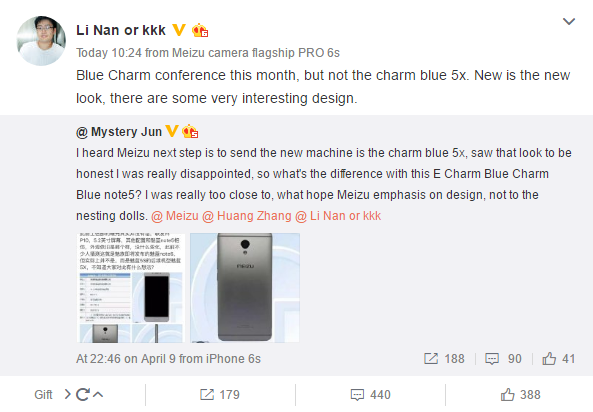 One of them is the purported Meizu M5X which has been recently certified by TENAA, and the other is the Meizu Pro 7, the most awaited flagship of the Chinese company, scheduled to become the direct competitor to Xiaomi’s Mi 6 model. Obviously Li Nan didn’t mention the name of the expected device, but rumors insist that it will be called this way. After all only the Pro lineup of Meizu models has the potential to directly take on the Xiaomi flagships, so it’s only logical to expect this model to be unveiled soon.

According to rumors, the Meizu Pro 7 flagship is expected to pack Mediatek’s Helio X30 SoC along with a rear camera with 12MP Sony IMX362 CMOS sensor and a 5.7-inch 4K display with 3840 x 2160 pixels resolution.

Are these specs enough to compete with the Mi 6/Mi 6 Plus flagships? Only time will tell…