Will the real Snapdragon 625 lovers please stand up? Technically I would have stood up, but not for the Mi Max 2. That’s not to say the Snapdragon 625 is not a good SoC, but Xiaomi set our expectations way too high with the Mi Max 1 so anything less seems like a disappointment (Opinion Piece here). 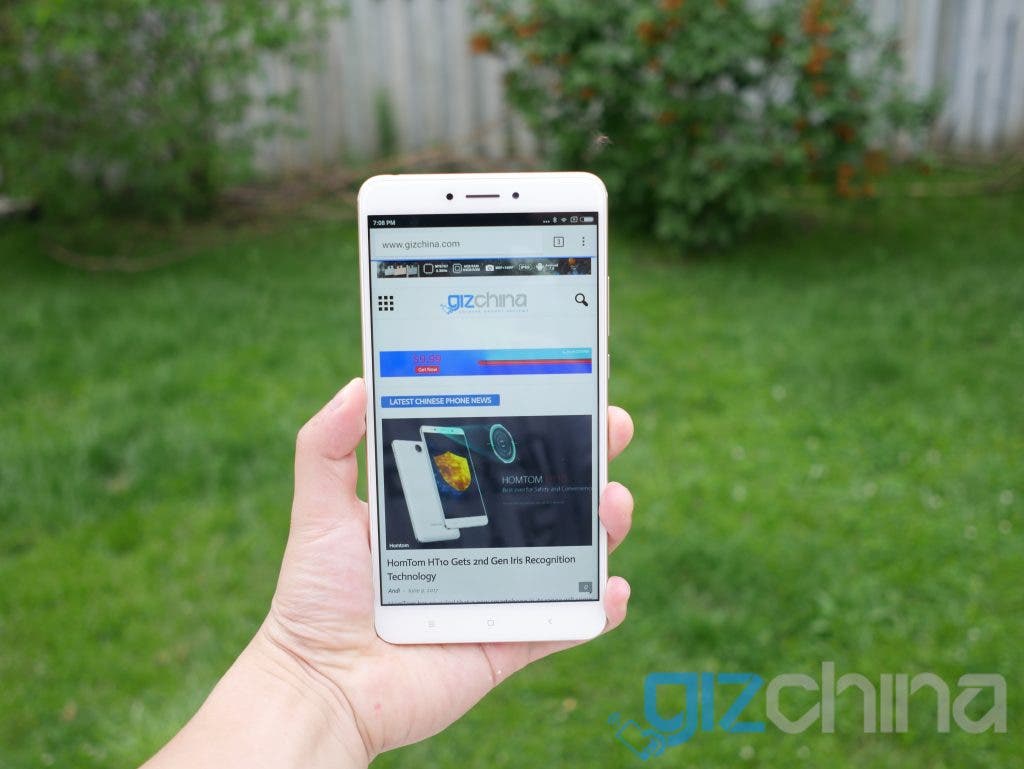 Apart from the massive screen, the crowning feature for the Mi Max 2 is definitely the 5300mAh battery. Even as a battery fanatic, I did not look forward to testing the battery in this phone as it would probably take forever, and it did. There is also a potent and secret weapon this unassuming Mi Max 2 holds, which could be the extra bit needed to fight in this crowded smartphone market.

The largest SD625 phone from Xiaomi 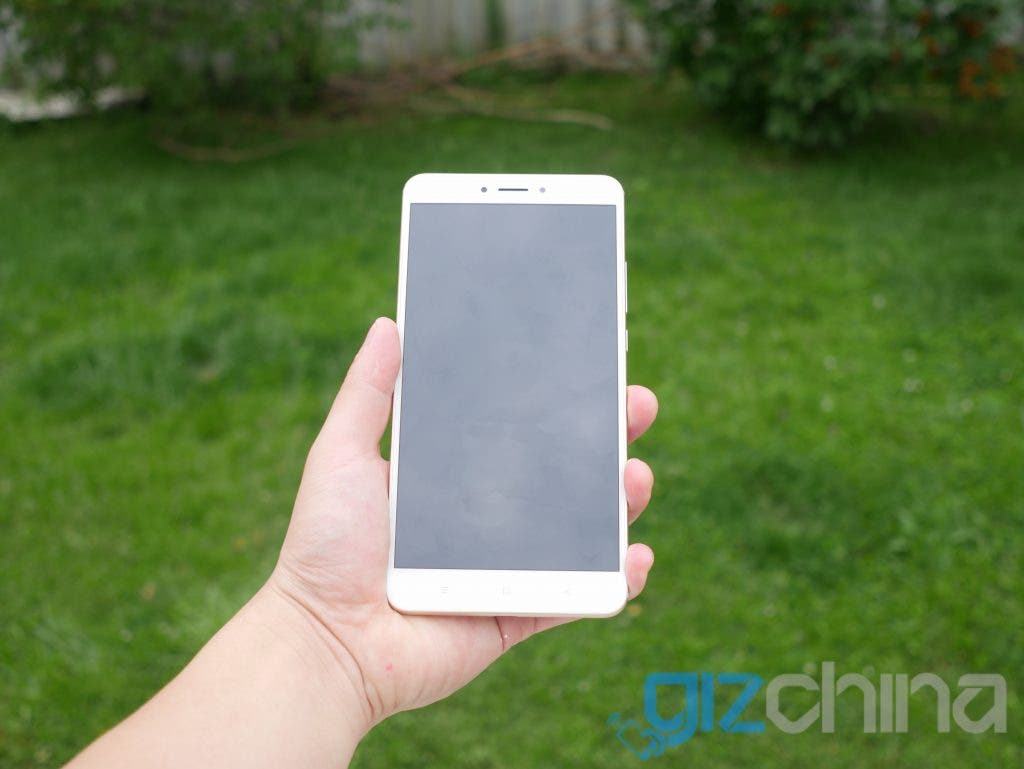 The excellent build we see on the Mi Max 2 is what we’ve come to expect on Xiaomi’s higher end phones. The metal unibody is very well finished and while it lacks that extra polish an HTC phone would otherwise have, none but the most nitpicky will have issues with the quality of the body. 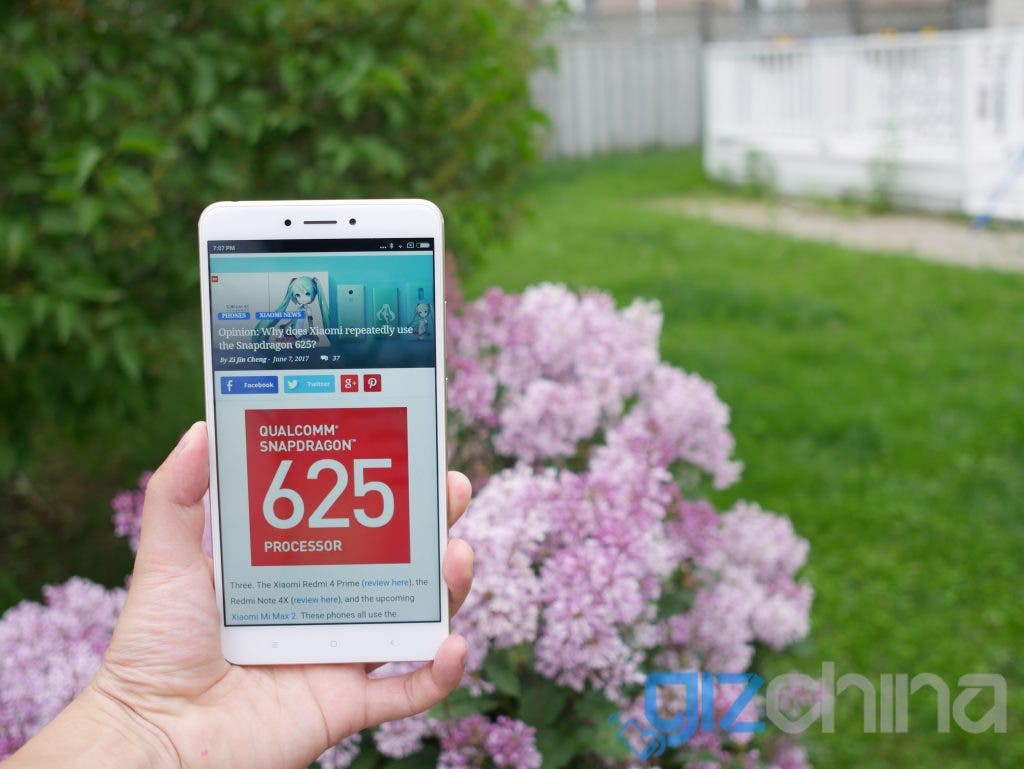 Apart from the premium build, this phone is obviously massive, with a 6.44” screen. The amount of bezels don’t seem to be lessened from the previous Mi Max, as there are significant but not overly large bezels surrounding the screen. What irks me the most is the prominent black bar surrounding the screen; it’s plenty visible when the front of the phone is white, and is less and less acceptable as the starting price for this phone is so high. 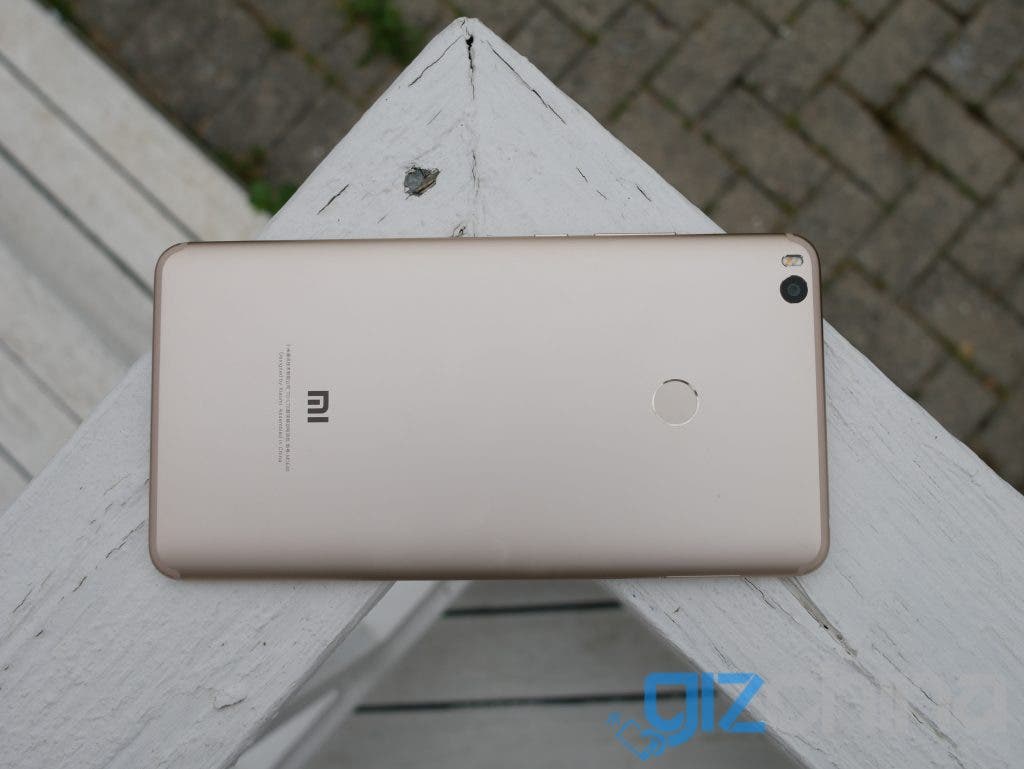 The Mi Max 2 is an entirely two handed affair with little to no opportunity to (safely) use the phone with one hand. The rear mounted fingerprint sensor is definitely a reach for me as well, so unlocking it through the sensor is a bit of a chore at times.
The Mi Max 2 is well built, very large, but also rather nondescript. 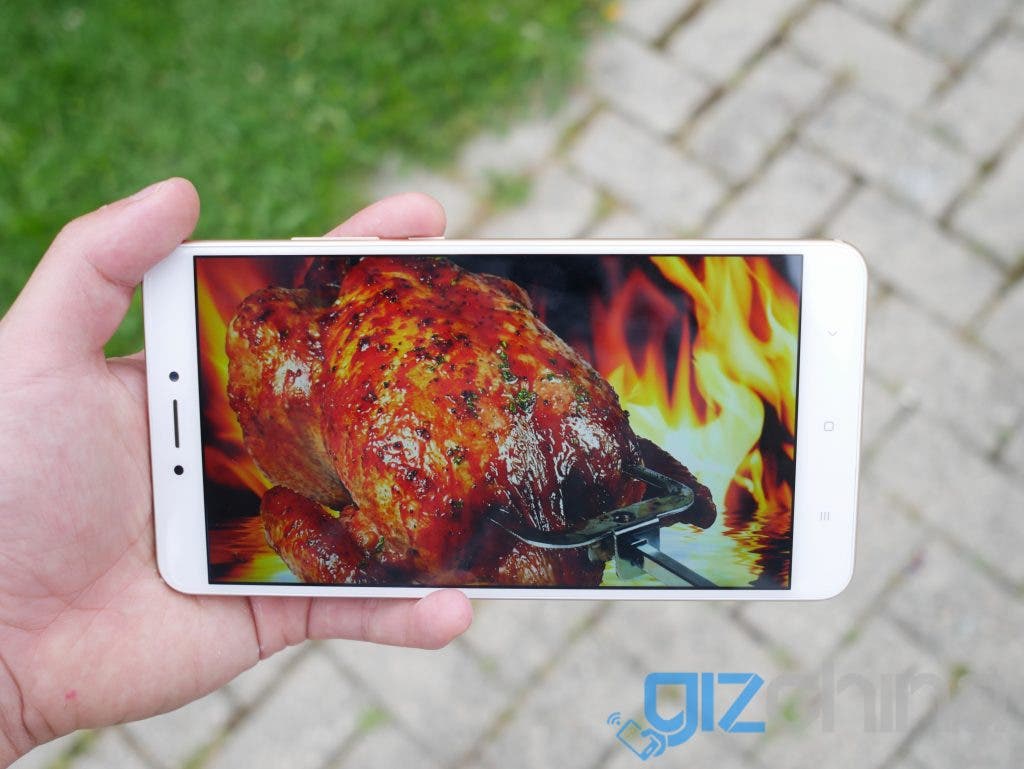 Xiaomi seems very reluctant to bump up any of its phones to a resolution of 2K, and whether that is due to design, pricing, or battery reasons, I applaud this decision. In my opinion, the resolution war is a game of diminishing returns; colour gamut, brightness, and contrast are just some of the other areas where displays could be improved.
The 1080p screen here is good, it reproduces the relatively pastel colour palette of MIUI well, and when looking at colourful stock photos or video, the screen still holds its own. The screen gets bright enough to put up a decent fight in direct sunlight but still gets overpowered on a hot, sunny day at noon. Minimum brightness is predictably good as well. Xiaomi has chosen to protect this phone using Gorilla Glass 4, so there’s no need to worry about scratches. 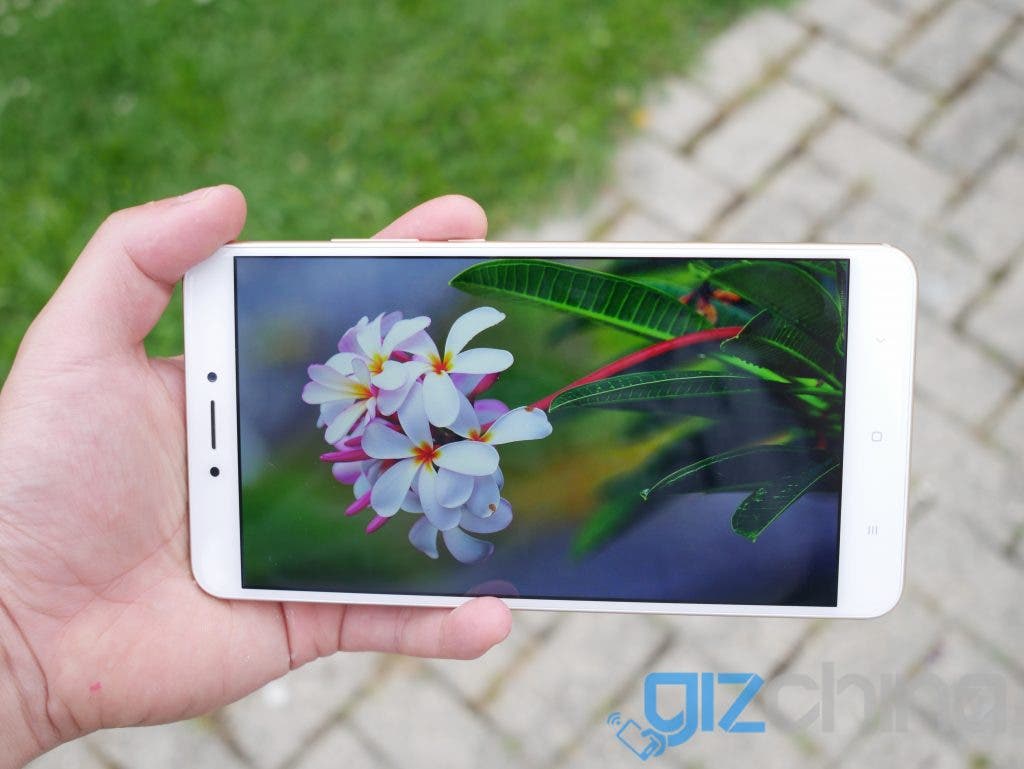 The speakers are one of the areas of this phone that gave me a huge surprise. I was expecting an OK speaker, but what I got was a separate tweeter/subwoofer system, the tweeter on the top and the mid/sub driver on the bottom. Combined, they pump out some very loud sound and very good quality also, there is an “Oomph” that this Mi Max 2 that other phones, even the Mi6 don’t have. 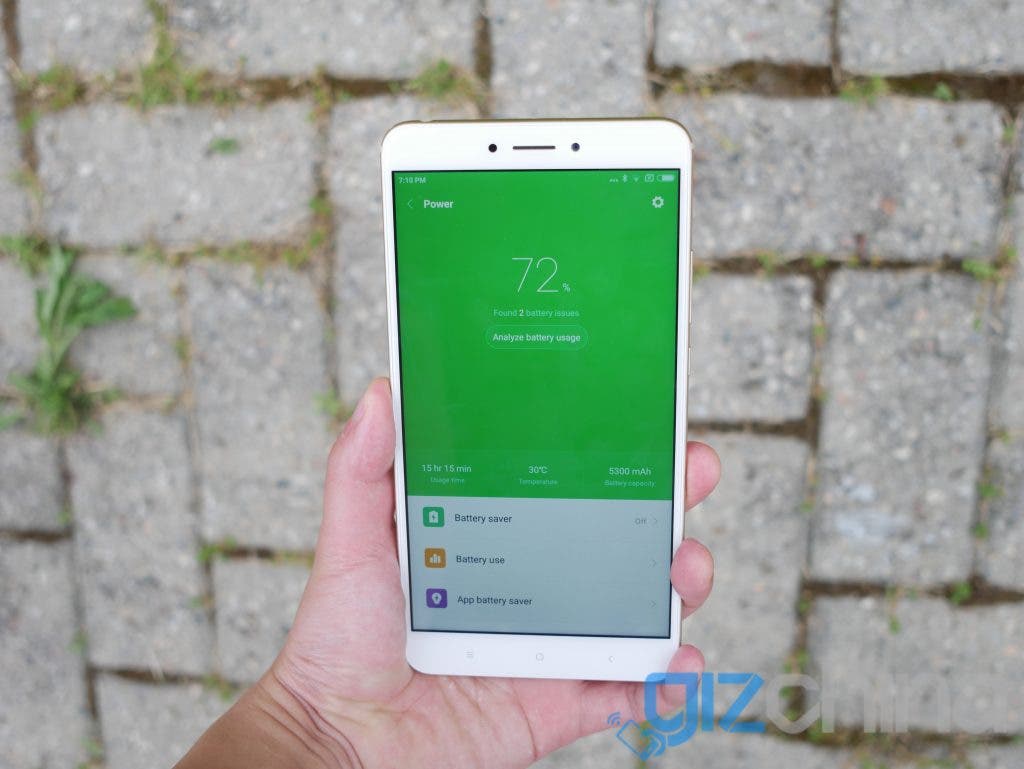 As a battery fanatic, this is the first time I’ve (rightfully) dreaded testing a phone for its battery. We here at Gizchina do plan to test the Oukitel K10000 Pro with a 10000mAh battery, and I really do pity the colleague who has to perform those battery tests. If my battery predictions are correct, the amount of time I spent testing this battery actually isn’t too far off from what my dear colleague will spend testing the K10000 Pro.
And my pain is your gain. The Xiaomi Mi Max 2 managed a whopping 23 hours and 4 minutes of local video playback before conking out. A more real world example is this:

Redmi phones remove the term “battery anxiety” from our dictionary, and the Mi Max 2 does exactly that. It obviously does this better than the Redmi devices due to a 1200mAh increase in capacity, but the 6.44” screen does suck up a little more juice. The phone is also Qualcomm Quick Charge 3.0 capable, so topping up that massive 5300mAh takes a rather normal two and a half hours.

What is Battery Anxiety? 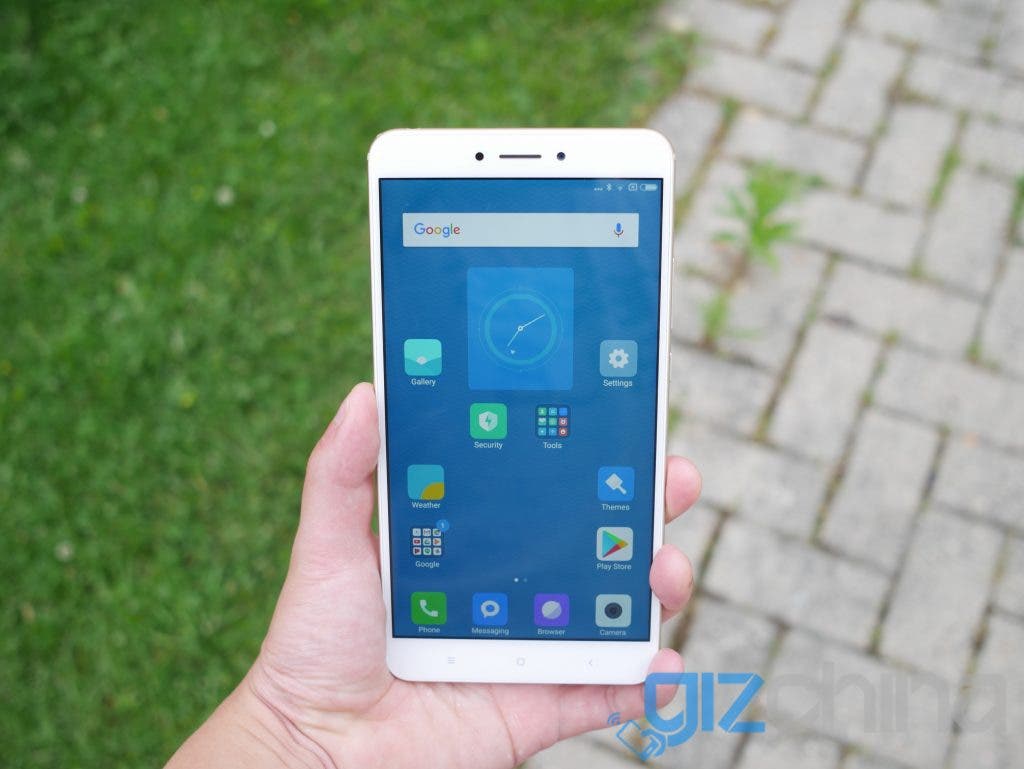 The Snapdragon 625 paired with 4GB of RAM is able to push MIUI very quickly and fluidly. I did not see any slowdowns when interfacing with MIUI, but I did see very slight hesitation when launching apps when compared to my well used Zuk Z2. 4GB of RAM is plenty for multitasking, and filling up that much RAM at this point in Android’s evolution is more difficult than it looks under normal circumstances, meaning you won’t have any issues with multitasking unless doing something unusual. Performance is as one would expect from a Snapdragon 625 phone, within spitting distance of the Redmi 4 Prime and Note 4X. The Snapdragon 625 performs admirably in gaming, no slowdowns detected.

The fingerprint sensor is fairly fast. The phone would be unlocked by the time I took the phone out of my pocket. To be fair, I did struggle taking the phone out of certain pant pockets that were too tight for my girth. Do note that the fingerprint sensor is hard to reach which results in awkward finger placement on the sensor. This resulted in lower than usual accuracy when tapping the sensor, I usually had to tap it a second time to successfully unlock the phone. However, when using this phone two handed, this allowed me to position my hand much more freely, cutting down on virtually all fingerprint errors. 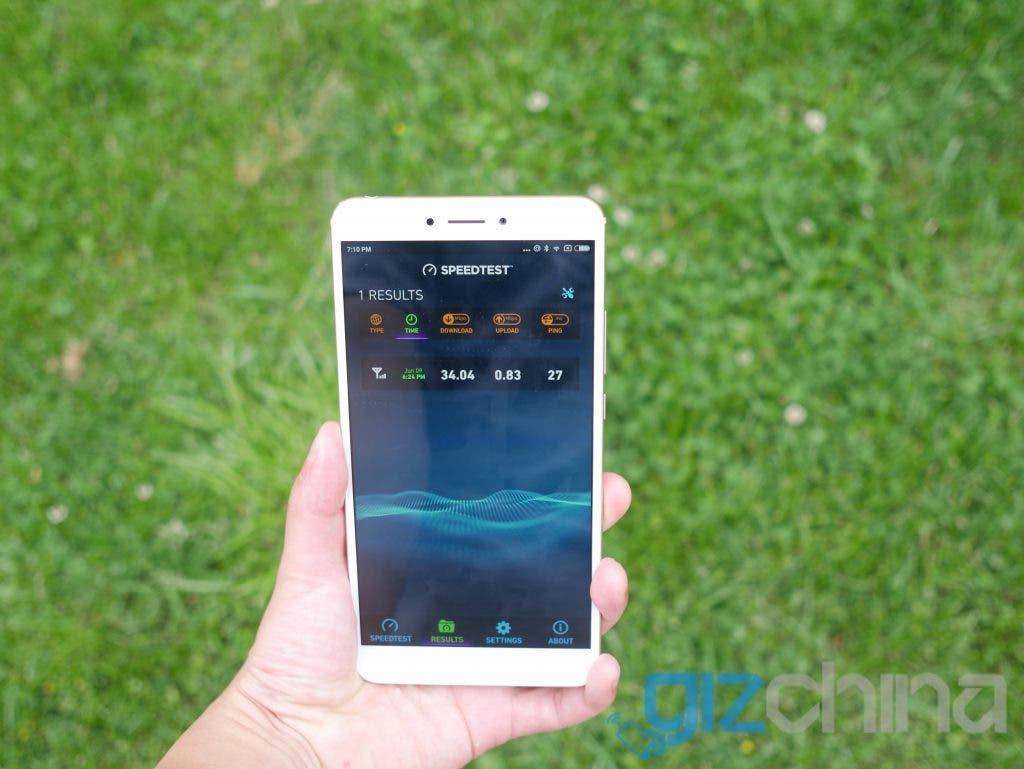 The international version of the Mi Max 2 supports both TDD-LTE and FDD-LTE bands, meaning it will work almost anywhere. I was able to get 2G, 3G, 4G, and LTE on my carrier here in Canada. I never have issues with network speeds on this phone as evidenced by the speedtest performed here. I was able to connect to every single Bluetooth device I owned, and GPS performance is accurate and fast as well. 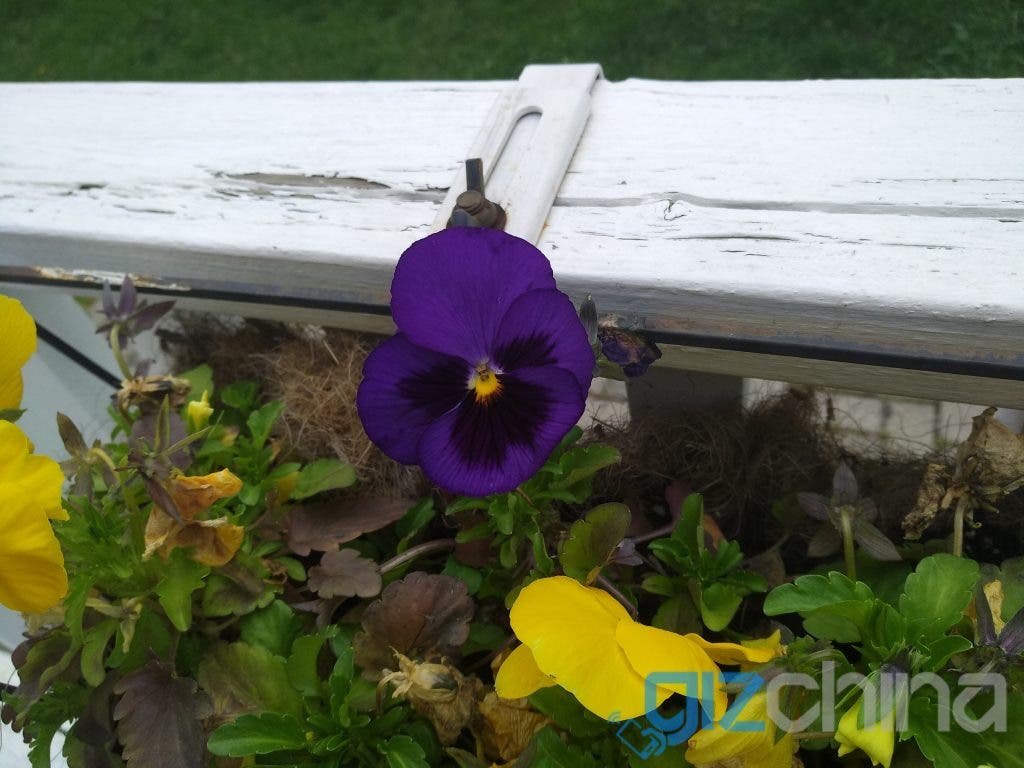 The camera is the secret weapon I was talking about in the introduction. While the battery life might be the crowning achievement, the camera is why you’ll buy this phone over the other Snapdragon 625 Redmis. The Mi Max 2 uses the same IMX386 sensor found in the Xiaomi Mi6. Software is just as important as hardware when creating a high quality picture; and the Mi Max 2 does quite a good job. 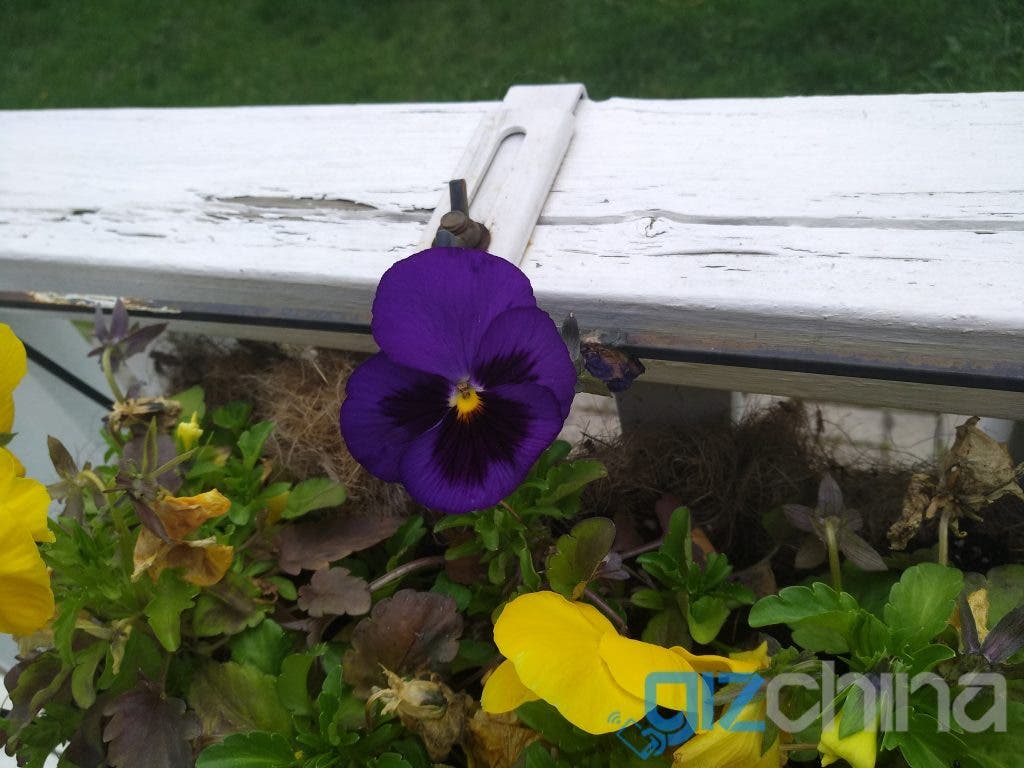 In daylight with perfect lighting conditions and no camera shake (this is important), the difference in detail between the Mi6 and Mi Max 2 is negligible. There is still a slight but visible difference when zoomed in all the way, but it’s the same for all normal intents and purposes. The Mi6 does capture brighter, more vibrant colours while the Mi Max 2 settles with deeper, darker, and more accurate shades. I have a feeling that most individuals will prefer the vibrant colours from the Mi6 over the Mi Max 2, but this comes down to personal preference. 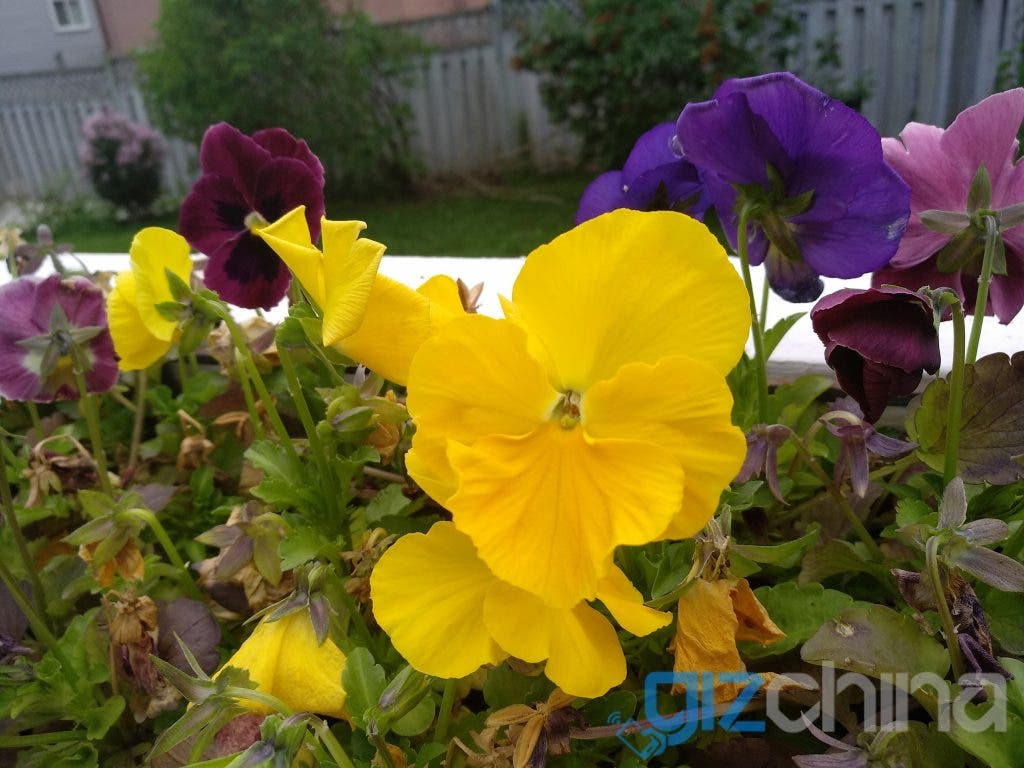 Taking the previous situation with perfect lighting, let’s add in some camera shake. This is where we start seeing quality take a large deviation. Whereas the Mi6’s 4 axis OIS kicks in to stabilize the camera, the Mi Max 2 takes blurrier shots. Do note that the blur is actually hard to detect if seen on a phone screen, but it is more apparent on a computer monitor.
The gap in quality widens even more in low light conditions. The Mi Max 2 starts blowing out ISO to get the pictures bright enough and you do see more noise and grain in the Mi Max 2 compared to the Mi6. That’s not to say the Mi Max 2’s low light performance is horrible though. It’s still miles ahead of many other phones, and outpaces the Redmi Note 4X by quite a margin as well. 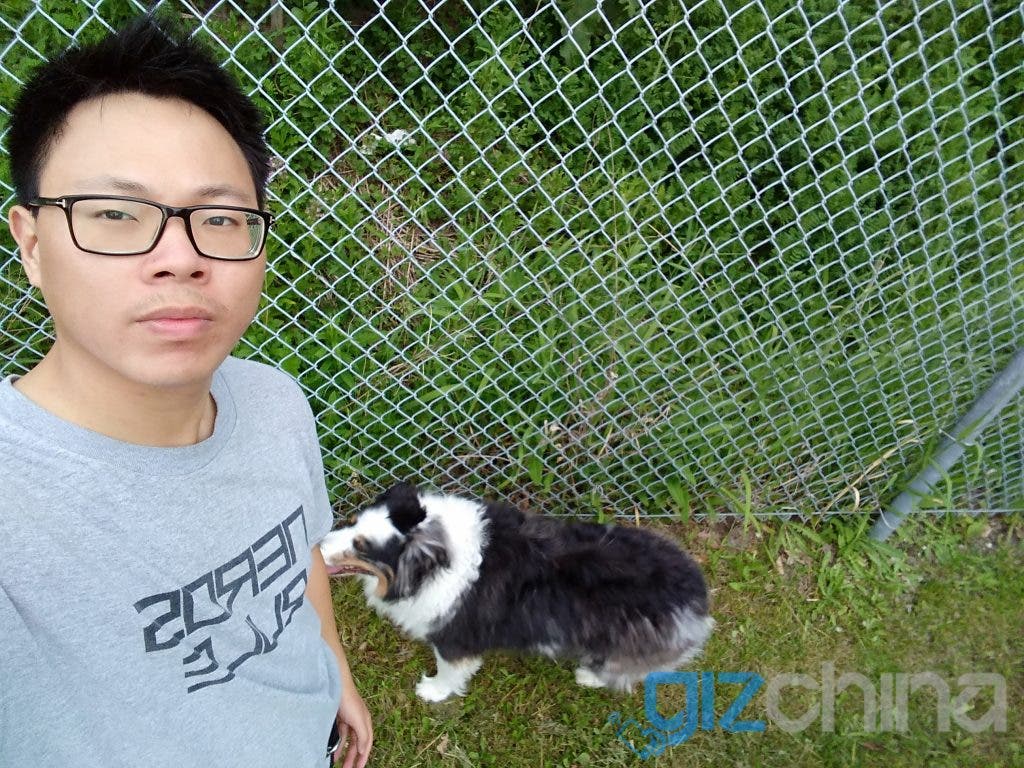 The front camera is actually pretty typical for a Redmi device, meaning that it’s passable but quality isn’t great.

You can capture up to 4K video on the phone, and footage is crispy, colours are still somewhat deep and dark, but footage is nevertheless great.

The current iteration of the Mi Max 2 is the most intriguing Snapdragon 625 phone I’ve tested because of two reasons; its crowning achievement and its secret weapon. Its crowning achievement is battery life so unreasonably good that even the Redmi 4 Prime and Redmi Note 4X have trouble keeping up. Second, its secret weapon, the camera, takes some amazing shots in daylight, keeping up with the flagship Xiaomi Mi6. On the other hand, its weaknesses are quite nondescript, mostly. 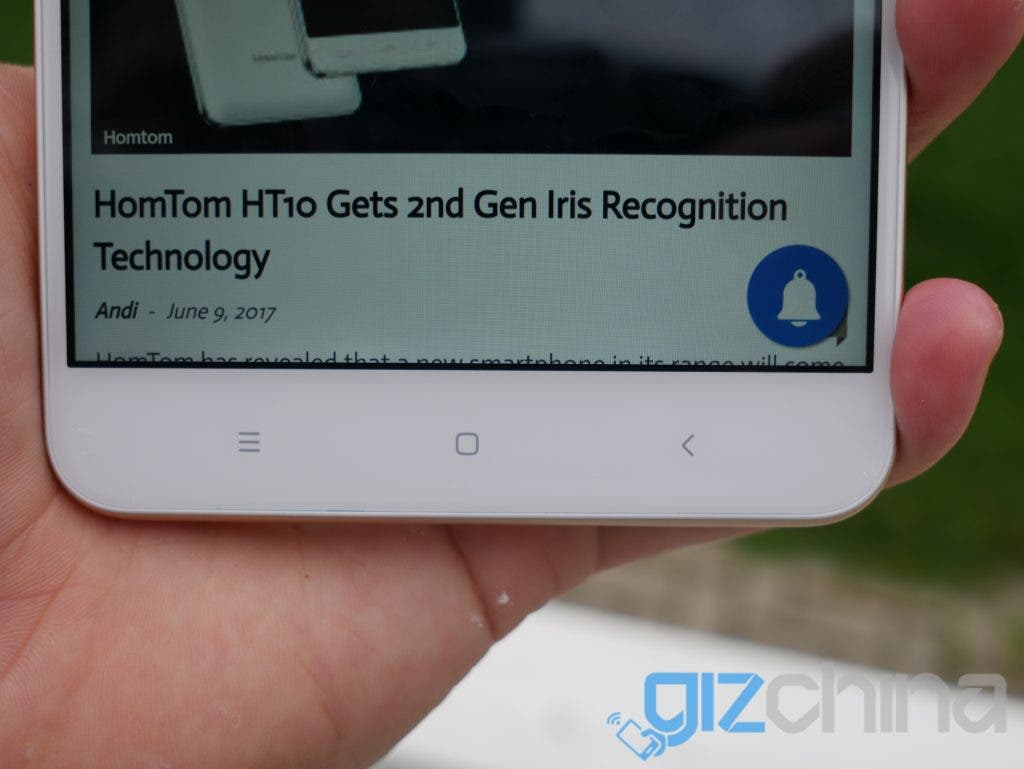 It still has a black bar around the screen, the fingerprint sensor is difficult to reach, and the front facing camera is nothing to write home about (unlike the rear camera). I won’t spend any time ranting about Xiaomi using a Snapdragon 625 in yet another one of their phones as I’ve discussed that at length here in this opinion piece. All in all, the Mi Max 2 is another great device from Xiaomi. My recommendations? Phablet lovers should buy this, Snapdragon 625 haters should not, and if you’re looking for a great camera in a non flagship device? Definitely.