Huawei just announced that the Midnight Black variant of its Honor 9 model will be launched next week, specifically on July 18. 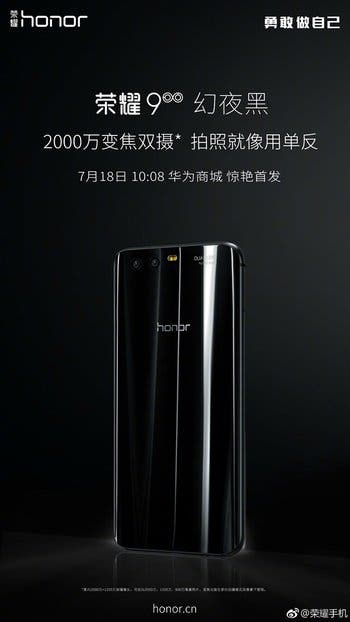 In case you don’t remember, Huawei’s best seller features a 5.15-inch 1080p display and is powered by a Hisilicon Kirin 960 chip with 4GB /6GB RAM as well as 64GB /128GB storage versions. It comes with a 3200mAh battery and a dual 20MP + 12MP camera similar to the Mate 9 and Huawei P10’s but without the Leica branding while at the front, there is an 8MP sensor. It’s available in 4 color variants: Glacier Grey, Sapphire Blue, Gold, and Midnight Black colours and starts at 2299 Yuan (∼$338).

So its pricing should be similar to other color variants. Note also that recently, Huawei CEO revealed that they’ve managed to sell over 1 million Honor 9 units in less than a month, which means that the phone is really successful so far.

Next AllCall Rio: An Affordable Bezel-less Phone - Why should you get one?