It seems that Samsung is getting ready – once again- to further boost its mid-range portfolio of smartphones, with the Galaxy A5 2018, a device that has been spotted on Geekbench with an Exynos 7885 chipset, which is interesting on multiple levels. 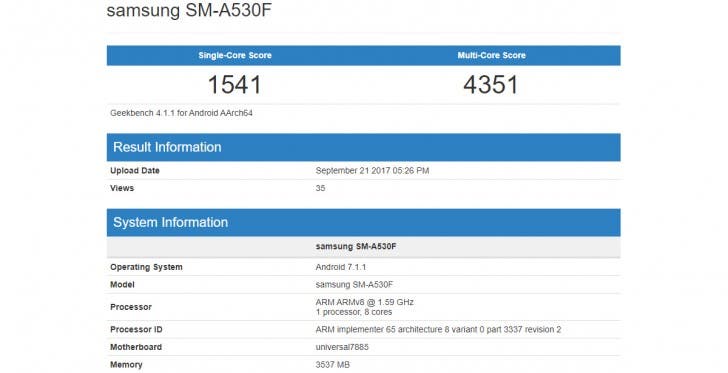 Note that this chipset hasn’t been officially announced yet but according to recent rumors it is expected to be manufactured on the 14nm architecture, same as the 7880 it replaces. However, it will have two Cortex-A73 cores for power, in addition to six A53 cores. The older chipset was at the heart of the Galaxy A5 (2017) and had eight A53 cores.

According to the results of this Geekbench listing, the upcoming Galaxy A5 2018 model should be powered by a Snapdragon 660 SoC, along with 4GB RAM (or 6GB depending on the model) and Android 7.1.1 Nougat – while waiting for an official Android 8 Oreo update that is.

Oh and in case you forgot, the international version (F) of the Samsung Galaxy A5 (2018) will come with an Exynos chip, the Chinese version (0) will use Snapdragon and will have 6GB of RAM.

Next OnePlus 3/3T get OxygenOS 4.5 OTA update with new features!