Till date, iPhone 8 Plus remains Apple’s most expensive smartphones to produce. IHS Markit said that the reason for the high price is “a result of slower annual component cost erosion tied in with additional features”. Recall that this device sports an extra 32 GB of storage and additional wireless charging components. However, analysts believe that the price rise will plausibly help to sustain a good margin between Apple devices. 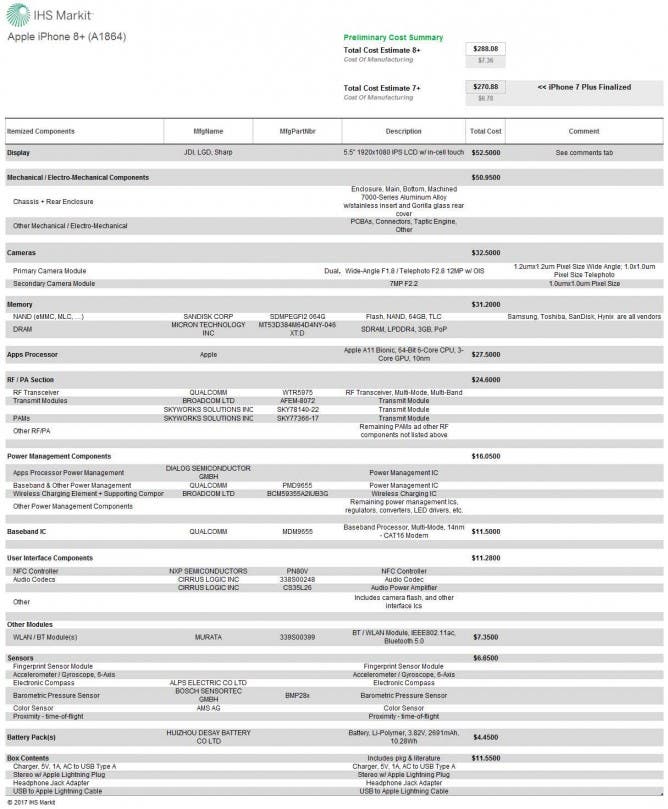 “The higher total BOM cost for the iPhone 8 Plus can’t be tied to a single area or feature. The higher cost is the result of slower annual component cost erosion tied in with additional features”

From the detailed breakdown of this device, the most expensive part is the display. The screen cost $52.50 while the associated chassis and connectors require $50.95. The display is followed by the camera setup which cost $32.50. The NAND memory and its A11 Bionic chipset cost $31.20 and $27.50 respectively.

IHS Markit, a world leader in critical information, analytics and solutions has not yet done a teardown on the iPhone X, which costs $999. However, it is quite certain that its BoM will surpass iPhone 8 Plus when you consider its superior OLED screen and other advanced features such as facial recognition.

Previous Apple iOS 11.0.1 update is now available for the iPhone and iPad

Next iPhone X gets certified by TENAA, comes with 2716 mAh battery