When Xiaomi started a few years ago, it had an online marketing strategy but right now, Xiaomi is no longer limited to online sales as it has numerous stores in China and in other countries most recently in Thailand, Greece, and Malaysia. On the 1st of October, the Chinese manufacturer opened 20 new Mi Stores in China as part of its set goal to open 200 Mi Stores across China. And today, Xiaomi president Lin Bin announced on Weibo that 5 new Mi shops will be opened across China tomorrow. 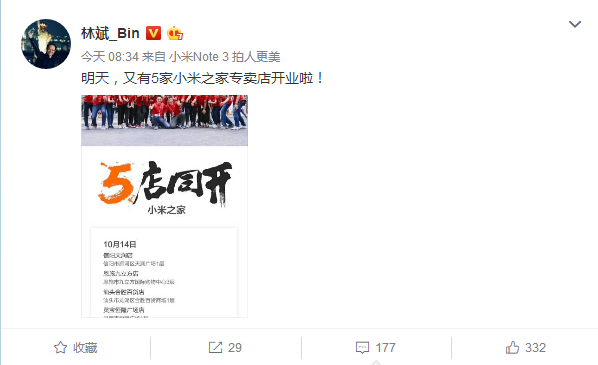 Xiaomi stores in China is rapidly expanding due to the wide acceptance of this brand, however, there are regions like Lanzhou, Haikou and other provincial cities that do not have the Mi store and the company have asked these areas to be patient. The 5 new stores include Xinyang Tianrun shop, Enshi nine cubic shop, Shantou Heisheng department store, Lingbao Hang Lung Plaza shop, and Shenzhen Union Investment Union East shop.

From the current speed, Xiaomi will likely open about 2000 Mi stores globally over the next 3 years. This expansion is generating some benefits for Xiaomi. Earlier, Lin Bin revealed that Xiaomi Home Ping effect performance has so far generated 260,000 Yuan.

Xiaomi closes its first and only Mi Store in the UK