The latest report from Canalys is full of interesting news as you might agree after reading this article. The well known research firm reported today that India is now the second largest smartphone market in the world, as it managed to overtake the US, with the total smartphone shipments in the country reaching 40 million units in Q3, and 46.5% of them accounted to Samsung and Xiaomi! 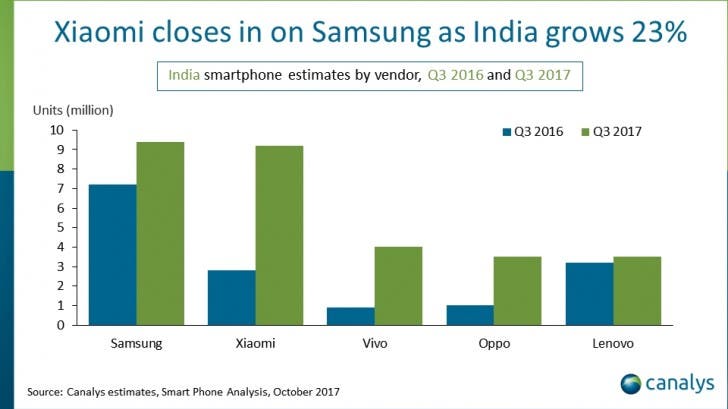 The S. Korean behemoth (Samsung) is still in the lead with 9.4 million shipments, but Xiaomi has made an impressive return with more than 9.2 million units sold in the country, most of them being low-end smartphones, since it struggles in the mid-range, according to Canalys.

The other companies (Samsung, Oppo, Vivo) perform better in the mid-range segment of the market (in the price range between INR15,000 and INR20,000 or $230-$310), but if Xiaomi continues to perform likewise then the Chinese company could overtake Samsung within a couple of quarters, said analyst Rushabh Doshi.

Apple is not present on the chart as you might (not) see, as the company focuses on premium devices and the low-spec Indian market seems to be a hostile environment for significant sales.

According to Canalys, shipments in India will continue to focus on low-end smartphones and those that are 4G/LTE compatible for the next months, so the US is unlikely to be able to return to the second position.