Meitu is gearing up to launch a new luxury flagship smartphone in a few hours from now. Known as the Meitu V6, Meitu has officially confirmed that it would be launching the device in China on November 1.

Earlier spotted on TENAA, the Chinese certification site, the Meitu V6 will arrive in two variants– a 4GB RAM variant and a 6GB RAM variant. Both will be available only in 128GB storage option with provision for further expansion.

The TENAA listing suggests that the Meitu V6 will come with a 5.49 “OLED screen with a resolution of 1920×1080 pixels. It is expected to boot  Android 7.0 Nougat out of the box. The phone will be powered by a MediaTek deca-core Helio X30  with CPU with a maximum frequency of 2.8 GHz.

The stylish Meitu V6 is expected to feature a 12MP primary camera, with a secondary camera sensor of unknown pixel count with LED flash and a dual front camera. 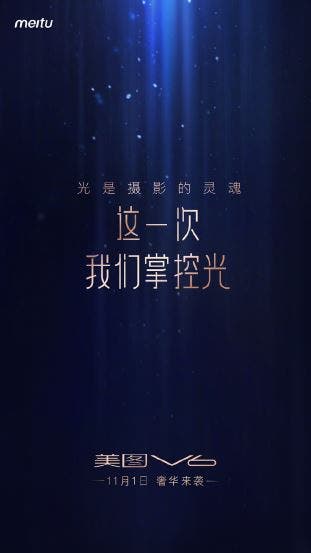 Dual SIM, 4G VoLTE, Wi-Fi, Bluetooth and more are tipped to be parts of the connectivity options, while a 3100mAh battery will the device lighted. When announced, you should expect to get the device in fiery red (pictured), ice-blue, dark purple colors, and also the mysterious coloring “Monet’s powder.”

Previous OnePlus 5T render shows top half of the phone, coming from a reliable source