If bezelless phones weren’t a thing, the Xiaomi Mi Note 3 would be impressively compact. However, bezelless phones turn the Mi Note 3 into a rather unsightly affair just by virtue of comparison.
Standing in the shadow of a MIX is never an easy thing, and couple that with the expectation of a flagship level processor in a Note phone, the Mi Note 3 is turning out to be one controversial beast indeed.

Xiaomi’s processor choices in many of their phones have been less than… desirable, with many of their higher end devices utilizing the low powered Snapdragon 625 processors, and now the Mi Note 3 is following suit, taking a step down from a high end chip to a midrange one. I have no doubt that Xiaomi has crafted an excellent and refined device, but public perception (from enthusiasts at least) due to the processor stepdown has been rather biting. Let’s get into what Xiaomi got right and what they got wrong.

A step down from the previous generation 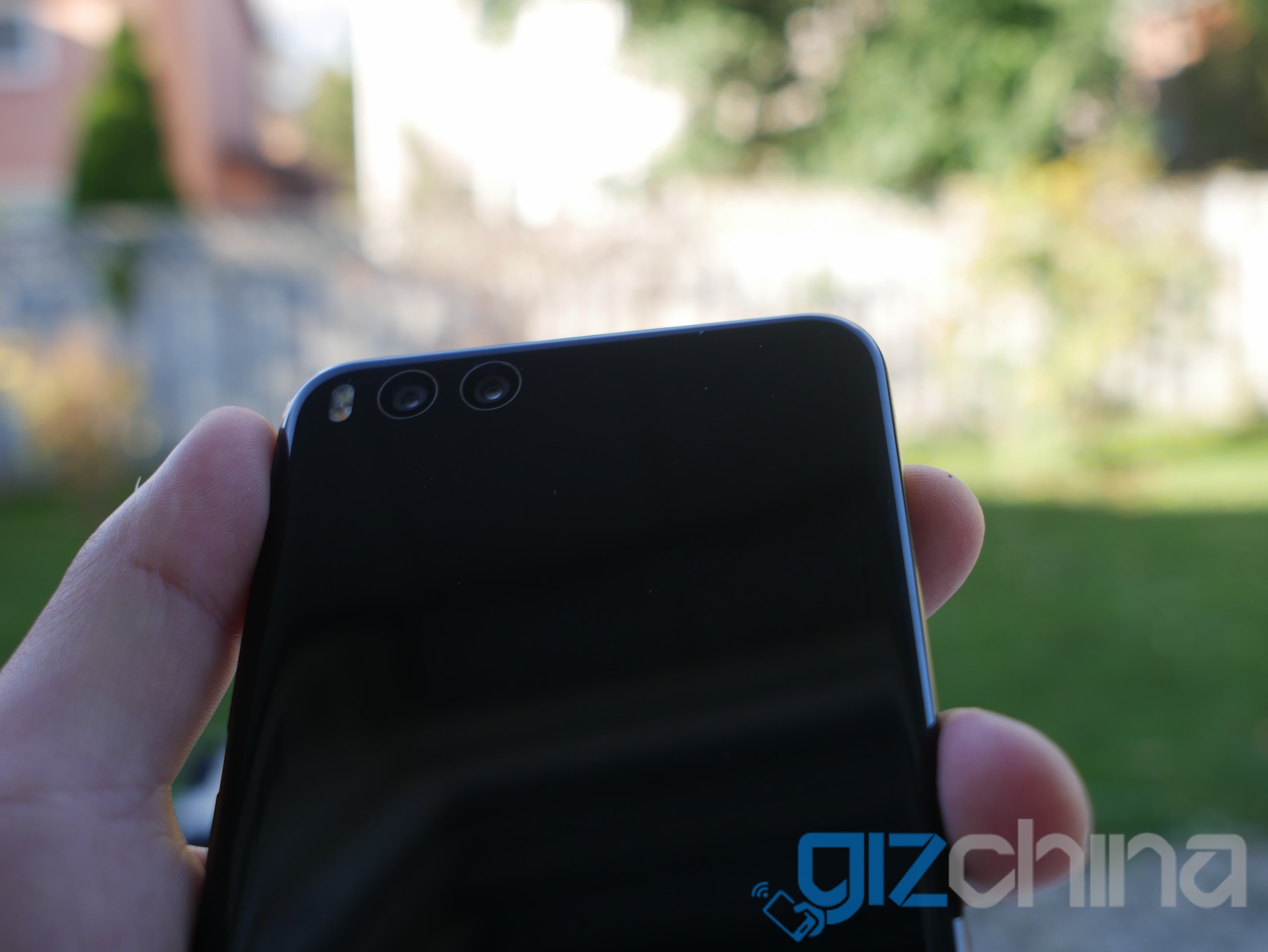 The Mi Note 3 looks exactly like the Mi6, even down to the positions of the sensors, home buttons, and camera location. However, this means that both the Mi6 and the Mi Note 3 look fairly generic, with no standout features like bezelless displays or 18:9 aspect ratios. We have very slim side bezels and rather chunky top and bottom bezels that make the phone look and feel a little bit dated, considering the industry’s recent shift to a bezelless philosophy. We have generous curves on the back and a slim 8.3mm profile, the Mi Note 3 is easy to hold, even for an adamant 5 incher like myself. 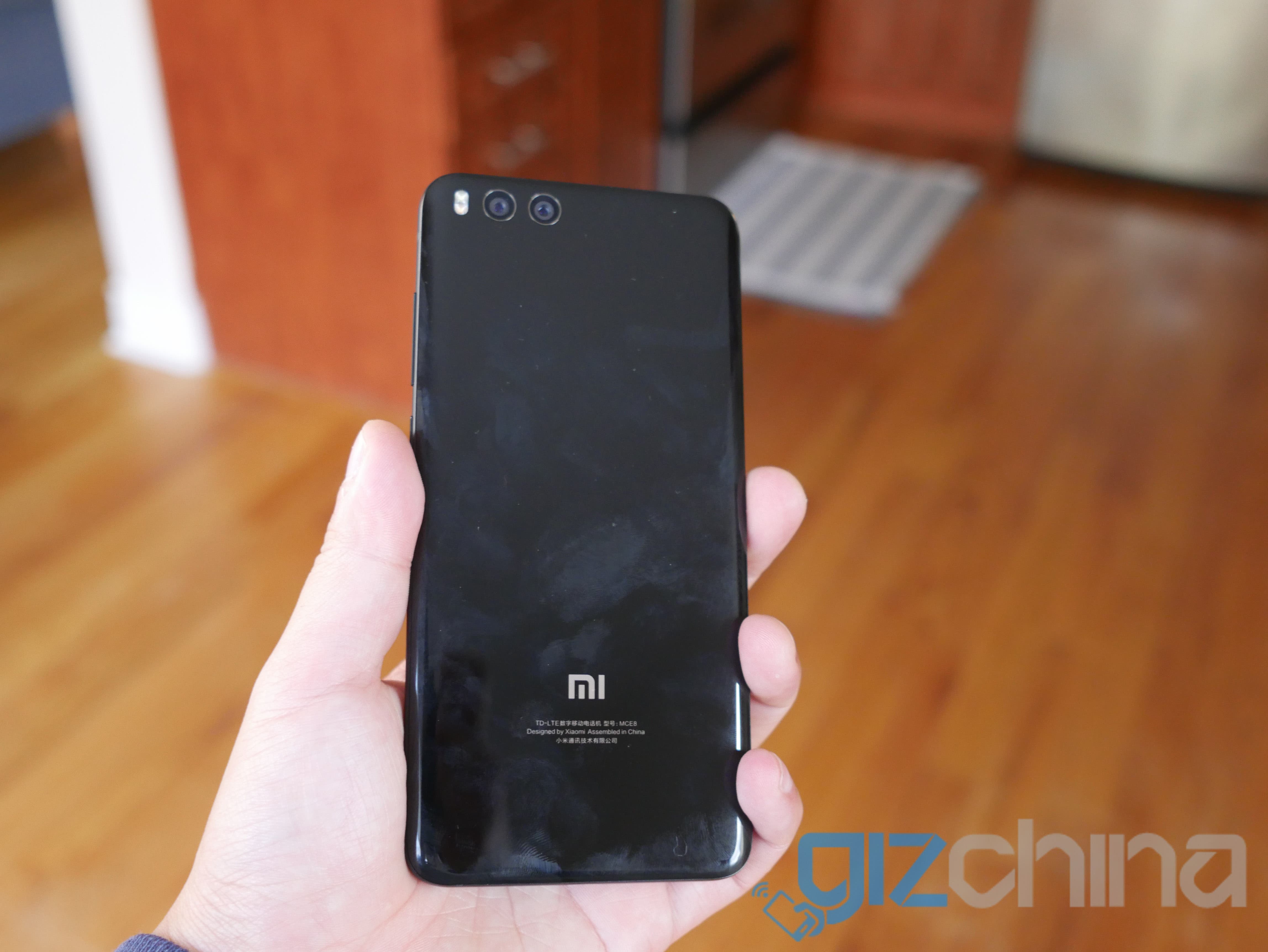 The back of the phone is glossy and a complete fingerprint magnet. Expect this phone to look pristine for all of 5 seconds before becoming a mess of fingerprints, but who am I kidding, we’re all going to be putting a case on this thing anyway. 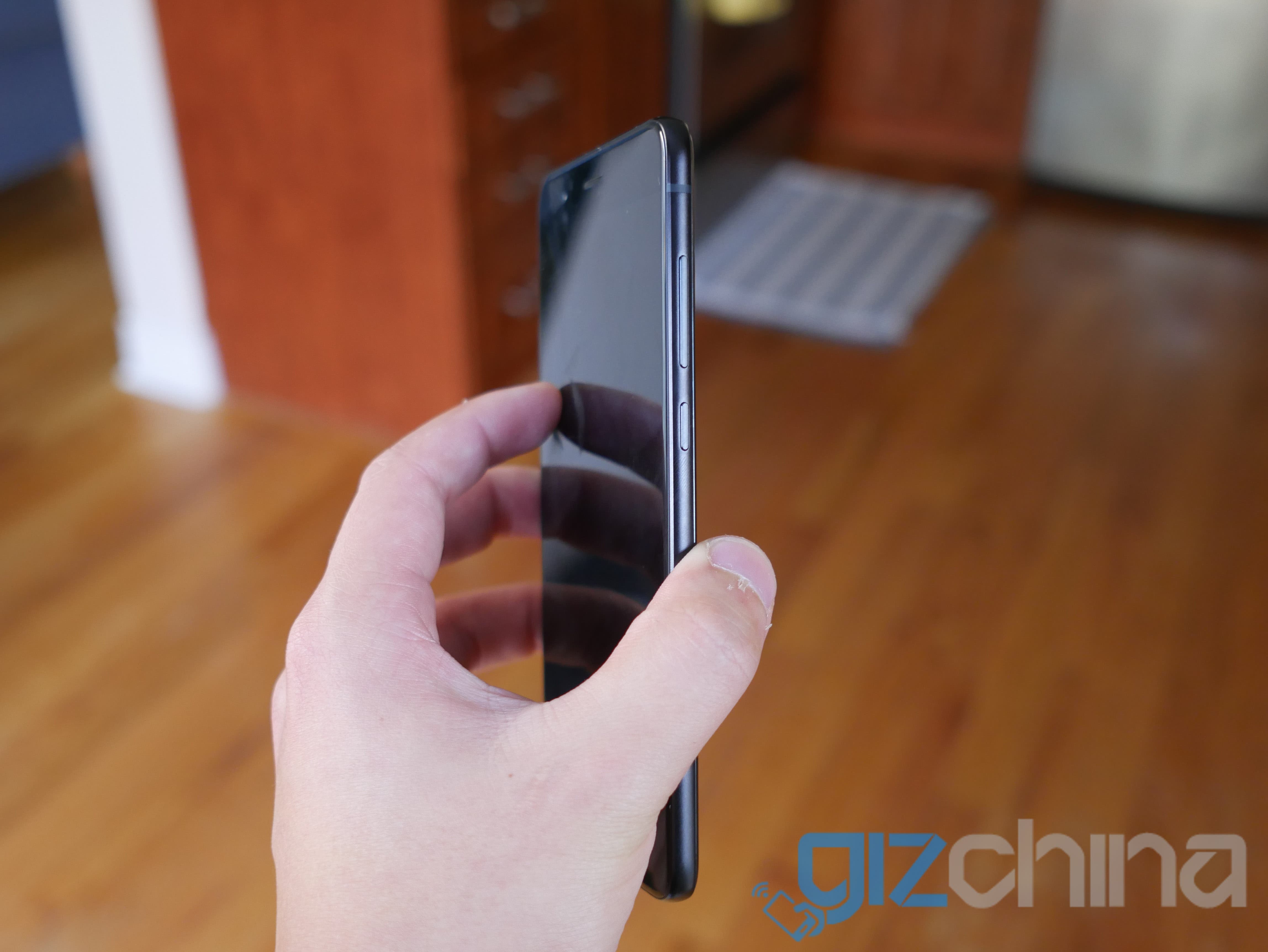 Xiaomi made no mention of water resistance and we are quite certain this phone is not water resistant either. The biggest complaint I’ve heard is the removal of the headphone jack. It seems like everybody and their mother is taking this out, with Motorola and Apple leading the charge. To be honest, this does not affect me personally as I’ve moved completely to Bluetooth headphones, but a physical jack would definitely be handy if (and when) I do forget the 3.5mm to USB-C dongle. We find a microSD card slot conspicuously missing. 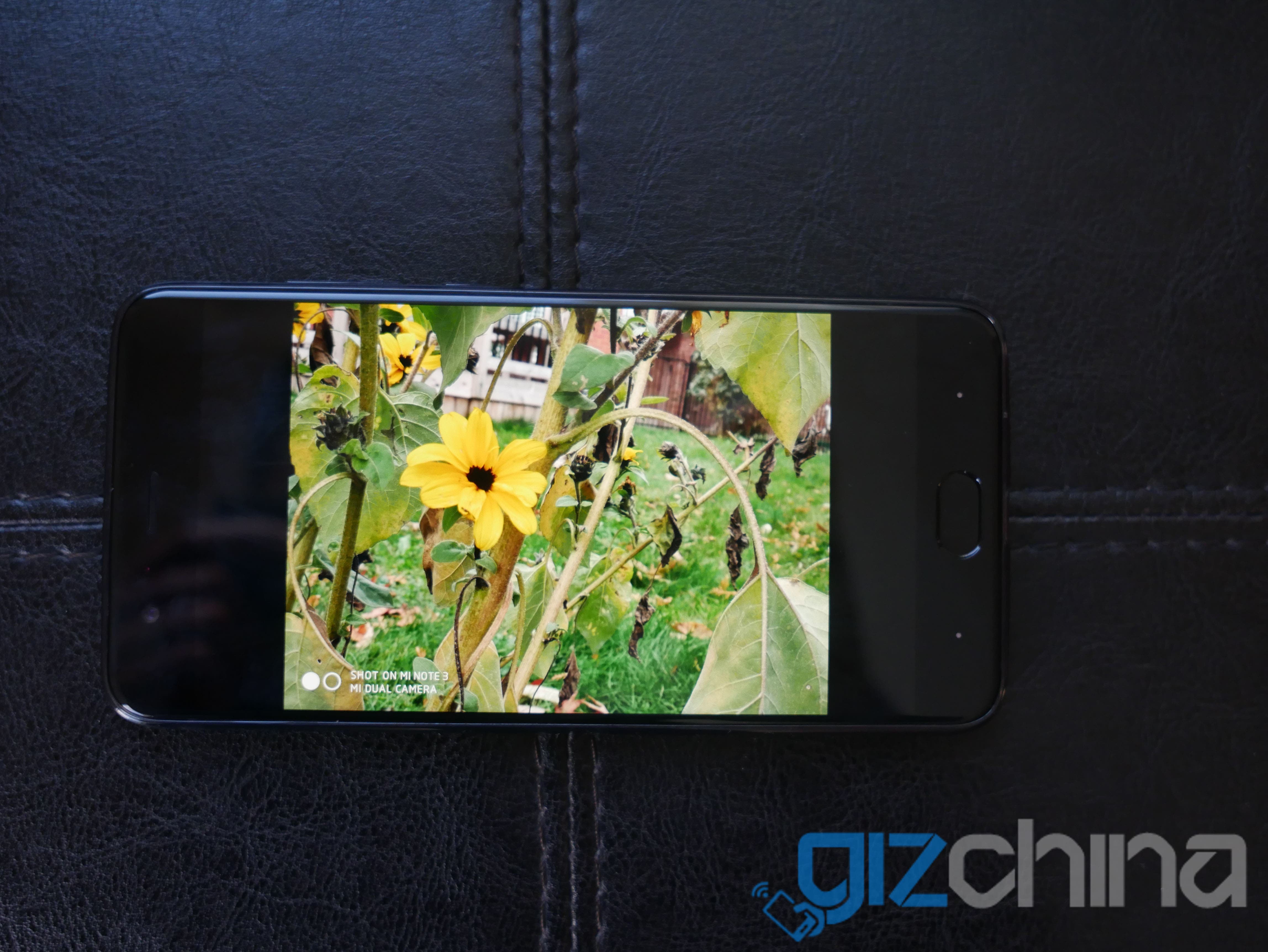 The older Mi Note 2 utilized an AMOLED display with the controversial Pentile arrangement, but this time Xiaomi has transitioned the Mi Note 3 away from AMOLED back to regular old LCD. The LCD screen at first glance is merely average because of the pastel colour palette that MIUI generally adopts, however you start seeing how vibrant and colourful the screen can get when you peek at a colour video or photo. The resolution stays at 1080p instead moving up to 2K, and this is in my opinion the right decision, no need to take that small hit in battery life for more pixels that have a nigh imperceptible difference, focus instead on improving colour gamut and contrast. Maximum brightness tops out around 550 nits, more than enough for use in direct sunlight while the screen brightness dims to a barely visible level in a dark room. Touch response is excellent and we have Gorilla Glass 4 covering the screen also. 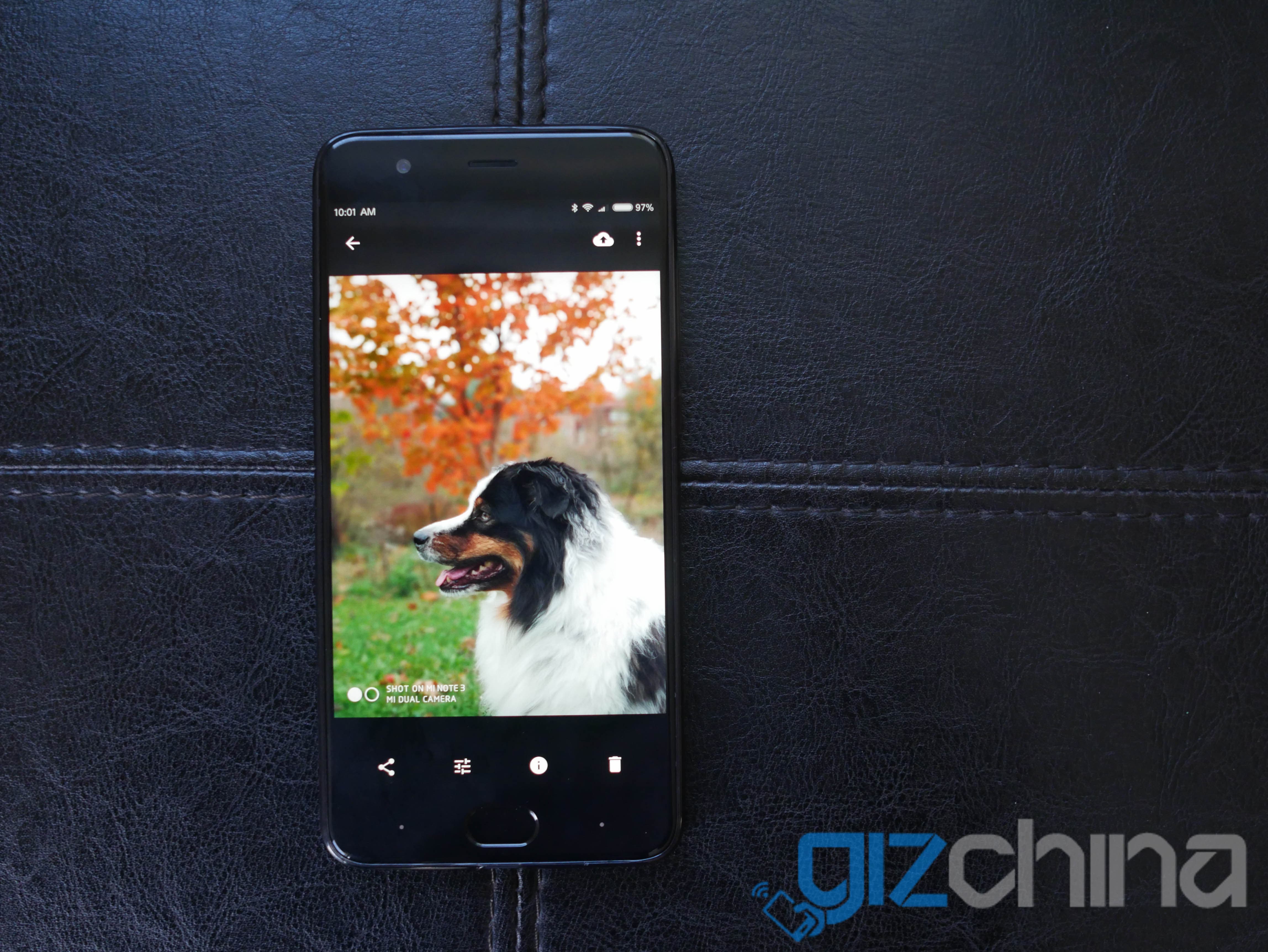 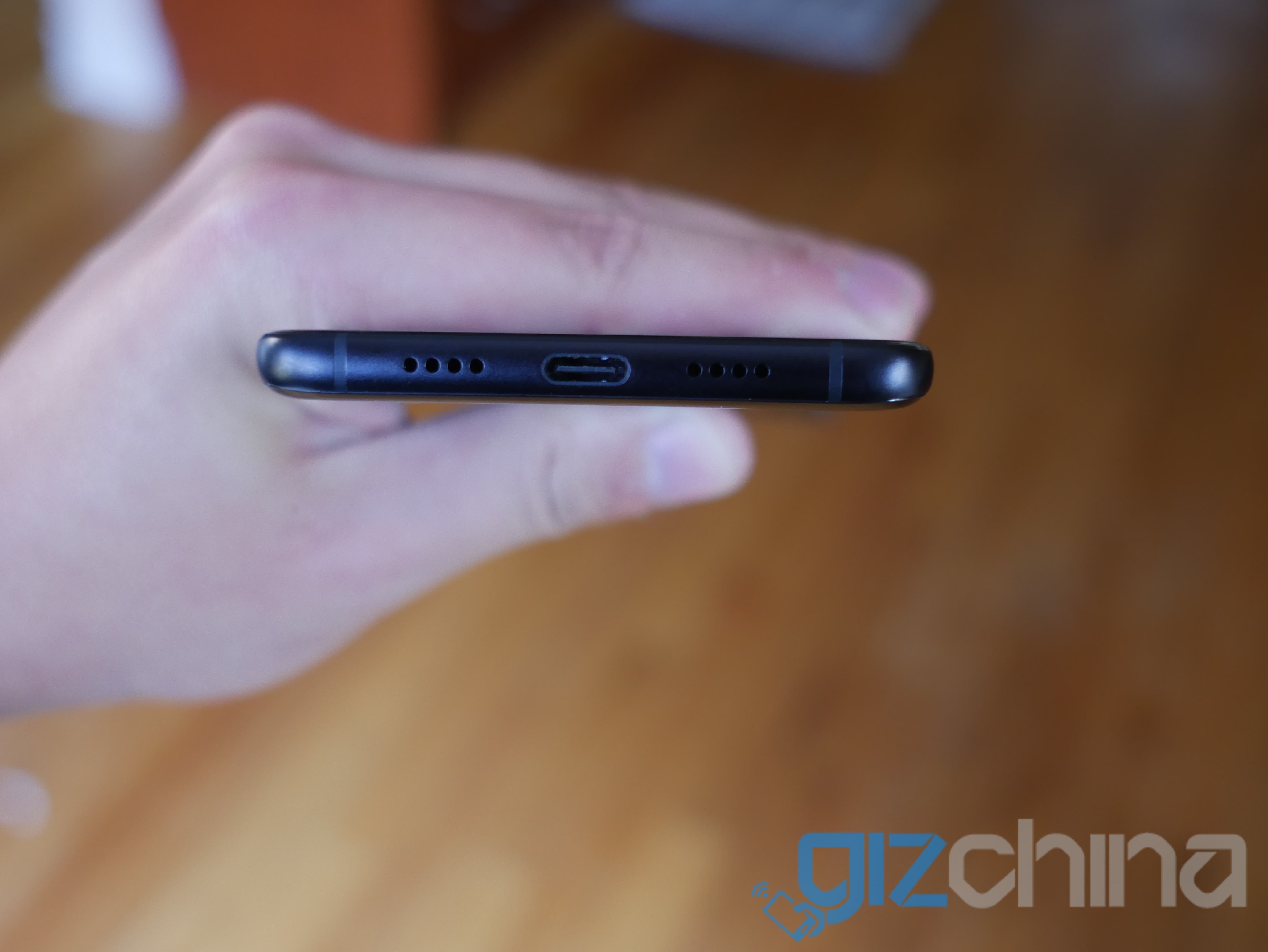 The dual stereo speakers produce excellent sound volume, easily matching the Xiaomi Mi6 and the older Mi Note 2. Audio quality is also good, an almost imperceptible difference between the more expensive Mi6 and this Note 3. However, it does distort at max volume occasionally. 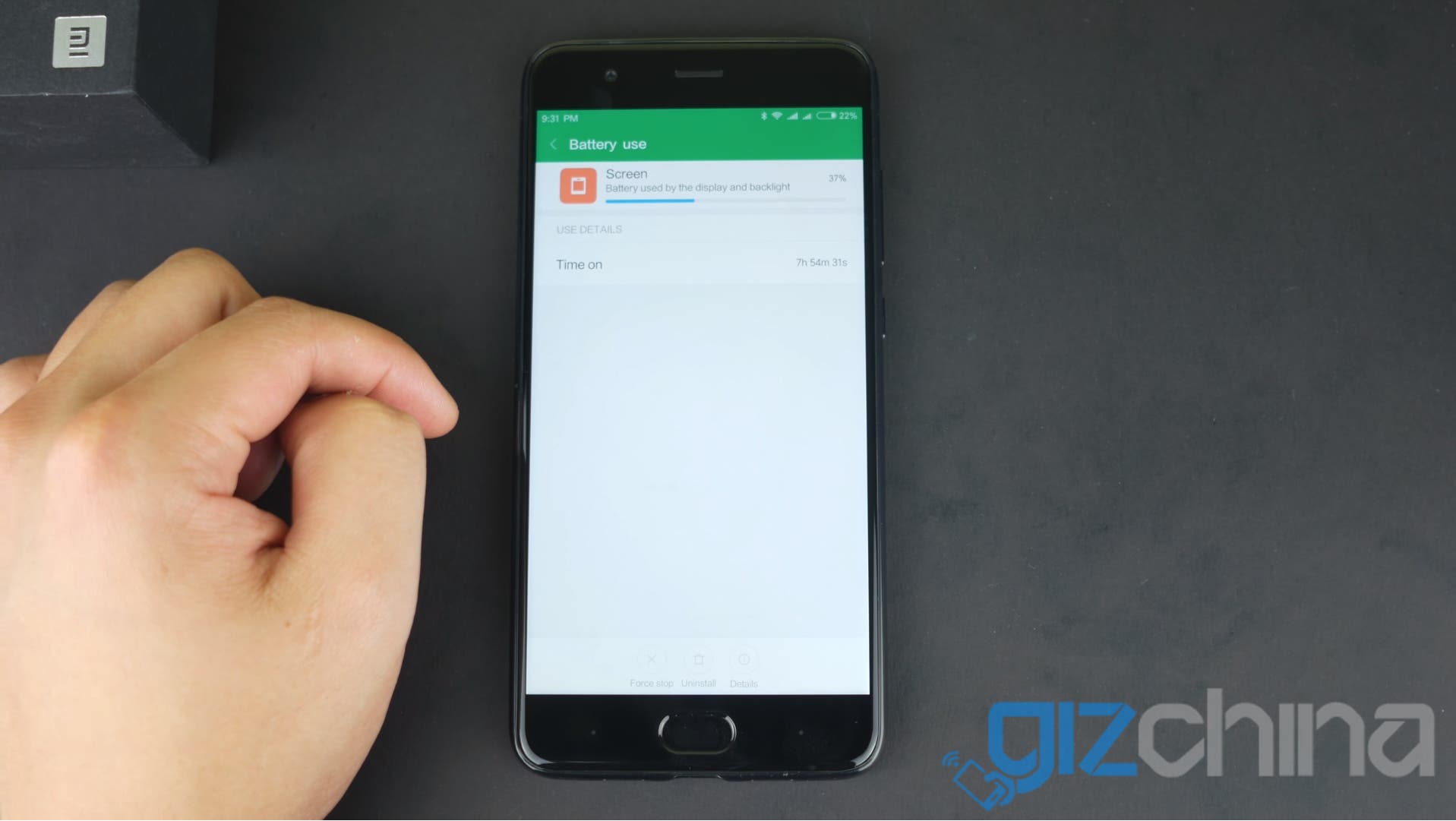 I have pretty high hopes for battery life. While I fully expect the Snapdragon 660 to be less power efficient than the Snapdragon 625, it shouldn’t fall that far behind. I am pleased to say that battery life here is excellent. Not Redmi Note 4X levels of excellent, but good nonetheless. I was able to get 8 hours of screen on time easily over a 16 hour day with over 20% left. This was a varied mix of use cases, about two hours of YouTube, two hours of gaming, and the rest was web browsing, Reddit, and social media. I also played music through Bluetooth for two hours also. While this isn’t going to match what the Redmi Note 4X is getting, it’s a lot closer to the Xiaomi Mi5x/Mi A1, even heavy users will be able to get through a single day without problems. The phone is also QuickCharge 3.0 capable, and I could bring the battery to 70% within a single hour. 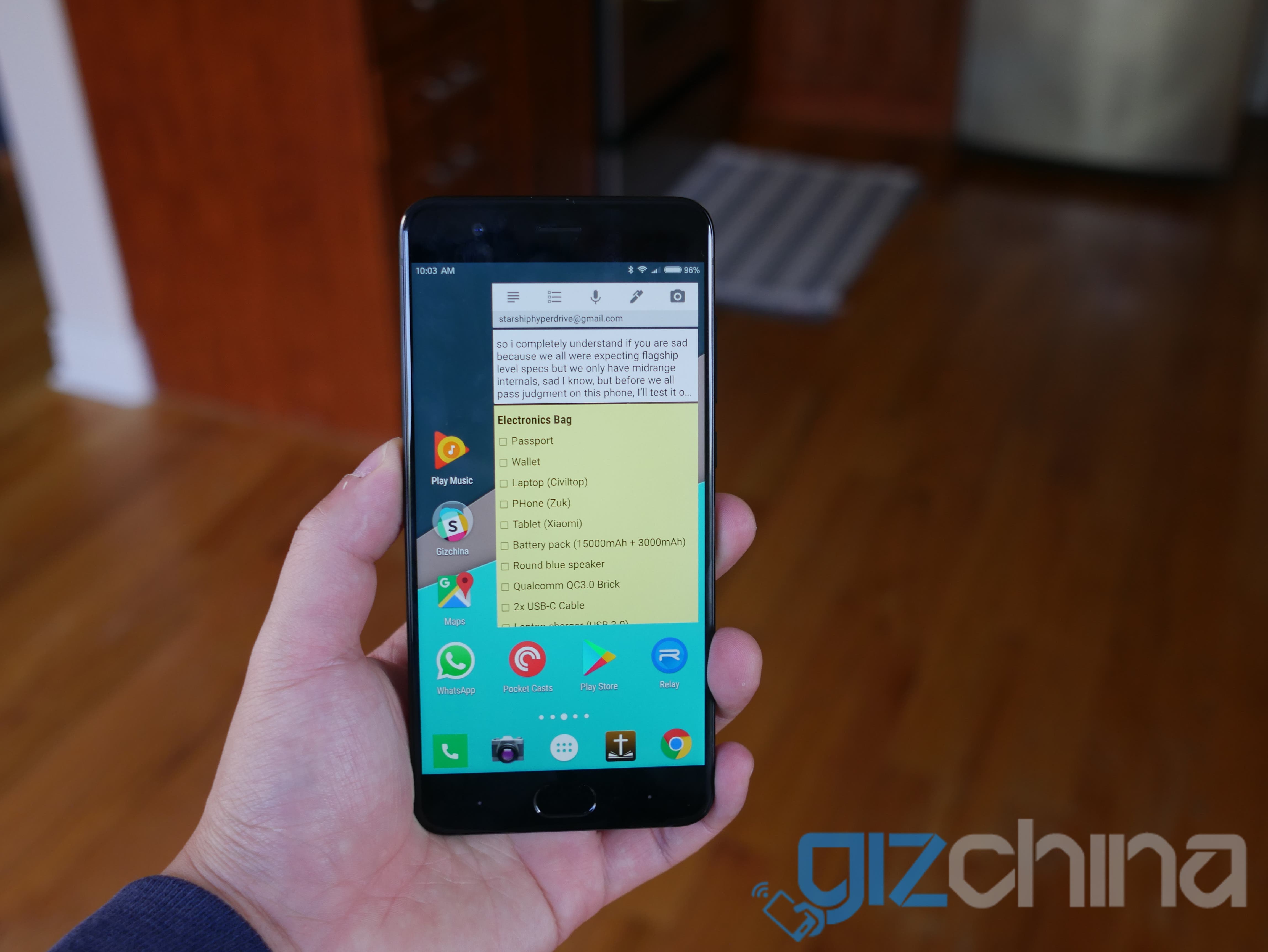 MIUI is a known quantity to those of us who are Gizchina regulars. However, the Mi Note 3 comes with the latest MIUI9 within which comes a few new features, many of which promise to improve the MIUI experience. We all know that MIUI takes a very aggressive app management style, killing apps when you exit them or turn the screen off in order to improve battery life and free up RAM, an annoyance those of us who don’t need this kind of management. Xiaomi has implemented a new “Doze” mode that hibernates apps instead of killing them when your screen is off for a long time, and it definitely works well, no longer requiring an app relaunch every time you turn the phone back on. You can also quick reply to notifications, something MIUI users have been pining for since Android Lollipop was released. Finally, MIUI has promises improved RAM optimization meaning that MIUI uses less RAM and it does deliver on that promise, cutting down RAM use fairly healthily, not that it will affect you on the Mi Note 3 since there are 6GB of RAM. 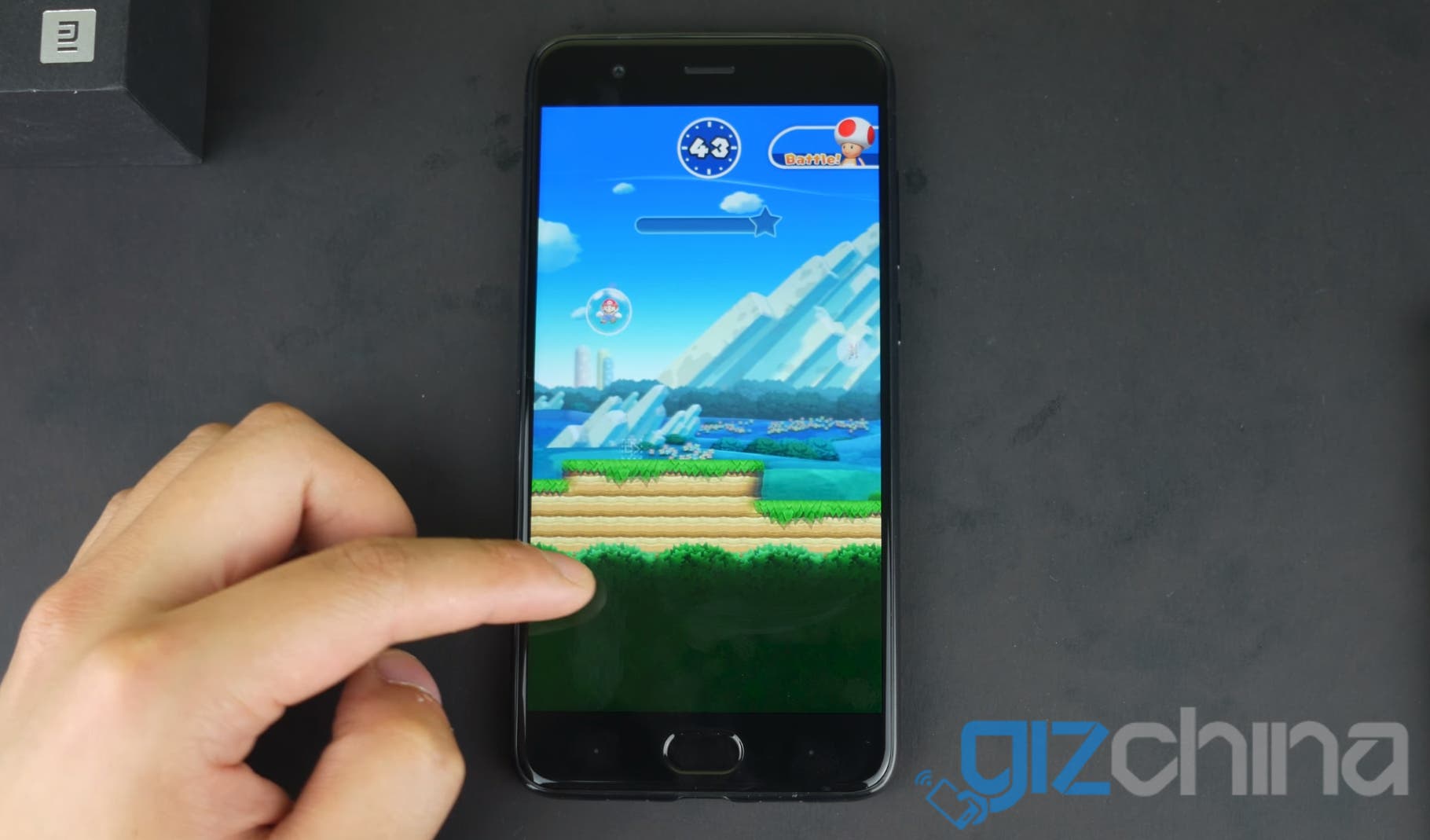 General use is very smooth and very fast, whether I’m navigating through MIUI or using the Nova Launcher. I do detect very slight lag compared to the Xiaomi Mi6, but its imperceptible to those who have not used both. Opening and closing apps is also slightly slower than the Mi6, and this can be seen on video, the Mi Note 3 takes an additional microsecond to open the app. It feels about as fast opening apps as a brand new Snapdragon 821 phone like the Galaxy S7. Multitasking is obviously no problem with 6GB of RAM. Gaming for all intents and purposes is just as fast as the Xiaomi Mi6, with all the intense games playable at the highest settings.

The fingerprint sensor on the front is blazing fast, bordering on instant. It matches the Xiaomi Mi6 and the Oneplus 5 in terms of speed and accuracy. There is also face unlock and while it does work, its slow enough that I don’t use it at all, I turn it off.

I was able to get great reception anywhere I went, even down in Mexico on AT&T, getting 4G LTE everywhere, even a moderately remote construction site. Speeds are blazing fast, even faster than my Zuk Z2, giving me a whole new way to eat my data at unheard of speeds. 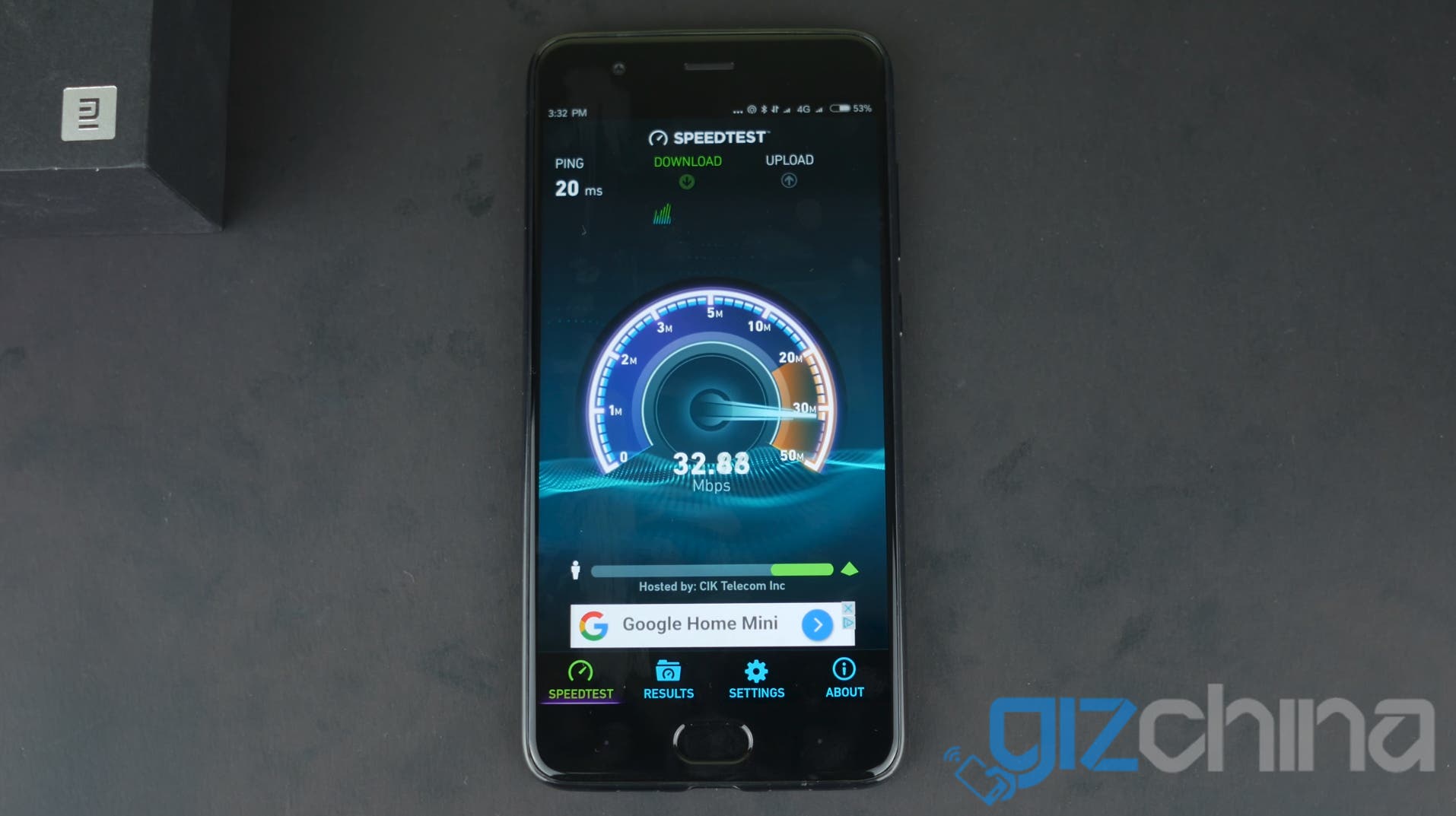 With the removal of the headphone jack, Bluetooth better be good, and it is. I was able to connect to all my Bluetooth devices including a car stereo, two Bluetooth earbuds, a Bluetooth headphone, and a Bluetooth speaker. WiFi signal strength is excellent also. Navigating using the Mi Note 3 is excellent both in Canada and in Mexico.

Specifications wise, the camera module here is rather packed for the now midrange Mi Note 3. It features the exact same setup as the Xiaomi Mi6, a 12MP 27mm wide angle lens and a narrower 12MP 52mm portrait lens, both of which support 4-axis OIS.
The camera app is simple and standard across MIUI devices, with a few added features to support the dual lens; you can switch between the two lenses by switching zoom levels from 1x to 2x. 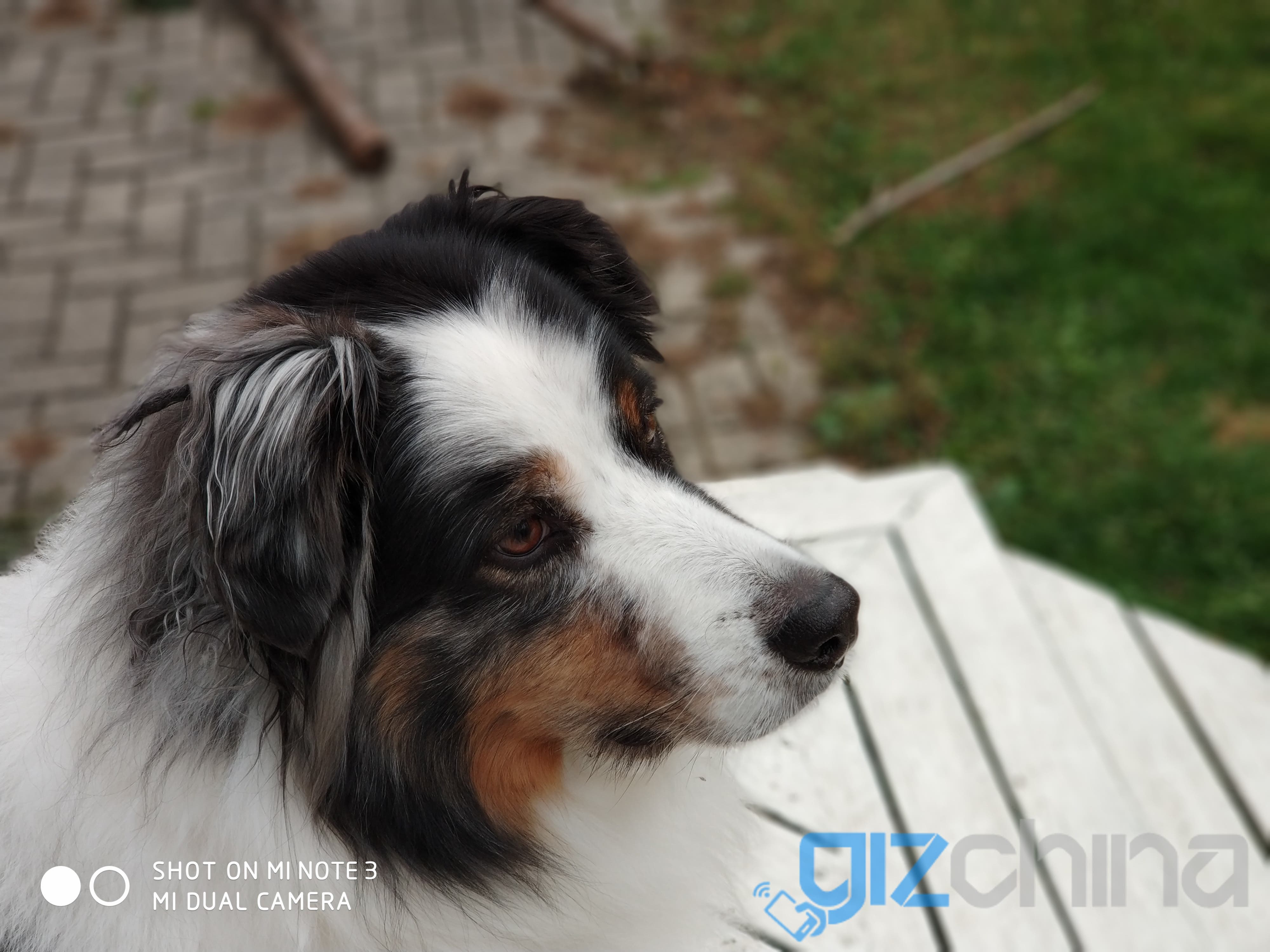 So starting with the 27mm wide angle lens (or 1x zoom in the camera app), the camera captures great looking photos in good lighting conditions. The camera records great exposure and colour saturation, it’s definitely a little oversaturated, but that’s exactly how I like my photos. Detail levels in good lighting conditions are great also, no issues here.
When you switch zoom levels to 2x, you switch over to the 52mm lens and to my eyes, photos in this mode are slightly sharper than what you get on the wide angles. The framing of the 52mm lens is also perfect for taking photos of people as opposed to landscapes. 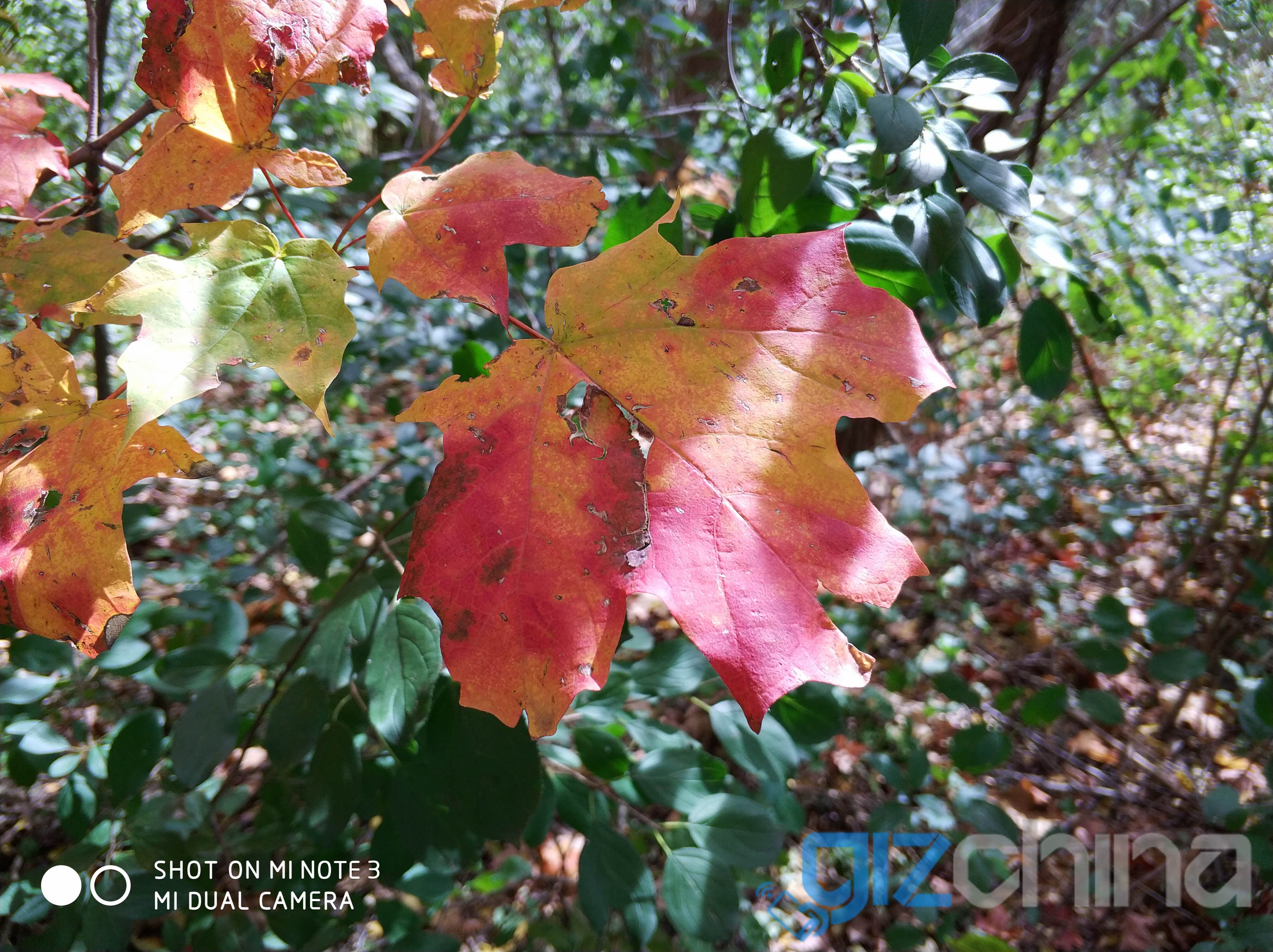 In low light, the 52mm lens (2x zoom) fills with noise a lot faster than the wide angle, which is actually quite capable of taking shots in low light. It balances noise reduction and detail quite well, giving you useable low light shots. 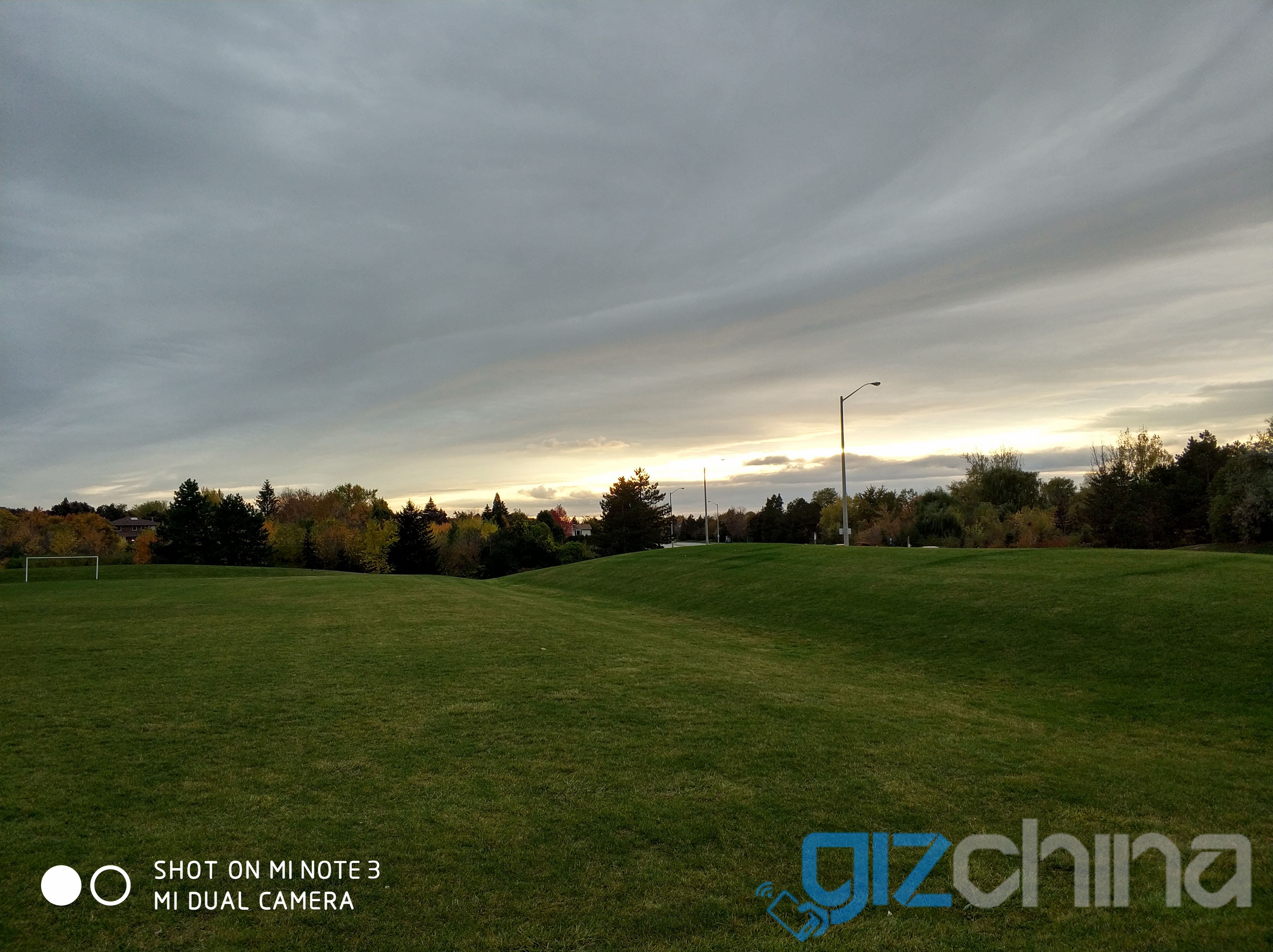 You can turn on HDR and this boosts shadows significantly and even gets your photos even more saturated, even more to my liking!

There is also portrait mode that adds Bokeh to the background, and it does it quite well, separating the subject from the background fairly well, but zooming in will show you the aberrations in the separation. 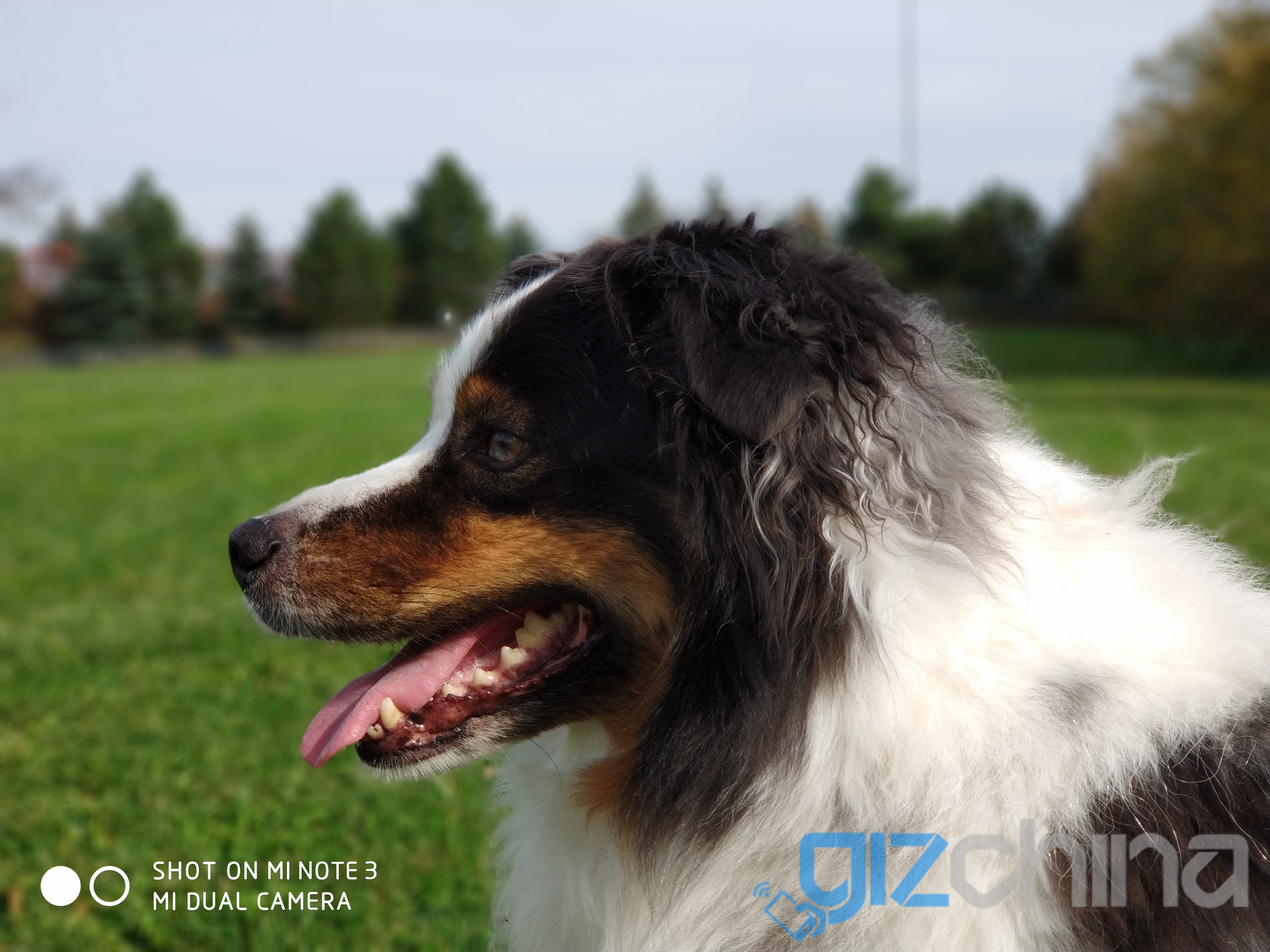 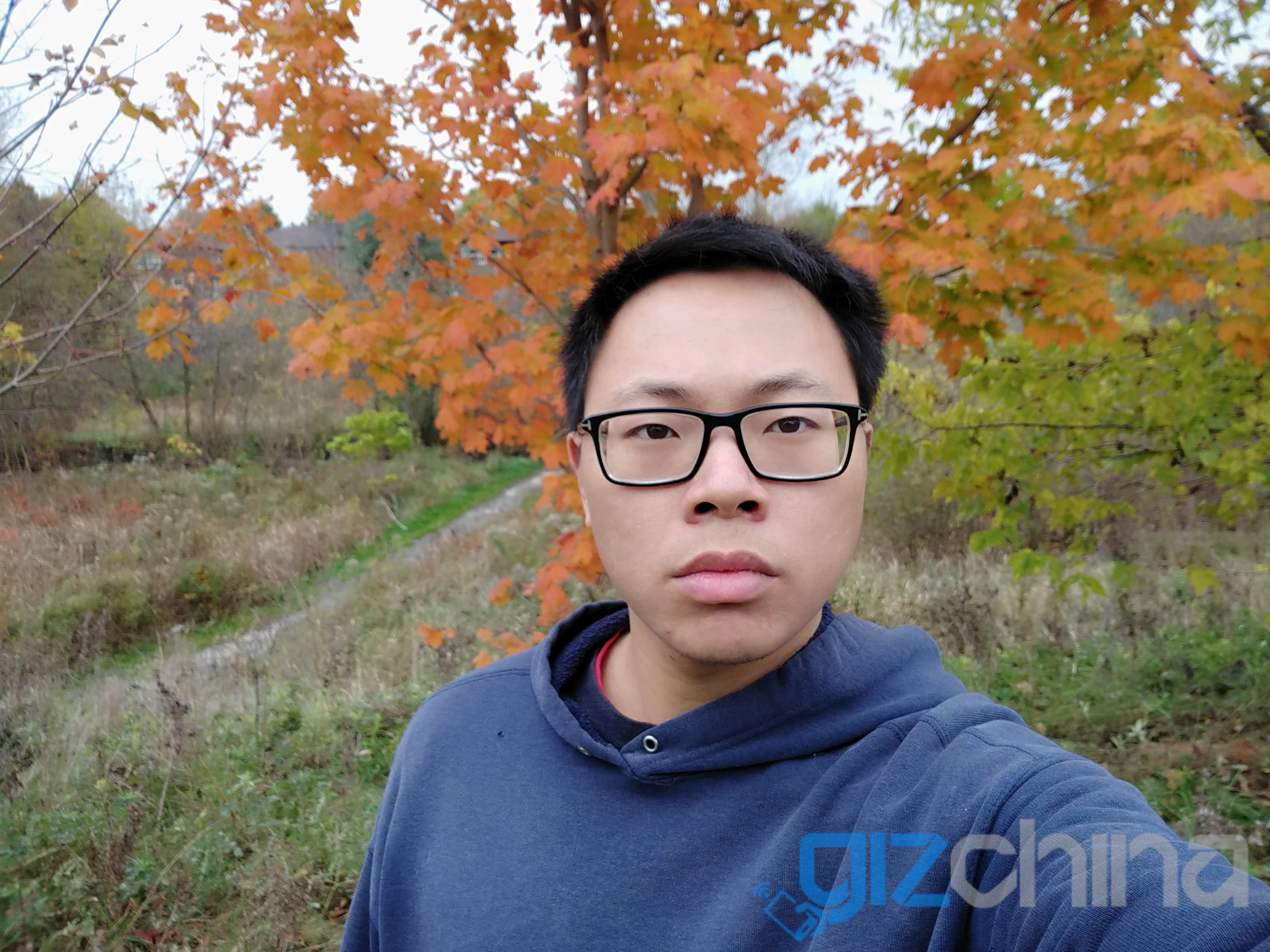 The front facing camera is just about average, but it includes A.I enhanced software to beautify your face, smoothing out wrinkles, removing blemishes and making your face look more like a baby’s (albeit somewhat artificially). I turned it off as most of my selfies include a certain canine, but it does work fairly well in making your face as smooth as a silk.

Moving on to video, the phone captures full 4K video and video detail is great, colour and contrast are both captured well. OIS does its job well in 4K, smoothing out some jitters that naturally arise from handheld shooting.

You can look at the Mi Note 3 from two perspectives. First, it could be a midrange device with a great camera that peeks into flagship level territory with an almost imperceptible performance difference to the more expensive Mi6. Or, it was a flagship device hobbled by the use of the Snapdragon 660 and is now a midrange device with leftover flagship bits. Either way, you’re getting an amazing if somewhat bland device that is great in every aspect. But, and there’s always a but, the high $379USD starting price calls into question the value you are getting with the Mi Note 3, considering the slightly better Xiaomi Mi6 is cheaper than this. A slight upside to the Mi Note 3 are the grey market prices, which usually add a good $70 to such a new product, but in this case, a premium of between $30-40 is applied to those of us outside China.

In a sentence, the Xiaomi Mi Note 3 is a great but overpriced piece of hardware.