Samsung seems to be very well on track to roll out stable builds of Android Oreo for the Galaxy S8. At least, the latest beta tests indicate things are going well. A second update is being pushed out to the Galaxy S8 today in the UK. Other phase one countries will get it soon enough. The first update was when the beta program kick-started with three countries, the UK, the US, and S. Korea. The second phase of beta will include Germany, Spain, France, Poland, India and China. However, we don’t know when the second phase will begin, nor has Samsung declared any dates. 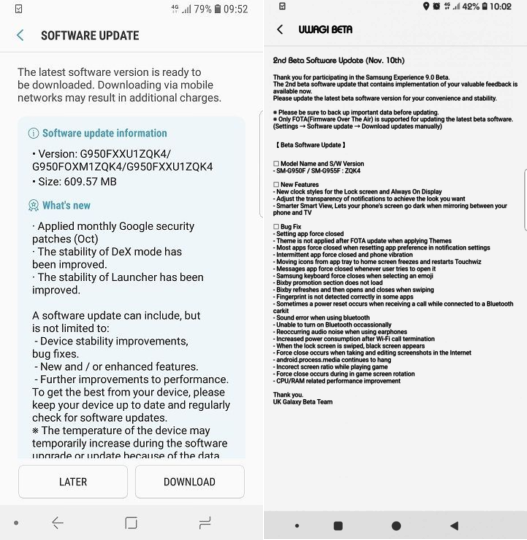 Speaking about the firmware update itself, its got a ton of bug fixes, the October security patch and some stability tweaks. We will point out the major changes below.

The changelog itself mentions that the update weighing 609.57 MB & improves the stability of the Launcher and DeX mode. It is accompanied by the October security patch.  There are a couple of new features as well. Most notable of them are new clock styles for the lock screen and Always On Display. You’ll also now be able to adjust the transparency of notifications with this update. Apart from that, there is a long list of bug fixes in this patch.

In terms of bug fixes, it seems a lot of apps had been force closing on the Galaxy S8. This includes the settings app, Samsung Keyboard, and Messages app under specific circumstances. This beta update addresses those issues. In addition to this, there are bug fixes related to Bixby, Bluetooth, WiFi and some more components. To take a detailed look, check out the images for all the fixes in the changelog.

According to official info from Samsung Turkey, stable Oreo builds for the Galaxy S8 siblings and the Galaxy Note8 should arrive in early 2018.

Previous Another alleged render of OnePlus 5T appear in the wild