The Galaxy S9 is one of the biggest upcoming devices from the South Korean giant. It is expected to launch sometime in the first quarter of 2018, and like we would always have it for most upcoming phones, there has been a steady stream of leaks and rumors in the run-up to the launch.

Recent reports have it that the device will go into mass production later in December, while a separate and most recent one has it that the device could be unveiled ahead of MWC which is billed for February 2018. We know the device will use the latest Exynos or Qualcomm processor, depending on the region you find yourself as it has with the last iteration of the Galaxy S phones.

The latest round of leaks as reported by Tehnocode, reveals the Galaxy S9 front view in full. From the images below, it is crystal clear the Galaxy S9 will feature virtually no bezels on both the right, left sides and even the bottom of the screen. However, slim bezels are visible on the top due to the presence of camera and camera sensors.

The latest leak does, in fact, confirms previous reports which suggested that the device could come with a dual-rear camera similar to that of Note 8 as well as a fingerprint sensor positioned in a position that is far easier to access. 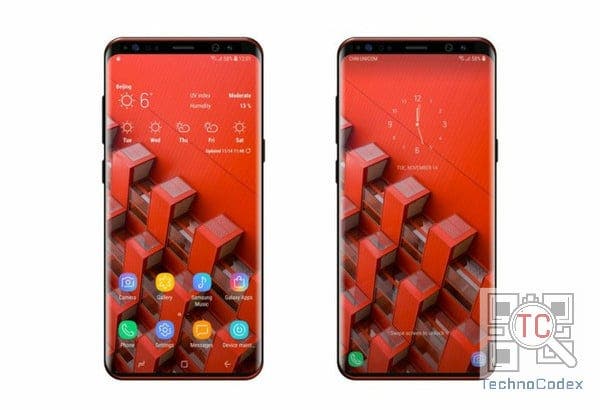 Elsewhere, a new Samsung smartphone dubbed SM-G965F alleged to be the Samsung Galaxy S9+ has popped up on Geekbench revealing some of its core specifications.

Read Also:  Samsung is ready to rewrite the future of smartphones with the Galaxy S22

Next iPhones To Sport Rear 3D Sensor From 2019