Two years ago when a company was going to launch a new device almost the half of that smartphone would remain unknown till the release event. As for now, many things have changed. The Xiaomi Redmi 5 and 5 Plus are going to be uncovered on December 7, but we already know everything about them. Moreover, today the company came in with a new ad video featuring two popular Chinese actors. What’s more amazing they show the phone in the video. So we can even make assumptions concerning their appearance. 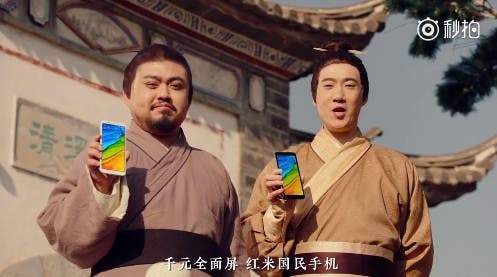 The Xiaomi Redmi 5 and 5 Plus will sport 5.7- and 5.99-inch screens with a resolution of 1440×720 pixels and 2160×1080 pixels, respectively. The lower variant is packed with a Snapdragon 450 chip, while the higher model should come with a Snapdragon 625. There will be various memory combinations including a 2/3/4GB of RAM and 16/32/64GB of internal storage. The battery capacities are different as well. The Xiaomi Redmi 5 is equipped with a 3200mAh battery, while the Redmi 5 Plus sports a 4000mAh battery.

As for the appearance, the lower model’s thickness is 7.7mm, while the higher version comes at 8.05mm. Regardless the trivial differences, both models are very comfortable to hold and implement single-hand operations. The video shows two color options of black and white, but we know they will be launched in four.

The Redmi 5 is priced at 699 yuan ($105), while the starting price of the Redmi 5 Plus is 999 yuan ($150). So with the launch of these models, there will be every chance for Xiaomi to grab the title of the cheapest full-screen smartphones.