Sharp has scheduled a press event for January 16th  in Tapei, Taiwan where the company is expected to unveil its next iteration of the Aquos S series of smartphones featuring a bezel-less display. The company made this known via a teaser image/ press invite it reportedly shared on the Chinese microblogging platform Weibo.

The event set to hold in Tapei will commence at about 14:00 local time and is said to highlight the launch of Sharp Aquos S3 Smartphone with a bezel-free design.

Earlier, the Sharp Aquos S3 was spotted on NCC and Geekbench site where some of its specs were revealed. From the earlier leaks, it is known that the Sharp Aquos S3 will come with a 5.99-inch Full HD+ display with a screen resolution of 2160 x 1080 pixels as well as an 18:9 aspect ratio. As per the GeekBench listing, the Sharp Aquos S3 / Sharp FS8032 will boot Android 8.0 Oreo operating system out of the box and powered by the Qualcomm Snapdragon 630 mobile platform with 4GB of RAM.  Like we mentioned earlier, the device has the same design as the Sharp FS8018, and by implication has a vertical dual rear camera with LED flash and a fingerprint sensor below. 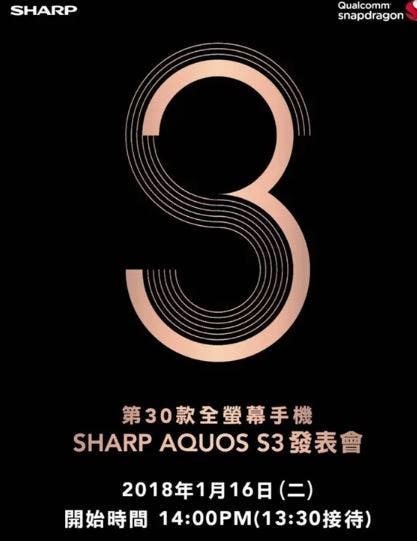 The device will be fueled by a 3,100mAh battery with support for fast charging.

Previous You can now pre-order the Galaxy A8 (2018), shipments begins January 5