Known for its innovative products, Samsung Electronics Worldwide at the  CES 2018  has announced a massive 146-inch 4K TV  which is simply referred to as ” The Wall.” Yeah, it’s as huge as a wall.  The TV is aimed at the  OLED screens that its rival, LG, has long-touted as the best screens on the market.

Do not mistake the Wall for just another big looking TV, the Wall has a display technology that is entirely different from what we are all used to. It uses a  MicroLED display panel with micrometer scale LEDs that are much smaller than existing LEDs – the first in any consumer TV.

Aside from the ease of making MicroLED panels, the new panel is thinner and is known to offer deep blacks and high contrast ratios like OLED panels.

Referred to by the maker as the world’s first “modular TV”, the Wall can be merged up with other units to create a larger screen, without any adverse effect on performance. Samsung says as many new screens can be synced with the wall, but fail to clear the air on how many screens can be synced up. 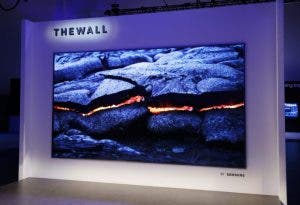 To negate the non-availability of content for 8K resolution, Samsung has now crammed the Wall with an AI upscaling technology that can purportedly improve the quality of standard definition content to 8K resolution.

There’s no official word on pricing, but we are pretty sure it will cost a fortune when it becomes available later in the year.

Next Cubot Valentine's Day Promo Up on their Official AliExpress Store