China is the largest market in the world. That’s why if you are not presented in this market, most likely you will yield the most of manufacturers. Moreover, this is the reason why many Chinese manufacturers prefer to be second-league players in China rather enter other markets such as Indian, European, and American. So the data coming from this region may tell too much about the trends. Say, a quick look at the list of bestselling smartphones of 2017 in China showcases that Apple and Samsung are not as popular there as in other markets. This simply means the marketing campaign they implement doesn’t play any role here. 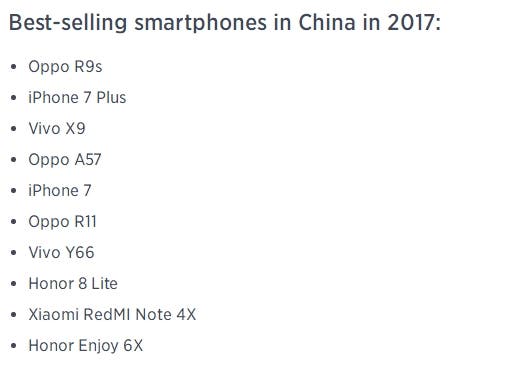 According to Counterpointresearch, the most selling smartphone in China is the OPPO R9s. This is a great phone that looks like the iPhone but comes with hardware more accepted by Chinese customers. OPPO flagships have always been packed with super mid-range chips made by Qualcomm. So the OPPO R9s does.

It’s followed by the iPhone 7 Plus and VIVO X9. You won’t believe, but there is no Samsung smartphone in the top ten of bestselling smartphones in China. The fourth and fifth places are occupied by the OPPO A57 and iPhone 7, respectively. 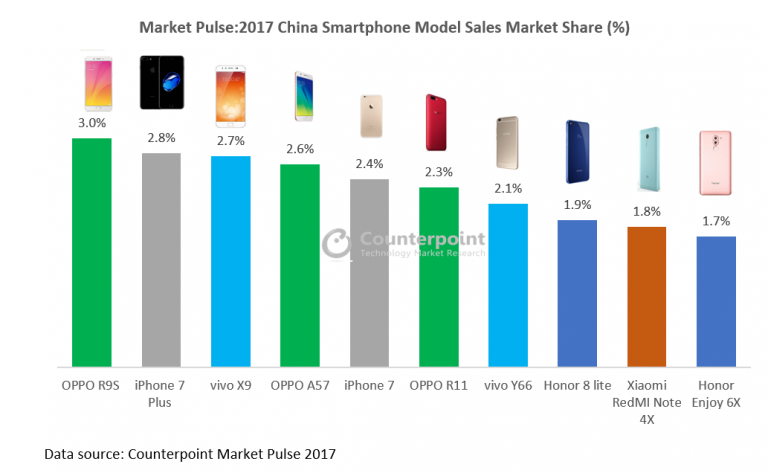 What surprised us much is there is only one Xiaomi smartphone, and it’s the Redmi Note 4X. This is the first smartphone of Xiaomi launched in 2017, and it belongs to the mid-range category. So there is no representative from the Mi line. Even Huawei has two representatives in face of the Honor 8 Lite and Enjoy 6X. At last, the list includes the OPPO R11 and VIVO Y66.

As you see, the most of these devices are considered to be thousand-yuan smartphones. That’s why they sold the most. As the source claims, any smartphone that appeared on the list should provide at least 1 million sales monthly.