On February 14, Xiaomi announced two new thousand-yuan machines in New Delhi, India. The Xiaomi Redmi Note 5 and Xiaomi Redmi Note 5 Pro were uncovered as first full-screen mid-range handsets of the manufacturer. Especially, the Redmi Note 5 Pro was in the spotlight, because the Note 5 variant is the same Redmi 5 Plus. Since the day they’ve been announced many Mi fans are wondering when it will debut in China. Today some information concerning this event appeared on the net. And seems it will have an improved camera in comparison to the original model. 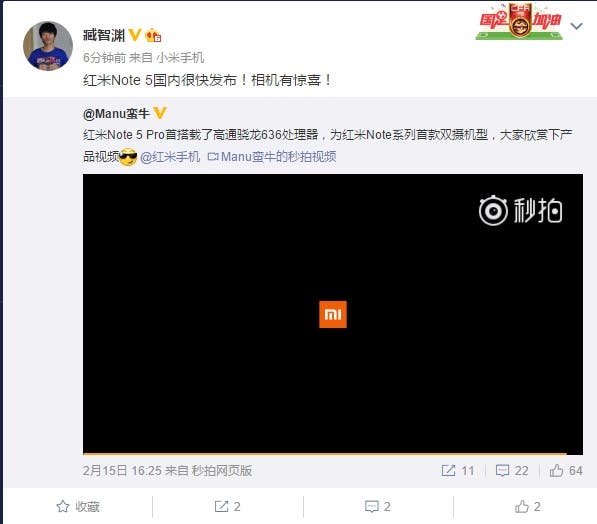 Today, Xiaomi mobile marketing director posted via the official Weibo account that the Xiaomi Redmi Note 5 Pro will be released in China soon, but the specs and the camera will differ a lot.

As for the regular version, the Xiaomi Redmi Note 5 Pro (that is assumed to be renamed to the Xiaomi Redmi Note 5) comes with a metal unibody using a traditional three-stage antenna design. The dual-camera module is placed vertically on the back. There are four color options to choose from – gold, rose gold, blue, and black.