The Xiaomi Mi Mix 2S has been hot topic for quite a while now. Xiaomi has been doing its bit to fuel the speculations by posting teasers. A few hours ago, Xiaomi took to Weibo and posted a teaser revealing the official launch date of the Mi Mix 2S. 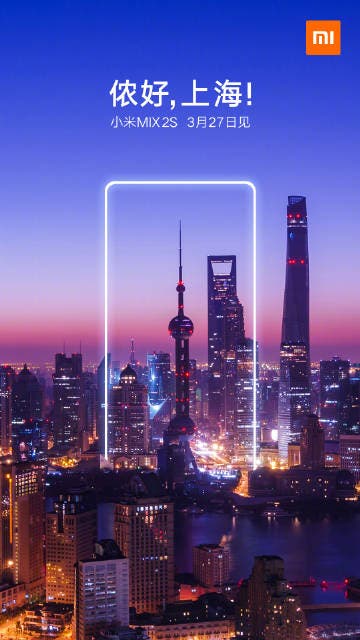 The poster reveals the official date alongside the already known fact about the bezel-less design. The Mix 2S will see the light of day on the 27th of March, which is two weeks away. Yesterday, there were reports that the Mi Mix 2S will sport a dual camera setup, the sensors of which will be working independently, the applications of which elude me.

There was another teaser that Xiaomi posted boasting of the AI support the Mix 2S’ camera will have. AI support for camera seems to be the gimmick for 2018 after 2017 was ruled by full screen displays and dual cameras, with some manufacturers going as far to integrate a dual front and back cameras on their phones. To round up all the rumors, the Mix 2S is expected to sport the flagship of 2018, Qualcomm Snapdragon 845 alongside 6/8GB of RAM. The possibility of an under display fingerprint scanner seems bleak thanks to a report that showed the fingerprint scanner at the back. Cryptic teasers and leaks are what we have on hand till now, so stay tuned for more!