US biggest carriers such as T-mobile, Verizon, and AT&T have distant themselves from Chinese smartphone manufacturer, Huawei, due to pressure from the US government. The government believes that Huawei has a strong political tie with the Chinese government which could threaten the national security of the United States. Back in February, Huawei Mate SE which is just a slight modification of the 7X was quietly launched in the US and a few days ago, the smartphone became officially available via Amazon and Best Buy for $229. 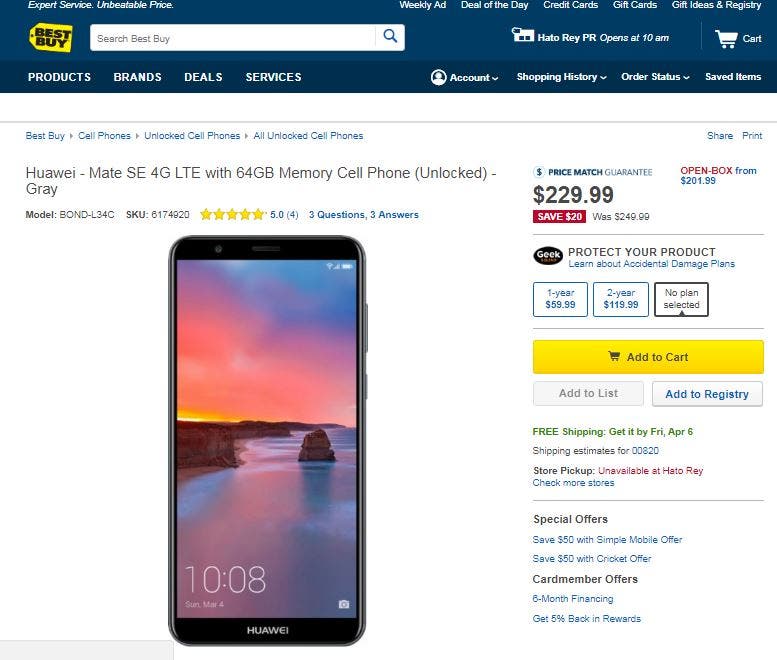 However, the U.S. government surprisingly reacted to its availability and it re-warned the U.S. citizens who are prepared to purchase the mobile phone to think twice. Last month, the Central Intelligence Agency (CIA), Federal Bureau of Investigation (FBI), National Security Agency (NSA) and the National Intelligence Director of the United States stated that Americans should not purchase Huawei and ZTE  smartphones due to perceived strong ties with the Chinese government. FBI Director Chris Rey even stated at the Senate Intelligence Committee hearing that

“Any US company or entity that uses products from certain countries that difer from ours is bound to pose a risk to the safety of US telecommunications networks. We are very worried.”

He further implied that Chinese smartphones can access and even control the U.S. telecommunications system, and thus maliciously steal or tamper with information or engage in espionage activities. On its part, Huawei has denied any knowledge of wrongdoing

“Huawei is aware of a range of U.S. government activities seemingly aimed at inhibiting Huawei’s business in the U.S. market,”…”Huawei is trusted by governments and customers in 170 countries worldwide and poses no greater cybersecurity risk than any ICT vendor, sharing as we do common global supply chains and production capabilities.”

This current brawl between Huawei and the US government has generated mixed reactions from smartphone users. While some people believe that US citizens should stay away from Huawei phones, others have called on the US government to stop involving the ordinary American in its “personal” issues with some Chinese brands.

Previous Infinix Zero 5 With A Number of Selling Points at $222.48 [Coupon]

Next Preorders open for Xperia XZ2 and XZ2 Compact in Europe