The Meizu Pro 7 that launched in China way back last year has finally landed in India. The handset will be sold on Amazon exclusively with a price tag of Rs 22,999 ($354). There’s no talk about the Pro 7 Plus sales which is the more powerful variant of the Pro 7.

The Pro 7 duo are both known mainly for their dual displays. Yes, they feature 1.9-inch secondary displays on the rear besides the big display on the front of the phone. Although the small display is AMOLED, being so small makes it more like a ticker display. As for the front, the Meizu Pro 7 has a 5.2-inch Full HD display. Beneath it lies the signature mBack button of Meizu and the screen aspect ratio is 16:9. 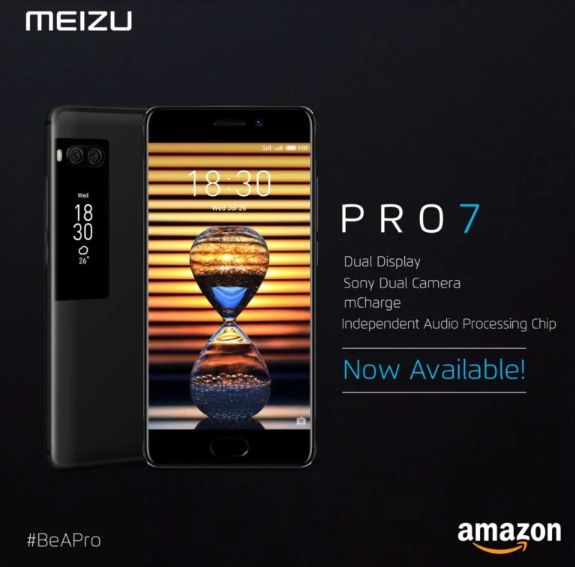 As for the other hardware vitals, the handset is powered by a MediaTek Helio P25 SoC assisted by the Mali-T880 GPU. The handset comes with 4GB of RAM and 64GB of internal storage which is expandable.

For optics, there are dual 12MP shooters sitting on top of the secondary display with a dual LED Flash. The front has a single 16MP snapper with f/2.0 aperture. The Meizu Pro 7 also boasts 4G VoLTE, USB Type-C and mCharge. Further, the handset runs sadly on Android Nougat drawing power from a 3,000mAh battery.