Today, Meizu Technology officially announced that the Meizu 15 series flagship had been sold out in the omnichannel in about 45 minutes. The company commenced another batch of sales at 10:00 (Chinese Time) on April 29 but the details of that sale is not known as at the time of this report. The Meizu 15 series was used to celebrate the company’s 15th anniversary and it was created by Huang Zhang, the founder of Meizu. The Meizu 15 uses a standard 16:9 screen and at the same time, it comes with ultra-thin bezels. The screen BM area is basically not visible under the front glass cover. 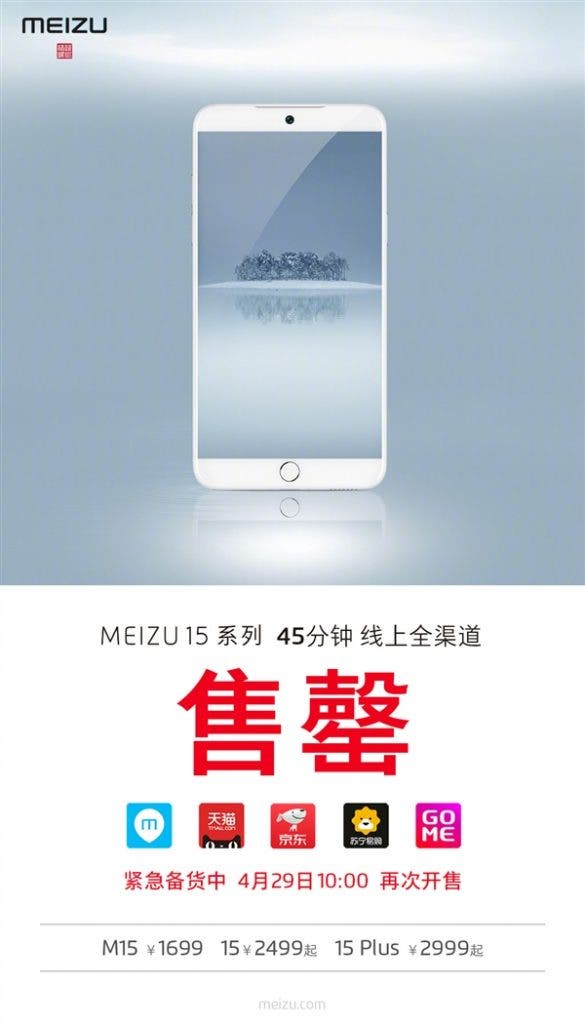 Meizu 15 uses a 5.46-inch 1080P display, it is equipped with a Qualcomm Snapdragon 660 processor coupled with 4GB of RAM and 64GB of internal storage. It also has 128GB storage variant. In the camera department, this smartphone has a dual rear with 12MP + 20MP which are supported by a 20MP selfie snapper. Its lights are kept on by an average 3000 mAh battery.

Meizu 15 Plus uses a 5.95-inch 2K display, equipped with Exynos 8895 processor, and 6GB of RAM. The storage options and camera system and exactly the same as the Meizu 15 but the lights of this smartphone are kept on by a 3500 mAh battery.

In addition, Meizu 15 series also has a Meizu M15 Lite, which uses a 5.46-inch 1080P display and it is equipped with Qualcomm Snapdragon 626 processor coupled with 4GB of RAM an 64GB of internal storage. Its camera and battery are similar to Meizu 15.

Previous Huawei Seek To Replace Android - Developing Its Own OS

Next Redmi S2 to launch in Czech Republic, Vietnam, video and pricing surfaces