A new Blackberry smartphone which currently bears the model number ‘BBG100-1 ’ has now been spotted on the Geekbench site, following the recent confirmation that the Key 2 should touch the ground on June 7. As is typically the case with such listings, the benchmark only reveals a few details of the device.

The listing reveals that the’BBG100-1 ’ will boot Android 8.1 Oreo OS out of the box loaded with 4GB RAM, while Qualcomm octa-core Snapdragon 625 SoC processor (clocking at 1.8 GHz) along with an unknown GPU will be powering the device.

We are immediately sure what the ‘BBG100-1 ’ could be, but there are those that believe the recently benchmarked device could be a Lite variant of the upcoming Blackberry Key 2, while others think it could be the second QWERTY keyboard touting BlackBerry device that’s billed to be unveiled later this year. In either case, we think the  ‘BBG100-1 ’ looks set to be unveiled as an affordable QWERTY keyboard touting BlackBerry smartphone.

We expect to see more of the BBG100-1 specs, including the specific name in the days leading to June 7. 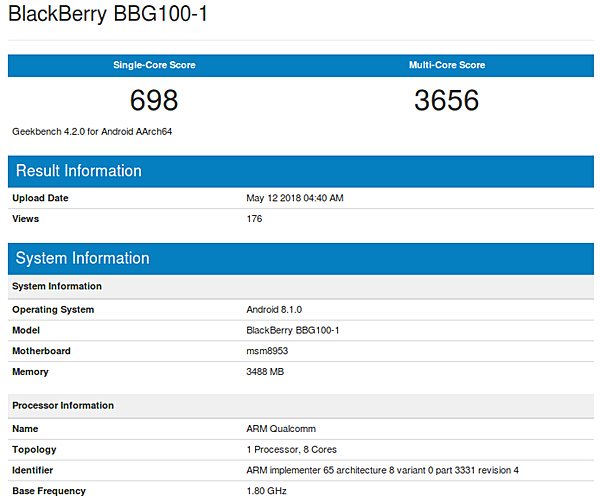 To recall, the Blackberry Key2, whose launch event has now been confirmed for June 7,  only recently appeared on the Wi-Fi and Bluetooth SIG site for approval, where it was revealed that the device will come in three different variants with model number BBF100-6, BBF100-2, and BBF100-1, while the Bluetooth SIG suggests it will ship with Android 8.0 Oreo out of the box as well as supports Wi-Fi networks running on both the 2.4GHz and the 5GHz frequencies.

Previous Razer schedules launch event for May 22 in China