Its no more news that HMD Global will be reviving its old Nokia X series with the release of the notched Nokia X6, which is expected to debut in a few hours from now. Lately, in the days leading to today, we have been coming across leaks and renders related to the upcoming device dubbed Nokia X6, but now, we have more evidence to cement some of the previously leaked specs.

The device has been spotted on the GeekBench benchmarking website confirming a few of its specifications. On the listing, the device is listed as HMD Global Nokia X6, so that puts an end to the real moniker of the device.

As per the listing, the device will be powered by the Qualcomm Snapdragon 636 octa-core SoC, coupled with 6GB of RAM on the inside, but as revealed by the listing on TENAA,  we are likely to see cheaper 4 GB and even 3 GB RAM options. The listing also revealed the Nokia X6 will come pre-installed with Android 8.1 Oreo. In terms of performance, the device might be a good contender of the Xiaomi Redmi Note 5 pro having pulled a total of 1332 points in the single-core test on Geekbench, and 4892 in the multi-core test. That is about all the info we can extract from the GeekBench listing, but we have a handful of expected specs, renders and teasers of the upcoming Nokia X6 here. 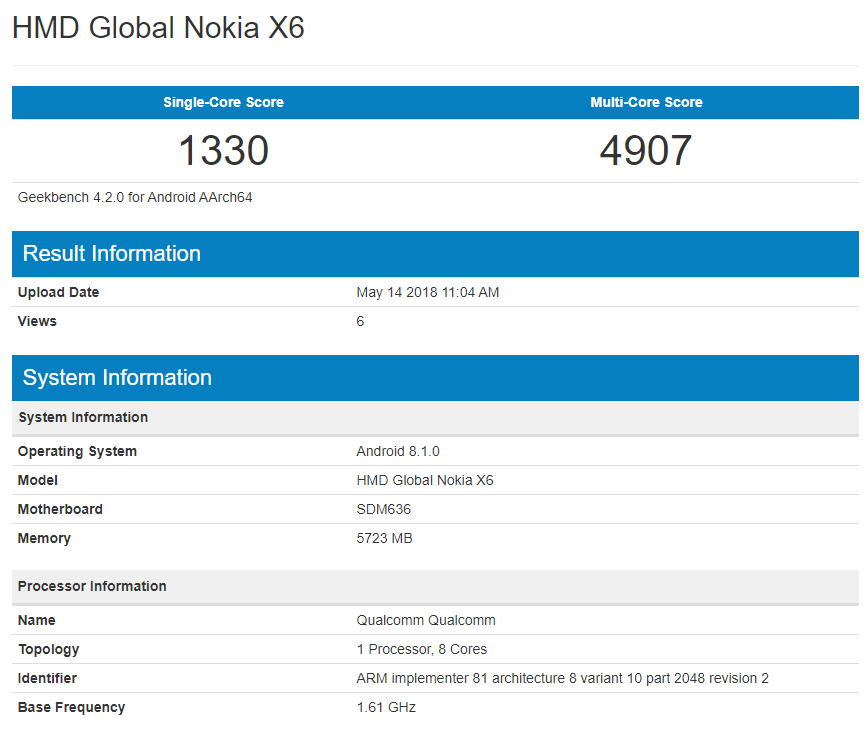 Earlier reports had revealed the device has been listed on the Chinese retailer Suning with a starting price of  CNY 1,499, which amounts to about $237 for the 3GB. Pricing details, as well as availability for key markets, will be revealed at launch.