On May 15, Chinese manufacturing giant, Huawei, released its Honor 10 smartphone in London and unofficial sale reports from France and Spain suggests that this smartphone is doing quite well. Today, Honor’s president, Zhao Ming, shared an image that was purportedly taken with the Honor 10 at the peak of Mount Everest which is about -30 degrees cold. The athlete is part of the Everest Climbing Team of Peking University and when they arrived at the peak of Mount Everest (the highest mountain in the world) he reportedly used the Honor 10 to get a snapshot of himself holding a jersey of his idol and Argentina’s football sensation, Lionel Messi. The image is quite impressive for such environmental condition because it has a lot of details. In sharing this image, Mr. Zhang is trying to portray the performance of the Honor 10 even at extreme temperatures. However, there are some unanswered questions. 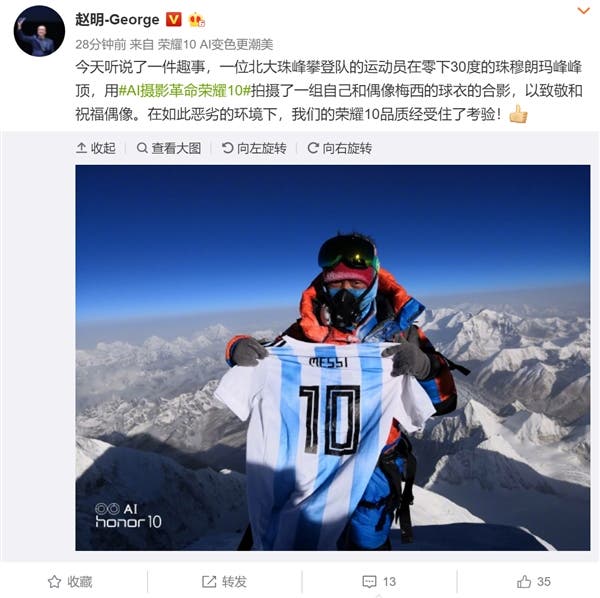 According to ChinaDaily, the Mount Everest climbing team from Peking University left for this expedition on March 31 and arrived at Qomolangma’s north base camp (Everest Base) on April 9 which is ten days before the Honor 10 was first launched in China on April 19. The team reached the summit of the mountain three days ago, the same day that the Honor 10 was launched globally (It takes at least seven weeks to climb Mt. Everest). This leaves us with the question “How did the student get the Honor 10?”. “Was this unreleased smartphone given to him by the company before launch?” or “Is this just some hoax by Mr. Zhang?”. We are all aware that manufacturers are very careful with its unreleased smartphones to prevent leaks from getting out early.

If this is true and somehow this student got his hands on the Honor 10 prior to launch, then this smartphone is quite impressive, to say the least, but we have our reservations about this news. If you have answers to any of the questions raised above, let us know in the comment.

Next Xiaomi Mi Box Selling at just $59 on Lightinthebox