Earlier on this month the Galaxy Note 9 was benchmarked on the popular benchmark application and database, the Geekbench. However the newest Samsung’s king of phablets was spotted only in its Qualcomm Snapdragon flavored version, today a new leak reveals the GeekBench results achieved by the Exynos 9810 powered Galaxy Note 9. 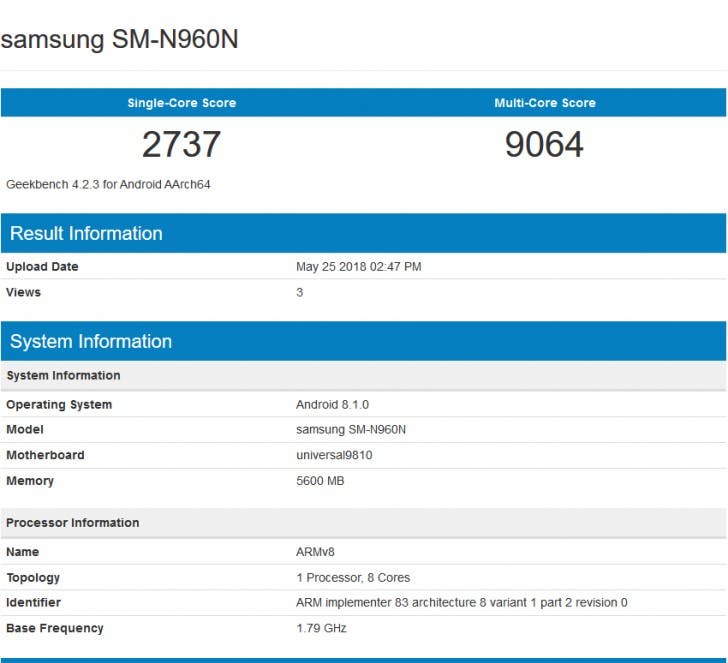 This new model was spotted with the unreleased in-house made Exynos 9810 Octa-core chipset paired with 6GB of RAM. According to a number of reports from Galaxy users, the Exynos variants have a long tradition of running the Samsung UI much more smoother than the Snapdragon variants, this can be justified by the fact that Samsung can easily adapt its software to run perfectly on its own hardware, similar what Apple does with the iPhone and iOS integration.

Anyway, if we compare the results of both leaks, The Snapdragon 845 Galaxy Note 9 achieved 2190 points in the Single Core test and 8806 in the Multi-Core test. Meanwhile, the more recent benchmark with Exynos 9810 scored 2737 in Single Core and 9064 in the Multi-Core test. Worth noting that both benchmarks were run with a 6GB RAM variant of Galaxy Note 9, leaving us to speculate that could be the minimum RAM variant available for the smartphone.

The Galaxy Note 9 massive leaks haven’t come out from the hiding yet, however, according to speculations the smartphone will feature a larger display with 6.4-inch vs the 6.3-inch from its predecessor. There also talks pointing to a larger battery and a new version of Samsung’s smart assistant – Bixby. Furthermore, the smartphone main difference in design will be the replacement of the fingerprint sensor placement to a vertically aligned and more ergonomic setup.

Next OxygenOS 5.0.3 arrives OnePlus 3 and 3T with Face Unlock and May Security Patch