June is shaping up to be a big month for Xiaomi as the company’s Xiaomi Mi 8 will go for sale after launch on May 31st. However, there are other smartphone launches following in June. Specifically speaking, the Redmi S2 that was officially revealed this month dons the colours of the Redmi Y series and launches in India. Xiaomi has issued invites for a June 7th event in the country. And although, nothing is set in stone, there are obvious clues that the Redmi Y2 will launch at the event.

Speaking of which, the handset has appeared on Geekbench. Not that we don’t know anything about the handset but this also lends weight to the Redmi Y3 moniker. As for the listing itself, this particular model has Android 8.1.0 on board supplemented by a 2.02 GHz processor. No guessing games here as we know the Redmi S2 is powered by a Snapdragon 625 SoC. The list also shows 3GB of RAM on the device. 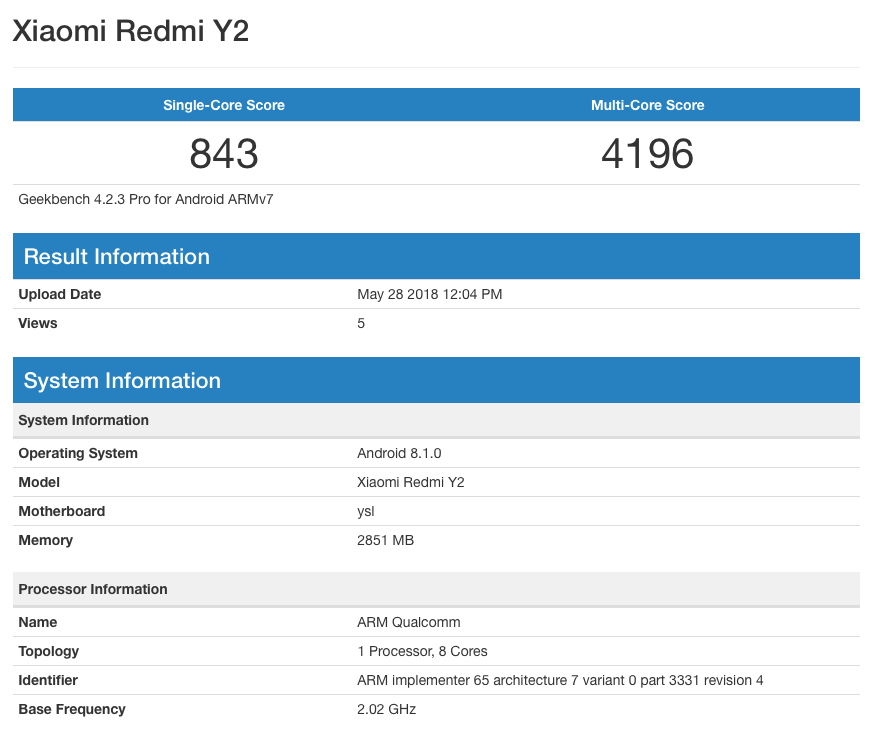 As for the other components, the rebranded S2 will sport a 5.99-inch HD+ display with 2.5D curved glass protection. The series has been conceptualized to cater specifically to the shutterbugs. Hence, it features dual rear cameras with a duo of 12MP + 5MP arrangement. The front also gets some love with a strong 16MP sensor at a very low price.

The Redmi Y2 launches on June 7th and it should be priced similarly to the Redmi S2 i.e. around the Rs 9,000 mark in India.