If you still care about Android tablets then you may want to protect yourself from an imminent heartbreak. Recently, Google updated its Android web homepage but the obvious change made was the removal of the Tablets category. At present, there are five categories which include Phones, Wear, TV, Auto, and Enterprise. Attempts made to get information on tablets by searching for “tablets” returns you back to the homepage.

Most recently, we have seen the introduction of tabs like NVIDIA Shield Tablet K1, Samsung Galaxy Tab S2, and other products. However, it now appears that they will be the last of it. In fact, Google’s disposal of tablet products can be seen from the fact that Android P does not open a beta upgrade to tablet devices. There is a growing popularity of large-screen smartphones so it becomes a bit difficult for tabs to thrive because the large display is the only thing its got. 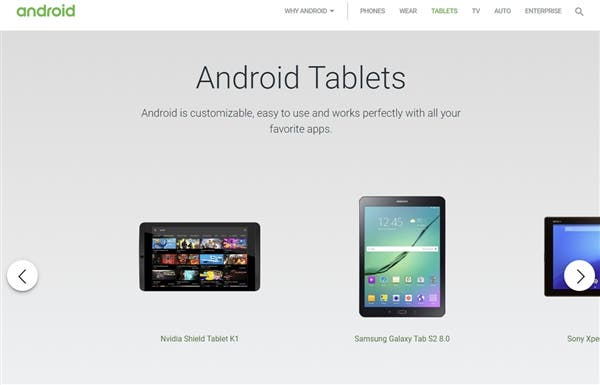 Recent reports have it that tablet sales hit a record low last quarter as it shipped only 33 million units. As of now, there are still some OEMs like Huawei, Samsung, Xiaomi, and others who are scheduled to launch new Android tablets or developers that have not abandoned development.

Next Costly Samsung Galaxy A9 Star, A9 Star Lite now on pre-order in China