The Samsung Galaxy J7 Aero made an appearance on Geekbench under the moniker SM-J337V. folks on the web managed to document a screenshot just before the listing was pulled down. 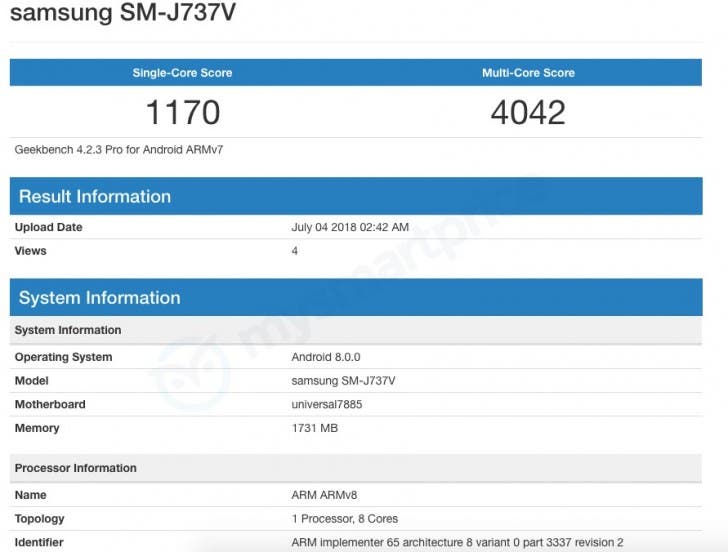 The SM-J337V is expected to be a Verizon exclusive smartphone slated to launch in the US soon. The Geekbench listing details a few specifications of the rumoured handset. The J7 Aero will be powered by the Samsung Exynos 7885 coupled with 2GB of RAM. The benchmark was performed on a device running Android 8.0 Oreo. It scores 1170 points in the single-core and 4042 points in the multi-core tests. While a listing on Geekbench does usually detail the correct specifications, there is no telling whether this would be the only variant of the smartphone.

Judging from the processor and RAM configuration the Samsung Galaxy J7 Aero will fall under the affordable to mid-range category. The J7 Aero is probably a re-branded version of the Galaxy J7 which was announced last month. If that really is the case, then the J7 Aero will sport a 5.5-inch Super AMOLED display with a 720p resolution and 16:9 aspect ratio, 13 MP snappers both on the front and the back. The re-branding might be a part of the carrier dependency the handset is supposed to arrive with.

Next Xiaomi to Focus on User needs while Designing MIUI 11