On May 31, along with the new annual flagship of Xiaomi, the manufacturer also uncovered a new smartband. After two years since the launch of the second-gen Xiaomi Mi Band 2, we saw an overhauled model named the Xiaomi Mi Band 3. While many were thinking nothing changed and both models adopt the same detachable body + strap design, there were real differences between the two. Moreover, the company continues working on improvements. The first update was pushed to users on June 19. It allowed muting the device. Now there is an official confirmation a new feature is on the way. And it is called ‘night mode.’

Note: Actually, it doesn’t say the Mi Band 3 will get this function, but there is every reason to think the Night Mode new feature will come to the current model first.

Actually, the Xiaomi Mi Band 3 comes with a larger screen, which also supports touch operations. As you remember, for the previous model, it was possible to interact with the band only through the command button on the screen and via the Mi Sports app. This simply means the new screen will allow the manufacturer to develop more advanced features and bring them to the final users. Unfortunately, the company didn’t disclose whether the night mode feature will refer to the Mi Band 3 only or other Mi bands as well. 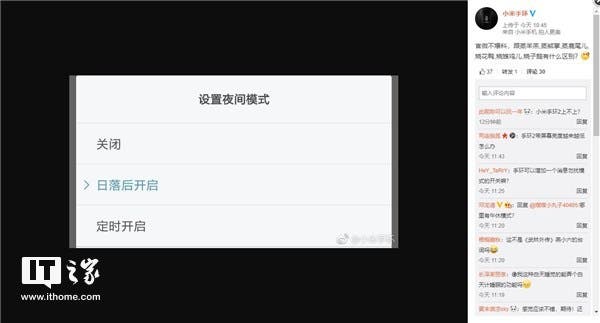 At the same time, the lack of information makes us come in with assumptions ourselves. First, the night mode will allow the smartband to work in two options. One of them should activate after the sunset, while the second one will take over after the sunrise. Second, this should help the Xiaomi Mi Band 3 (and other smartbands) to adjust the screen brightness automatically to optimize the visualization under different light intensities. In addition, it is also possible to perform a function adjustment based on this function to achieve the effect of optimizing endurance.