Chinese manufacturer, ZTE, commenced trading earlier today for the first time after the ban was lifted. The company which has seen its shares drop to low levels in the past weeks now has cause to smile as its A and H shares rose sharply on its first post-ban trading day. Its H shares rose as much as 16% to HK$15.94 ($2.03). 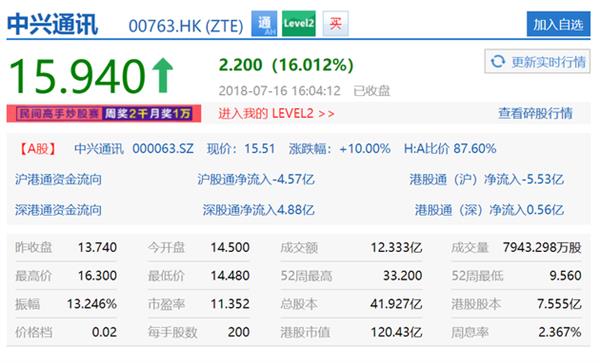 ZTE announced on the evening of July 15 that the US Department of Commerce’s Bureau of Industrial Security (BIS) had terminated the refusal order imposed on the company on April 15, 2018, and it removed ZTE from the list of banned exporters. ZTE was previously issued a seven-year ban by the US authorities. This ban prohibits ZTE from purchasing all electronic products and related software and service products from the United States, causing ZTE to suspend production for several months. The company subsequently halted production as well as trading and its 80,000 employees were at risk of losing their jobs.

On the evening of June 12, ZTE announced that the US Department of Commerce had reached an agreement with the company which requires ZTE to pay a total of $1.4 billion in civil fines.

Next LG V30 Plus In India Gets Android Oreo Update