Previously, it was reported the next flagship of Meizu will debut on August 8. On July 30, the manufacturer confirmed this by sending out the conference invitations. Meizu has always been playing tricks with its launch “ceremony.” However, what we know about the upcoming Meizu flagship (Meizu 16) is that it will be arriving with 6GB of RAM as per its previous TENAA and Geekbench listing. Now, another variant of the Meizu 16 with 8GB of RAM just appeared on Geekbench but this will probably be a limited edition. 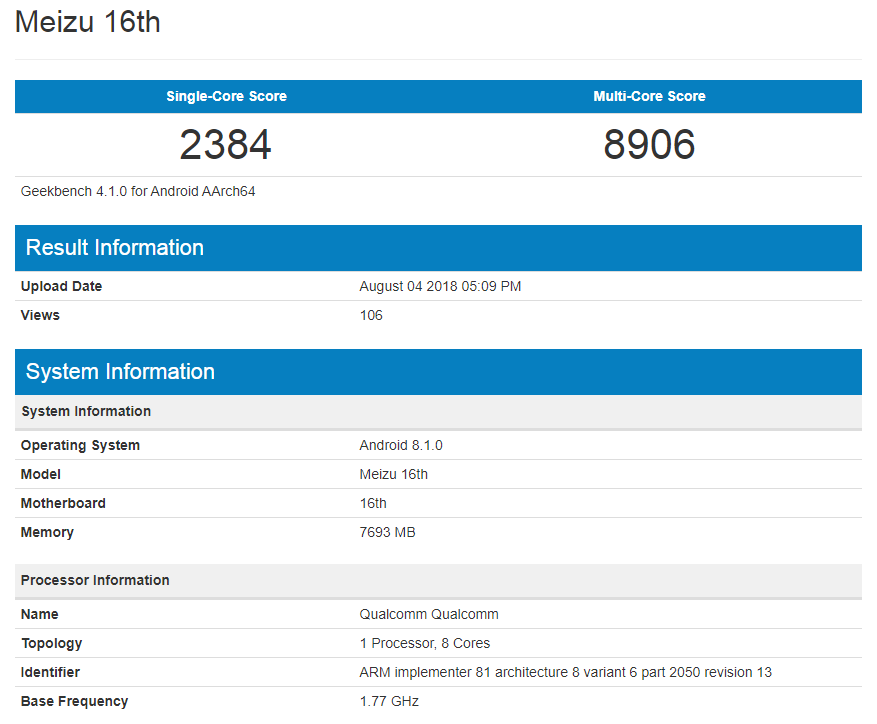 According to the GeekBench screenshot, the Meizu 16 will be packed with a Snapdragon 845. That’s why it scores 2384 and 8906 in the single-core and multi-core tests, respectively. This is a common result for smartphones sporting an SND845. According to the previous TENAA document, the Meizu 16 sports a 6.0-inch 18:9 AMOLED screen with a resolution of 2160×1080. Apart from the SND845 version, there will be the Snapdragon 710 variant like the Xiaomi Mi 8 and the VIVO NEX. It will be packed with a battery of 3010mAh capacity, while the SND845-powered version will come with a 3640mAh battery. Both models will support an on-screen fingerprint recognition.

Huang Zhang was asked how much the Meizu 16 will cost. And he answered: “I have already reduced the company and channel gross margin to the minimum. But if you won’t be satisfied with its pricing, choose the X8.” Previously, Mei Zhang revealed the Meizu 16 would be the best-priced Snapdragon 845 model. He even said it will be priced almost identical to the Xiaomi Mi 8. Many netizens are sure the lower version of the Meizu 16 will cost less than 2000 yuan ($293).