The Motorola P30 debuted a few days back, despite having surfaced in the rumor mill just a few numbers of times. The Motorola One and Motorola One Power, on the other hand, have been leaking for quite some time now, but the Lenovo owned Motorola has of now yet to confirm any launch date for the duo, however, we supposed the duo will be unveiled later in the month at the company’s IFA press conference.

Now, ahead of its expected unveiling, the Motorola One smartphone has surfaced on the Geekbench site. The listing hasn’t revealed a lot of details about the upcoming device, but there are one or two things we can bank on.

The Motorola one did the Geekbench test running Android 8.1 Oreo out of the box, but there are chances it may get the Android 9.0 Pie treatment. The device will be powered by an Octa-core SD 625 coupled with 4GB of RAM, but could also be made available in more than one RAM and storage options. With a single and multi-core performance score of 876 and 4299 respectively, the Motorola could well flex muscles with the Moto G6 plus with the SD 630.

If information from previous leaks does check out, the Motorola One will ditch the Lenovo’s ZUI 4.0 interface for a stock Android installation, as it is expected to launch as part of Google’s Android One smartphones. 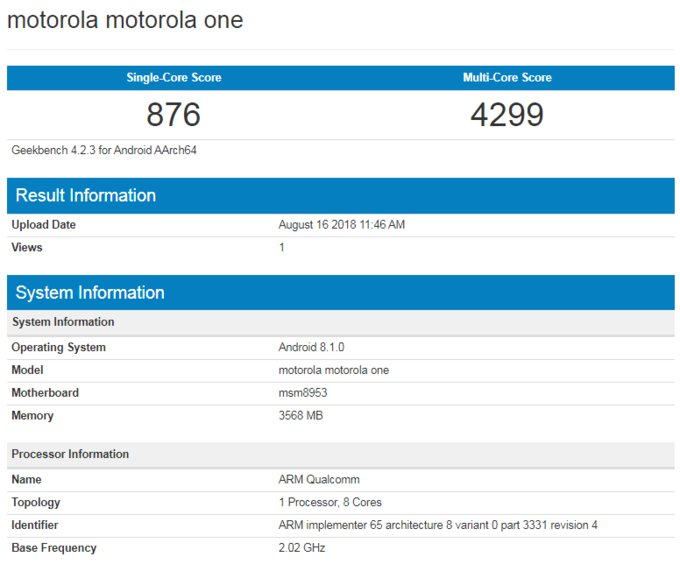 That is about all we could glean from the Geekbench site appearance of the Motorola One, however, you could feast your eyes on a couple of leaked images as well as expected specs of the device here.

Next Nokia 6.1 price slashed ahead of 6.1 Plus launch in India