After a previous leak suggested that Lenovo was aiming at the Oppo Find X, and the Vivo X21 UD with a Lenovo Z5 Pro with a sliding camera setup, a new leak from out of China suggest otherwise. While a sliding camera system is no more something mystical, some had their reservations regarding the genuity of the leaked Lenovo Z5 pro, not even after the firm received a fair dose of backlashes following the release of Lenovo z5 which turned out being an over-hyped piece of gadget.

Its been only two months since Lenovo released the Lenovo Z5, and we are already beginning to hear of a pro version of the device. While the video render that surfaced earlier in AUGUST revealed a device with ultra-thin bezels on all four sides, an on-screen fingerprint sensor, and a periscope kind of camera like we have in Oppo Find X, the latest leak reveals nothing close to all that.

The supposed render of the Lenovo Z5 pro seen below reveals a device with a full-screen display with a notch at the top, not the water-drop type of notch, while the rear is adorned with a vertically aligned dual-camera setup. There is no physical fingerprint sensor in sight, so there are two probable options- an in-display fingerprint sensor or a fingerprint sensor place on the side of the device.

Away from the design, the leaked render also gives an insight on what to expect of the alleged Lenovo Z5 pro in terms of its internal make-up.  It is tipped to flaunt a 6.5-inch FHD+ display with 2280×1440 pixels of resolution, 95 percent screen-to-body ratio and will retain the SD 845 SoC coupled with up to 8GB RAM, and up to 256GB storage. 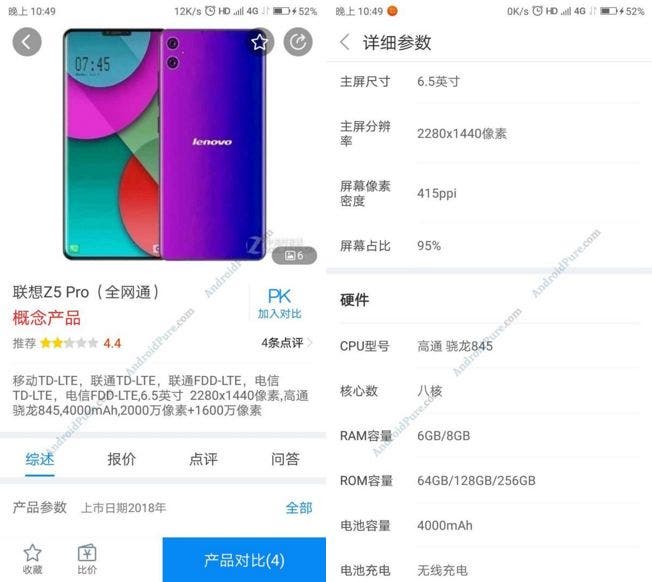 The device is expected to come fitted with a 4000mAh battery, while it might run Android Oreo out of the box. We are not exactly sure how real this leak might be, since there are now two conflicting leaks pointing to a Lenovo Z5 Pro, so we advise you take this for what it is – a leak and rumor.