As of now, only two companies have released processors based on the 7nm manufacturing process. Apple has since released its A12 Bionic while Huawei also has its Kirin 980. Qualcomm is expected to unveil a 7nm chip (SD855) later this year. On October 12th, Chinese manufacturing giant, Huawei, will release its all-new Huawei Mate 20 Pro which will be powered by the recently released Kirin 980 chipset. Now, the company has boasted that its Kirin 980 is better than Apple’s A12 Bionic. 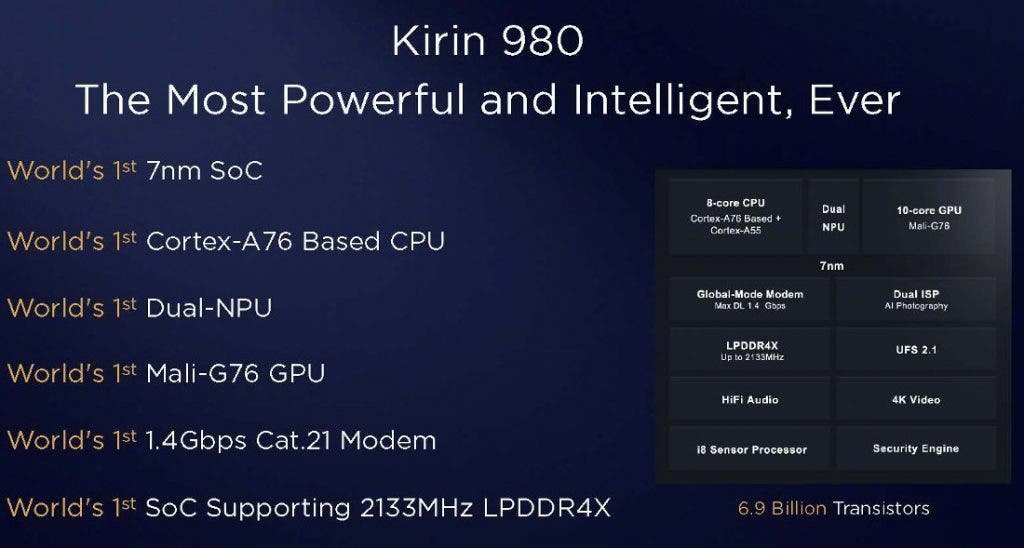 The company did not give any figures to back up its claim and we will have to wait for the Mate 20 Pro to truly test the strength of this chip. However, on paper, the Kirin 980 is looking quite promising. It features 6.9 billion transistors which makes it 75% faster than its predecessor – Kirin 970. According to Huawei, the Kirin 980 GPU has 57% more power and 75% better speed. This chip comes with dual Neural Processing Unit (NPU) setup which ensures that AI tasks become a “piece of cake” for this processor.

Looking at its network abilities, this chip supports the world’s fastest WiFi chip – Hi1103 Wi-Fi with download speed up to 1.7GBPS. It also supports LTE Category 21 with 1.4Gbps downlink.  Its GPS solution is also top-notch as it comes with a dual-frequency (L1 and L5) GPS for high-precision positioning.