There have been too many speculations concerning the upcoming beast from Huawei. But we began receiving genuine information only recently when this phone spotted in various photos, videos, and benchmark databases. According to the latter, the phone should score over 313.000 in AnTuTu and 3390/10318 in GeekBench. Yesterday, this handset was officially announced in London along with a few other astonishing products. So now it is possible to get our hands on it and test the phone. Of course, the benchmark results should be compared with other top-end models in order to understand whether the Huawei Mate 20 Pro and the Kirin 980 are capable of fighting for the highest prizes.

From the test results of GeekBench, the Huawei Mate 20 Pro’s single-core score is lower than the Samsung Galaxy Note 9, but the multi-core score is stronger. Unfortunately, it still yields the iPhone X and iPhone XS Max.

According to AnTuTu test results, the Huawei Mate 20 Pro ranks second leaving behind only the iPhone XS Max. But when excluding the latter and comparing with other Android phones, it is the absolute leader.

The GFXBench test results show that the Huawei Mate 20 Pro’s new Mali G76 chip has a much higher graphics processing power than the previous generation GPU. However, it should be noted that the Samsung Galaxy Note 9 scores more than Huawei Mate 20 Pro in this test. 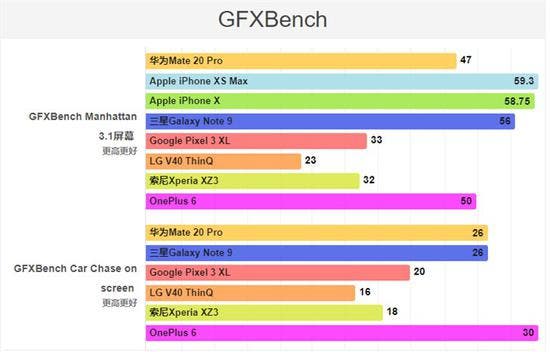 We can see that the overall strength of the Huawei Mate 20 Pro equipped with the Kirin 980 is still greatly improved, but it yields Apple’s A12 processor.