As you know, this afternoon, Lenovo held a new product launch conference and announced three new smartphones that start a new era of AI quad-camera smartphones. Among them, we can mention the Lenovo K5 Pro, S5 Pro, and K5s.

After the press conference, Lenovo Group Vice President Chang Cheng said: “The Lenovo phones come at the best prices. The first phone with such a pricing was the Lenovo Z5. But those who have been looking for a cheap phone with strong game and media capabilities, there is the newly announced Lenovo K5 Pro. At last, the best choice for photographers is the Lenovo S5 Pro.‘

At the same time, the comparison chart of Lenovo K5 Pro, Xiaomi Redmi Note 5, and Honor 9 Youth Edition was released. As shown in the figure, the Lenovo K5 Pro uses a 5.99-inch FHD+ full-screen, is equipped with a Qualcomm Snapdragon 636 processor, with up to 6GB of memory and 128GB of storage. There is also a 16MP + 5MP AI dual-camera and a battery with a capacity of 4050mAh.

As you see, all three phones sport identical features. So it’s quite interesting which of them our readers prefer. 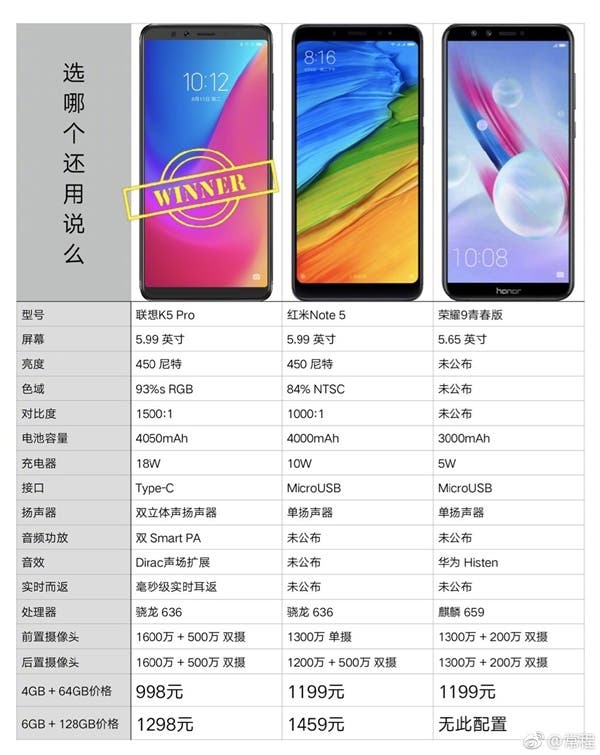